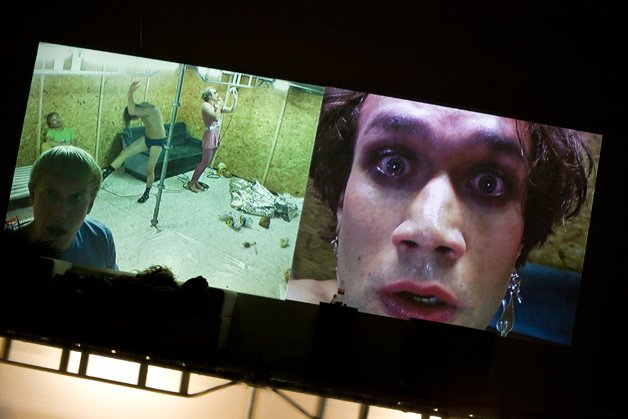 Certain images in Conte d'Amour are appropriately sinister in the era of the selfie. Photo by Robin Junicke.

How to account for the nasty critical reactions to Conte d’Amour, which range from one writer literally booing at the end of the opening night show and awarding it zero stars to another leaving midway through the performance yet proceeding to review it anyway?

The controversial collaboration between Berlin-based troupes Institutet (from Sweden) and Nya Rampen (Finland) is frequently messy, puerile and banal. But I have no doubt director Markus Ohrn intended all these things. And this much is clear: it’s certainly not boring, even though it clocks in at three intermissionless hours. (You’re allowed to exit and return as you like, although at last night’s performance about a dozen people exited without returning.)

Conte d’Amour – the ironic title translates of course to “love story” – is inspired by the sensational case of the Austrian man Josef Fritzl, who for nearly a quarter of a century confined his own daughter in a concealed part of his house’s basement, repeatedly raping and abusing her, resulting in seven children.

The fact that the father, his daughter and two of their progeny are all played by men who look to be in their 20s or early 30s helps distance us from the tabloid horrors. We’re not in naturalism mode here, folks. As one of the actors screeches at one point, “It’s symbolic!”

The set consists of two vertical playing areas, both surrounded by an obvious white picket fence. We’re first introduced to the top level, a civilized, furnished zone, where a man (Jacob Ohrman) proceeds to pleasure himself with some over-sized dolls and later, in a fit of frustration and/or boredom, stuffs chips and Coca Cola into the dolls’ mouths.

Soon, however, he burrows through a cabinet and descends into the home’s nether regions, where his movements are monitored on video camera and projected onto a screen. An opaque sheet of thick plastic obscures the details from the audience, but you can still make out shadowy bits of light and movement.

Mostly we have to rely on the video feeds, which we come to realize are from two sources: one that’s affixed to the ceiling, and another that’s from a handheld camera. Anyone who’s seen a found-footage horror film will know how to read these scenes and know what questions to ask, such as: Who’s showing us this? What’s happening outside the frame?

The first sounds we hear in the basement are also drawn from horror films: an adult in a high-pitched child’s voice pleading “I’m hungry… I’m thirsty.” These basic survival needs are significant in a show that will eventually explore the lines between animal and human, violence and mercy, abuser and abused.

When the lights come up in this nightmarish basement, things are just as scary, often enhanced by sudden jolts of booming bass sounds – another horror film trope.

Sex is introduced via a scene in which one of the children (Anders Carlsson, who also wrote the text) pretends to be a Thai masseuse for his daddy (Ohrman). Colonialism and first-world aid are savagely satirized via an attempted rescue by Doctors Without Borders and an overly long, repeated sequence involving a rubber mask and wooden African musical instruments. Various figurines are used to act out a silly, child-like good-and-evil allegory.

Oh yeah, and there are a couple of karaoke numbers, performed surprisingly well by the ensemble, that help break up the narrative and occasionally comment on the action. “Hello… is it me you’re looking for?” sings Elmer Back, in drag as the man’s daughter and mother to their two children. The line has ominous connotations.

The final third is dominated by a sense of anarchy and breakdown. A cot is upturned and used as a makeshift prison. A bunker is established between a wall and a sofa. Bodies are slapped, hair is pulled, potato chips, burgers and fries are strewn over the floor. And yet we keep on watching via those cameras.

Throughout this final section, the performers take the video camera and pose for it, sometimes doing violent or exploitative things to themselves or others. Appropriately sinister in the era of the selfie.

Is it all neat? No. Are the themes consistent? No. Is there more than a touch of youthful rage and rebellion in the production? You bet. Is it a disturbing and imaginative theatrical response to an unthinkable crime? Absolutely.

Conte d’Amour deserves your attention and ought to provoke lots of discussions. If you give it a chance, you won’t see anything like it on a local stage this year.