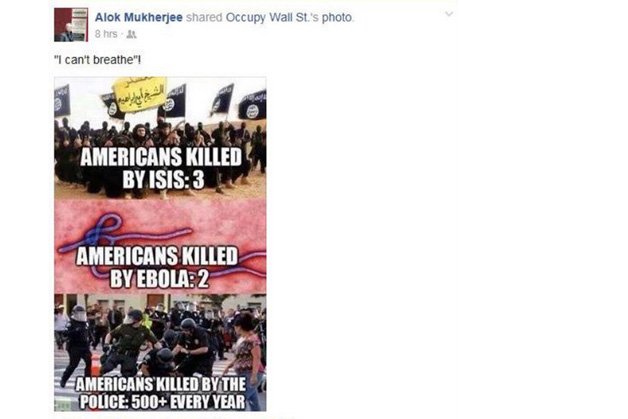 including this poster that appeared on the cover of the association newsletter.

The ongoing feud between the police union and the head of the force’s civilian oversight board escalated on Friday, when the Toronto Police Association called on the board chair to resign over a Facebook post.

According to a screen capture released by the TPA, the original caption on the image was, “Just a reminder of who the enemy is in this world.” Above it Mukherjee wrote “I can’t breathe,” a reference to the last words of Eric Garner, a black New Yorker whose death during an altercation with police set off angry protests in the USA this week.

The post was removed from Mukherjee’s page by Friday afternoon.

In a statement the TPA, which launched its own Facebook campaign against Mukherjee earlier this year, declared, “Mukherjee has crossed the line. His lack of objectivity indicates he is no longer fit to sit on a police oversight body.”

Claiming that the post showed Mukherjee’s “obvious disdain” for the police he is charged with overseeing, the TPA said it planned to file a complaint against him with the premier, mayor, solicitor general, Police Services Board and the Ontario Civilian Police Commission.

Mukherjee responded in a written statement Friday afternoon in which he said he “very much regret[s] the reaction caused by the posting.”

“I would like to make it very clear that the item was shared as a topic of interest, intended to encourage conversation and reflection,” the statement said. “It was not intended to be a negative commentary in any way on members of our police service or on our practices.”

“I have the utmost respect for members of the Toronto Police Service and I strive at all times to serve as Chair in a fair and professional manner.” 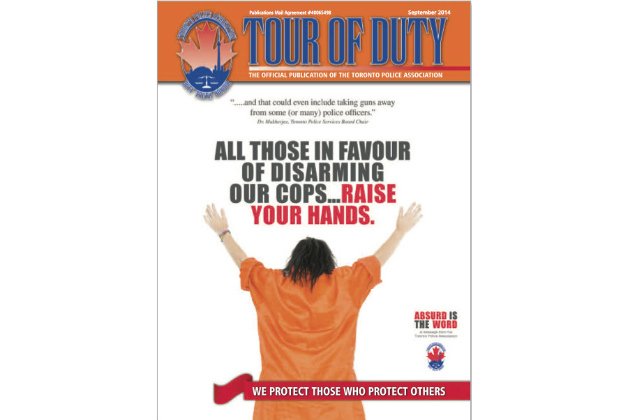 The mayor did not answer when asked if he thought Mukherjee should resign.

Tory, who took office on Monday, has identified discord between the Police Services Board and the force as one of the main problems he wants to address this term. This week he took the unusual move of having himself appointed to the board so that he could directly influence its relationship with the police.

The TPA’s demand that Mukherjee step down comes amid the politically charged climate of police contract negotiations. The current collective bargaining agreement between the city and the TPA expires at the end of the year, and the Police Services Board has signaled it intends to hold the line on the police budget, which reached almost $1 billion in 2014.

Mukherjee has been a vocal proponent of reducing the budget and overhauling the force, particularly in the wake of a string of recent high profile police shootings and ongoing controversy around the practice of “carding.” The union has criticized him before for suggesting major reforms such as disarming some officers, and employing civilians to deal with calls involving domestic disputes or the mentally ill.

In September the union launched a poster campaign on Facebook and in police units that suggested the only beneficiaries from Mukherjee’s proposed reforms would be hardened criminals.

Last month the TPA slammed the board for launching a bargaining website in which it asserted “there needs to be a break to this cycle of ever escalating costs of policing.”