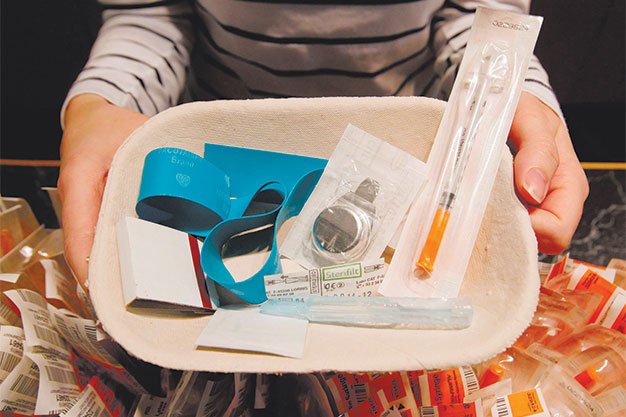 Harm reduction workers and drug users alike had essentially been left in the dark about TPH’s new pilot, the Outreach Project, which involves a partnership with police from four Toronto divisions (11, 12, 13, and 14) and prisoner rights group the John Howard Society.

This lack of transparency – the project was launched in October, and the Toronto Drug Users Union and other people who’d be directly affected were not consulted – left harm reduction workers in a state of nervous speculation. Were plainclothes police riding in The Works’ mobile outreach vans? Were they present during the highly sensitive and confidential process of rapid HIV/AIDS testing?

At a public meeting to discuss the project January 8 at Central Toronto Community Health Centre, emotions ran high as a motley crowd of about 100, including many harm reduction workers and drug users, faced off against representatives from The Works, Toronto police and John Howard Society. 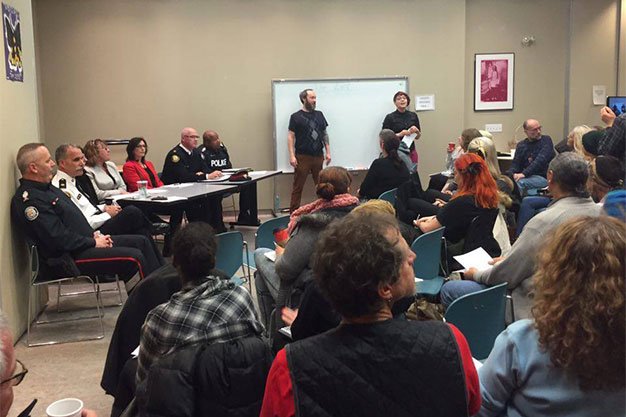 The Toronto Harm Reduction Alliance says police participation in the program has fractured the trust the harm reduction community has cultivated over decades with street-involved people.

“This makes me feel like I should just stop engaging with Toronto Public Health,” said Zoe Dodd, a long-time harm reduction worker and community activist. “I don’t recall drug users ever saying they wanted -police to be involved. This really just shows me that these agencies are more committed to their relationship with police than they are to their relationship with drug users.”

Added another man from the audience, “This is like consulting the school bully on how to make the schoolyard safer.”

It appears the program was the idea of the Toronto Police Services Board, which applied for a grant for the pilot from the Ministry of Community Safety and Correctional Services and received $99,000 for the project to address “crime prevention and community safety.”

But according to the Alliance, the real impetus for the project was the “fear-mongering views of a few neighbourhood residents” over a shelter moving into a new space at Oakwood and Vaughan.

The project put a printable form on the Toronto Police Service’s website (Dodd calls it a “snitch line”) that could be used by residents and businesses to report the presence in the designated divisions of individuals “dealing with substance abuse, poverty, homelessness and mental illness.” According to 13 Division Staff Sergeant Courtney Chambers, numerous business owners and residents also voiced complaints about a methadone clinic in the St. Clair and Dufferin area.

Eight officers now staff a team in charge of street outreach in the four divisions.

Some see initiatives like the Outreach Project as a proactive response to the negative flak Toronto police have earned for fatal shootings of people in crisis.

They say the program could also improve perceptions of police among drug users, sex workers and those living in poor and racialized neighbourhoods.

But harm reduction workers worry that having -clients interact with police in order to get harm reduction supplies, shelter or naloxone (a drug that can prevent opioid overdose deaths) could discourage many from accessing the life-saving services they need – and could also lead to increased rates of HIV/AIDS and hepatitis C.

Putting up more barriers to overdose intervention seems counterintuitive to say the least, considering that Ontario is currently suffering an epidemic of fatal opioid overdoses.

“People are not going to use our supplies because of your presence,” said one harm reduction worker at the January 8 meeting.

Indeed, the fear is that users might stop interacting with harm reduction teams altogether, regardless of whether they work for agencies that are involved with the pilot or not.

Conflating the role of police with that of social -service providers not only positions police as gatekeepers to life-saving resources, but also gives them the power to withhold help if individuals do not, for example, surrender information or otherwise comply with the law. And involvement in harm reduction potentially gives police access to shelters, methadone clinics and needle exchanges.

Police are obligated to enforce the law, and this means arresting people who have warrants out for them, are doing something illegal or lack official permission to reside in Canada. Harm reduction workers, unlike police, are often current or formerly street–involved people themselves.

Says Dodd, “People OD and die when our friends are afraid to call paramedics because they’re scared police might show up.”

While the idea of collaboration and community partnership healing an otherwise broken system may sound appealing, harm reduction workers say that communities do not need police to address issues of drug use, substance dependence and sex work.

The budgets for programs like the Outreach Project could be better spent, they say, on shelter beds, -affordable housing and mental health and addictions services.

In addition to staff salaries, the Outreach Project’s $99,000 has gone toward providing socks, coffee, mittens, naloxone kits and other supplies that, according to harm reduction workers in the audience, their organizations have lost the funding for in recent years.

Kelly Rose Pflug-Back is a member of the Harm Reduction Workers’ Union and organizer with the Network for the Elimination of Police Violence.