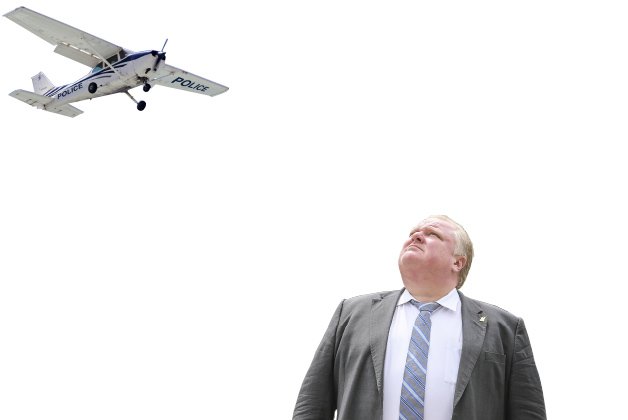 It may be the beginning of the end in the Rob Ford crack saga, or so it seems given the rat-a-tat of police leaks that followed the arrest on several drug charges of the mayor’s “friend” and alleged drug dealer, Alexander Lisi, last week.

Clearly, the heat is on. The cops didn’t reportedly dispatch a Cessna to spy on the mayor from on high (last week’s revelation number two) to see which McDee’s he was slipping into for lunch.

Just to muck up matters more, the mayor’s big brother, Ward 2 Councillor Doug Ford, who has carefully picked his moments during the crack affair, is now calling for an outside police force to conduct whatever investigation is being made into revelation number three to emerge this week: a leaked police document suggesting Lisi was dispatched to find the mayor’s lost cellphone in March in exchange for some pot.

To recap: Lisi is also the guy who allegedly showed up at the Windsor Road address of the mayor’s high school pal Fabio Basso in May looking for the cellphone video that started this whole mess – the one allegedly showing the mayor smoking crack.

But whether the cops are any closer than they were five months ago to tying up the case depends on who you ask.

Was Lisi’s arrest meant to signal that the circle is tightening? Or was it a sign of frustration that the probe is going nowhere, still playing at the margins?

What is coming into sharper focus is war within the force itself over the Ford scandal.

Are the cops closing ranks around Ford?

It’s hard to see why police Chief Bill Blair would stick his neck out for a mayor who wants to replace him as top cop. See Ford’s replacement of Blair symp Chin Lee on the Police Services Board with former budget chief Mike Del Grande.

It was Blair who refused to exonerate Ford, to say he was not under investigation, after the Project Traveller guns-and-gangs raids at the Dixon Road apartments that swept up members of the Dixon City Bloods.

The slow pace of disclosure in the dozens of arrests made during Project Traveller, which we now know were in part related to the Ford video investigation, has rightly alarmed legal observers.

And it’s surprising that the mayor hasn’t at least been hauled in for questioning about what’s already on the public record: efforts by his director of logistics, David Price, to retrieve the still-missing crack video.

Those attempts allegedly involved someone with a metal pipe showing up at the Basso home. How soon we forget. A mass exodus of key Ford staffers followed quickly after that event. Among them, the real eye-opener was the mayor’s former press secretary, George Christopoulos, a former communications coordinator for the Toronto police with a lot of connections in the force. If the boom was about to be lowered on Ford, he would know. So what’s been the hold-up?

The conspiracy of silence to protect Ford would explain why the leaks are coming so fast and furious.

The mayor has his allies on the force, and not just because of the rich contract he signed with the Toronto Police Association when he came into office.

In Etobicoke’s 23 Division, where all the action related to the crack video scandal has been unfolding, it’s the Ford Family Compact that runs the show.

Lisi said an interesting thing when he was asked by reporters about the gash under his eye following his bail hearing at Old City Hall last week.

Lisi was processed at the South Etobicoke station even though his arrest at a dry cleaner’s off Wincott took place in 23 Division.

A police spokesperson says the decision to take Lisi to 22 was “logistical.”

But it hasn’t gone unnoticed that the head at 23 Division is Ron Taverner, whose close connection to the Fords inevitably comes up when conversations with City Hall observers turn to crack.

Taverner is a personal friend of the Fords, a regular attendee at the annual Ford Fest backyard barbecue. He’s also a member of the Family Compact’s kitchen-table cabinet, which in and of itself may not be unusual. It’s in the interests of politicians to be in communication with the local constabulary.

But in the current context, Taverner’s ties to the Fords may give the appearance of a conflict of interest.

To wit: Taverner was an unusual attendee at the November 6, 2012, meeting of the Etobicoke York Community Council, showing up to speak in support of one of the Fords’ pet projects – a casino at Woodbine. Then there was that Busgate affair, when Taverner defended the decision of one of his officers to dispatch a TTC bus at the mayor’s request to pick up his players from a football game.

But it’s a politically delicate and deeply personal matter for Blair, too. He’s the one who nominated Taverner for the Order of Merit for policing in 2009.

Reading between the police lines

Much has been read into the fact that the name of homicide detective Gary Giroux showed up on the press release announcing Lisi’s arrest October 2. What’s a homicide cop doing investigating an alleged street-level drug dealer?

The obvious answer is that there’s more to Lisi’s arrest than police are telling us. The department’s corporate communications branch, which has been mum on anything related to Ford and the alleged crack video, fuelled the fire, letting it be known that Giroux’s a crack investigator, the best of the best.

It was a not-so-subtle sign that this one’s about to blow up real good.

All roads lead back to 15 Windsor Road

Basso’s North Etobicoke bungalow, where the Ford crack video was reportedly filmed, has faded into the backdrop.

It’s there where Anthony Smith, later shot and killed outside a King West nightclub, and two other known members of the Dixon City Bloods were photographed outside with the mayor.

It’s also there where Lisi allegedly paid a visit looking for the Ford video. But no charges related to that May home invasion were laid against Lisi. The conspiracy to commit an indictable offence charge against him that everyone was fixating on turned out to be drug-related.

One possible explanation for that: the cops are biding their time.

Police investigations work from the outside in. If it’s true that Lisi was caught on police wiretaps discussing the video, then the recent drug charges against him are just the beginning, a warning shot fired by the cops to prompt him to spill what he knows about efforts to retrieve the video or face more serious charges.

When Rob Ford was asked about Lisi’s arrest, he called him a “friend” and said he doesn’t throw his friends under the bus.

Was that just another of his canned clichés or was he warning Lisi to keep his mouth shut?