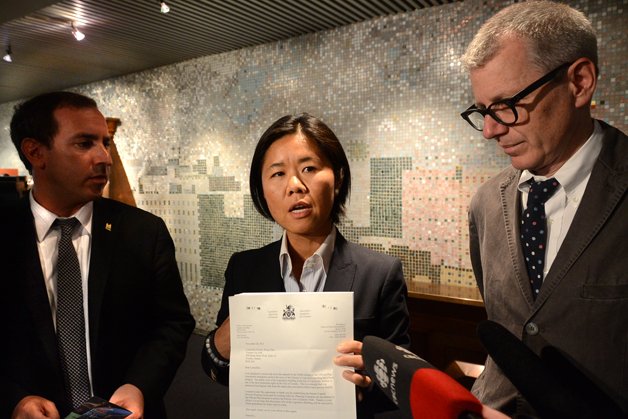 From left to right

A trio of councillors made their way to Queen’s Park on Thursday to fight against what they say is an “unethical” system that robs communities of the ability to control development in their neighbourhoods.

The councillors-Josh Matlow, Adam Vaughan and Kristyn Wong-Tam-were at the provincial legislature to speak in favour of a private member’s bill from NDP MPP Rosario Marchese that would free Toronto from the jurisdiction of the Ontario Municipal Board.

The OMB, while not well-known to many Torontonians, has sway over how the city grows. A quasi-judicial body made up of provincial appointees, it has final say over planning disputes. When developers can’t agree with the city on the scope of a development proposal, they can appeal their case to the OMB. Because it has no obligation to abide by the city’s planning policies, the board can approve proposals that the city has denied.

The result can be oversized developments that are opposed by the local councillor and community.

“It actually affects the residents of Toronto because it determines whether or not the city can follow itsown planning guidelines,” said Councillor Wong-Tam at a City Hall press conference on Thursday.

As one example, she cited a proposal in her ward for a 30-storey, 322-unit condo at 365 Church Street. The building would be taller than anything around it and city staff determined it would “set a negative precedent.” Residents worried about the size of the building, the loss of privacy due to the condo units overlooking neighbouring properties, and an increase in traffic and noise.

Wong-Tam spent months working with the developer, Menkes Developments, and the community to try to broker a compromise. She asked the developer to table alternate proposals for a 15-, 20-, or 25-storey building, and negotiated for the developer to provide a package of Section 37 community benefits. She thought she had a deal but she says the developer backed out, went to the OMB with a 30-storey proposal and won. The bigger plan is going ahead, and the Section 37 benefits were lost.

“That decision I can tell you sent ripple waves across the planning department because we’d never seen anything like that before,” said Wong-Tam.

“If you don’t like a building in your neighbourhood, you ought to know who was in charge of putting it there,” he said. “And you ought to be able to hold them to account.”

The system is skewed, Vaughan contends, because developers can afford to pay lawyers to argue their case at the board, but local residents don’t have the resources. Each hearing can cost tens of thousands of dollars.

The process is costly for the city as well. In 2011 Toronto spent nearly $375,000 on outside planners to fight OMB appeals, in addition to many hours of work done by the planning department.

“The OMB works very well for the developers, doesn’t work so well for individuals,” said Vaughan.

A representative of BILD Toronto, the developer’s association, did not return a request for comment.

Despite the controversy around the OMB however, most development proposals never end up before the board. In 2013, the city received 606 development applications, and only 24 were appealed at the OMB.

And recent reports indicate that the city doesn’t lose most appeals. According to a January 2013 briefing note by city legal staff, in 2011 the city only lost eight of 46 development application appeals. It won 15, and 23 resulted in a settlement, which legal staff considered a favourable outcome. The city lost only seven of 43 committee of adjusment appeals, which generally deal with more minor property use disputes.

In February 2012 council voted 34-5 to ask the province to overhaul the OMB to give Toronto more authority, but not everyone at City Hall agrees that the city should free itself from the board. Mayor Rob Ford told reporters on Thursday that it’s necessary to have an independent appeal body and that the OMB is working “fine.”

“Not everyone’s happy with the OMB decisions but it’s a process and I think it’s fair,” he said. “I’ll never support abolishing the OMB.”

Jennifer Keesmaat, the city’s chief planner, favours reform of the OMB instead of ending its jurisdiction over Toronto. At least as concerning to her as fights over specific development proposals is the control the board wields over high-level policies. For example, she says that her department just spent two years writing a 600-page report about protecting employment lands. The review was mandated by the province and approved overwhelmingly at council.

“Now we will spend another year or two defending it at the Ontario Municipal Board. Once we’re done defending it, we’ll be required to begin the review again,” she said. “The system is an absurdity.”

She says that simple changes like placing a five-year moratorium on appeals of major planning policies would go a long way to giving Toronto greater autonomy. So would switching to an area-based planning framework, instead of studying each disputed development on a case-by-case basis.

The NDP member’s bill to end the OMB’s jurisdiction over Toronto has passed second reading and is at the committee stage. Whether or not it reaches the third and final reading is up to the Liberal government, and while the Premier Kathleen Wynne has yet to tip her hand on whether she supports it, a spokesperson for the Ministry of Municipal Affairs and Housing suggests the government won’t abolish the OMB’s jurisdiction without something else to take its place.

“The elimination of the OMB, without the establishment of an alternative appeal body, would result in the court system being the only forum for land use planning disputes,” wrote May Nazar of the MMAH in an email. “The government is currently reviewing the Planning Act to look at opportunities to improve the land use planning and decision-making process. We are considering the input received through the review.”