A Tribe Called Red bring politics into the party by reimagining the pow wow tradition, flipping the script on cultural appropriation in electronic dance music 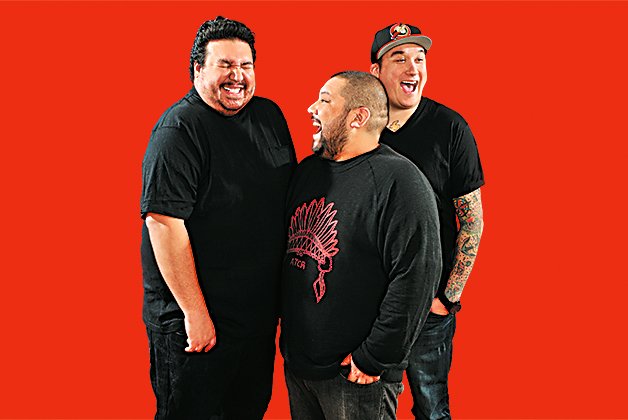 They’re in high spirits for good reason. The DJ collective’s self-titled 2012 debut album made it onto numerous year-end lists all over the world, and was long-listed for the Polaris Music Prize. Not bad, considering they released it for free download without the backing of a record label.

Their innovative blend of underground club sounds with pow wow music has reached a much wider audience than they’d imagined when they started throwing their monthly parties in Ottawa in 2008. And no one could have predicted the role they’d play in promoting a wider dialogue around aboriginal rights.

ATCR’s club bangers might not explicitly preach a message, but there’s no mistaking the inherent meaning of indigenous people recontextualizing their own culture – especially when contrasted with the ham-fisted appropriation of “ethnic” music and culture that once went largely unquestioned in dance music.

“If you’re First Nations in Canada, just the fact that you’re even alive is a political statement,” says Campeau with a smile, although it’s clear he’s being deeply serious.

“There’s a long history of aboriginal people not having control of our own image,” says Witness, carefully explaining why they insisted on being consulted on NOW’s concept for the photo shoot.

“We’re always being looked at through the lens of colonialism, and we’re never portraying ourselves. We’re starting to take control of that, but it’s really just beginning. Something as simple as being photographed laughing can start to change the way we’re perceived, and challenges the stereotype.”

Only a few days after this afternoon spent chatting with ATCR about representation issues, a tacky “cowboys and Indians” costume party at a T.O. bar provides the perfect example of the reality the three DJs live every day (see story, page 30).

The dailies tried to spin that particular incident as some kind of angry confrontation between protesters and partiers, but in reality it was a much more nuanced dialogue. It was the media that amped up the encounter, oversimplifying it to fit the established narrative.

“Last year in Toronto, a few non-aboriginal kids showed up to our gig in war paint,” remembers Witness. “Nothing really happened that night, but when the photos were posted later on Facebook, everyone freaked out.

“In the end, though, what came out of the incident was some real understanding. We explained to them that this isn’t honouring us and it isn’t a celebration of our culture, that we actually find it inappropriate.”

“You have to stumble to learn,” adds Campeau. “They’re not showing up in war paint to make fun of us. They just don’t understand. It’s coming from a standpoint of childlike ignorance, and that’s fine. You just have to teach people, and that’s what we’re trying to do through our music.”

It’s hard for some people to see how thumping dance music can be as political as an angry punk song or an earnest folk ditty. And to be fair, the historical relationship between house music, Stonewall and the larger struggle against discrimination isn’t always that easy to spot in 2013.

But when it comes to what a Tribe Called Red are doing, you can’t separate the politics from the partying.

“I was raised in a hardcore activist environment,” Witness says. “My mom is seriously political and was part of the American Indian Movement in the 70s. But by the time I was in my late teens, I was burnt out. I felt like I was banging my head against a wall. I said, ‘Forget this, I just want to party and forget about all this stuff I’ve had to deal with my whole life.’ I became a full-on raver kid for years, and that’s how I got into DJing.

The band’s sound is indisputably unique, yet it works in an impressively wide range of settings, from EDM festivals to art galleries. General is a turntablist champion with a serious love of hip-hop (and prefers to let his fingers do the talking), while Witness has roots as a dancehall DJ and Campeau ties it all together with a background in electronic dance music.

That energetic cross-genre approach is what attracted major players like Diplo to pledge support early, and it’s also what made their Electric Pow Wow parties the hottest night in the Ottawa club scene.

They’re not quite ready to portray themselves as visionaries, though. Instead, they credit their success to good luck and perfect timing.

“I don’t know if people from our own community would have been ready to hear pow wow music being remixed and played in clubs 10 or 15 years ago,” says Witness. “But we’ve also had a lot of fans come up to us saying, ‘I’ve been waiting for this’, or ‘I’ve been thinking about this for years.’ It’s something that was building up, and this was just the right moment for it to happen.”

Originally, they had no larger ambition than throwing a good party.

“I had a lot of friends who were going to South Asian parties in Ottawa,” recalls Campeau “There were also Korean events happening around town, and when I noticed that all these crazy parties were poppin’ off that were ethnically specific, I started talking to Bear about showcasing the fact that we’re First Nations DJs who live in the city.”

“It was also about creating a space for our community within the club environment – creating a space that our people would be comfortable to come out to, the same thing these other culturally specific parties were doing for their own communities,” adds Witness.

The concept clearly tapped into a hunger they hadn’t suspected. It’s almost too perfect that Idle No More erupted and continues to develop alongside their own artistic growth. A Tribe Called Red consistently use their profile to bring more attention to that political struggle, and there’s a sense that a wider moment of awakening is happening, in the minds of native and non-native people. But if something is indeed changing, why now?

“It’s Twitter,” Campeau says without hesitation. “100 per cent, it’s about Twitter and Facebook – being connected like that and being able to share information. You can get a round dance flash mob organized in a day, and that kind of connectivity has never been there before.”

“It’s something we’re seeing the world over with aboriginal people, or any oppressed people. Social media has really changed things,” Witness continues.

“I remember when things started in Mexico with the revolution in Chiapas, they threw out all the foreign observers and reporters. Part of my family is from there, and we had a fax machine, so we’d be getting faxes all the time because no other information was coming out. I think this is something aboriginal movements have jumped on – using technology as a way to get the word out.”

In many ways, that’s exactly what A Tribe Called Red have been doing on an artistic level: using digital tools to take back their own stories.

A Tribe Called Red discuss the various ways of dealing with racist imagery in popular culture.

Bear Witness talks about how he uses video projections and found footage at their live shows.