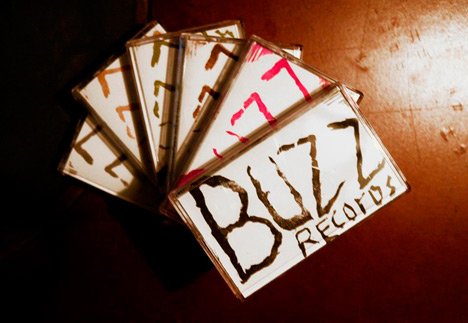 The young musicians behind Buzz Records aren’t only forging a modest new DIY scene in Toronto they’re also self-documenting it.

If you’ve ever been to a show at the noise/punk/trash label’s residential headquarters/makeshift Chinatown venue The Garage, chances are you’ve noticed a merch table littered with cassette tapes. In conjunction with fellow new local label Not Unlike, Buzz has recorded every concert they’ve thrown at The Garage since June 2011 and sold them at shows for two bucks a pop.

Now that the venue has “gone into hibernation” for the winter, they’ve decided to migrate the Live @ The Garage tape series to a few select record stores around Toronto. Available starting this week at Sonic Boom, She Said Boom, Kops, Rotate This! and Hits & Misses, anyone with a tape deck or Walkman can relive the mini-underground Garage scene.

Though it’s limited in its scope, the cassette format matches the throwback indie mindset of the label, a remnant of a time when “indie” was an ethos rather than a genre and bootlegs were still widely traded in other places than file sharing sites.

“As much as people like to complain about cassette being outdated, it’s still the cheapest analogue format,” says label co-owner Denholm Whale, who also plays bass in Odonis Odonis. “It’s part of the culture for us. Most of the bands we play in and travel with only have tape decks in their van, so it’s a bit of a practical thing, but there’s also a warmth to tape that adds a character to low-fidelity, rather than abuse it.”

Where individual installments are available at shows or directly from Buzz label Whale and Erik Jude (guitarist for the band Hussy), record stores are selling “mystery tapes”, each a pack of three random tapes culled from the series’ 23-deep collection. Considering the venue has hosted everyone from Hooded Fang to Doldrums to the Dayglo Abortions, it’s a bit of a stylistic gamble, but for $5 it’s also pretty low-stakes. Besides, the Live @ The Garage series is as much about the venue as it is about the bands that play there.

“They’re about the performances, but they’re also about the character of the event,” says Jude. “It really shows what’s going on there, including the problems and risks associated with running a DIY venue.”

As an example, Jude and Whale point me towards Side B of the 8th tape, featuring Planet Creature and Rituals (streaming below).

“During Planet Creature, there’s a conversation going on really close to the mics, and it almost plays like a narrative,” says Whale. “There’s a guy and a girl flirting and talking about hooking up, and it’s all overtop this song. Planet Creature probably played a bunch of songs without the talking, but it seemed so weird and cool that we felt it’d be better to include it.”

The Rituals performance (second and third song) has a similarly unusual back-story.

“They were finishing their set and the police just burst in,” recounts Jude. “You can hear them turn down the PA and suddenly everyone’s saying ‘it’s the fuzz!’ We got fined nearly $400 for that show, but the ticket that the cop gave me looked like a fourth grader wrote it. I think it said ‘nose violation.’ Luckily when I went to fight it I got one of the few arts-friendly judges, and she ended up reducing the fine. Now we’re really careful to end our shows before midnight.”

The tape series’ other most unusual performance isn’t actually a performance at all. Performing between Moon King and Hooded Fang, singer-songwriter Sean Nicholas Savage strums the first few chords of a song then stops, says “I’m having trouble grasping reality right now,” drops his guitar and walks off.

“We barely saw him for the rest of the night,” says Jude. “Someone even tried to buy a record from him and he said he couldn’t do it. He was just in another world.”