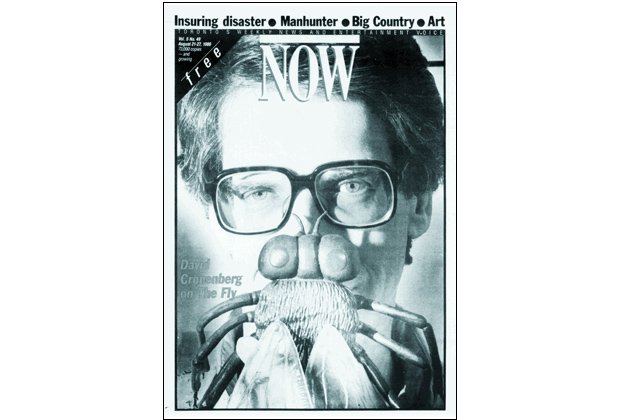 NOW’s always had a grip on Cronenberg’s talent, thanks to our late film writer, John Harkness, who was a huge admirer. In our August 21, 1986 cover story (nowtoronto.com), however, he worried about the enthusiastic response Cronenberg was getting for The Fly (page 13 of the issue). Would the horrormeister sell out?

Clearly not, according to CSA presenter Jay Baruchel, who spoke passionately about Cronenberg’s influence and weirdness. Actor Viggo Mortensen (A History Of Violence, Eastern Promises and others) called the American Academy’s failure to recognize Cronenberg “utter bullshit” – a moment that was so authentic, you almost forgot this was a showbiz event.

Then Cronenberg capped it all by almost crying when he thanked his wife for her support over the years.

The tribute restored the dignity host Short and his writers had sucked out of the evening with an opening monologue and song that sank to unbelievable depths, demeaning the film and television artists the event was supposed to celebrate.

Short’s Rob Ford jokes (“Glad to be back in Toronto now that we’ve legalized crack”) were unfunny.

He hit his lowest low in a pathetic ditty that encouraged the women who lost in their categories to come to Uncle Marty: he’d make them all feel better. The ick factor went off the charts when he descended into the audience to sing directly to some of the (mostly young – like 40 years younger) female nominees.

Later, Short came back for a sketch dressed as the puppet Leon and delivered a punchline about Dave Foley looking like the bouncer at a lesbian bar.

There’s an irony here. The filmmaker famous for his creepy-crawlies was the epitome of class, leaving the creepiness to the host.

Plus, Adamson Barbecue's anti-lockdown double-standard, Canada's Achilles Heel on human rights and in defense of Britney Spears in reader mail.