NOW MagazineCultureA case for the asterisk: it’s time to stop sweeping Canada’s colonial past under the rug

A case for the asterisk: it’s time to stop sweeping Canada’s colonial past under the rug 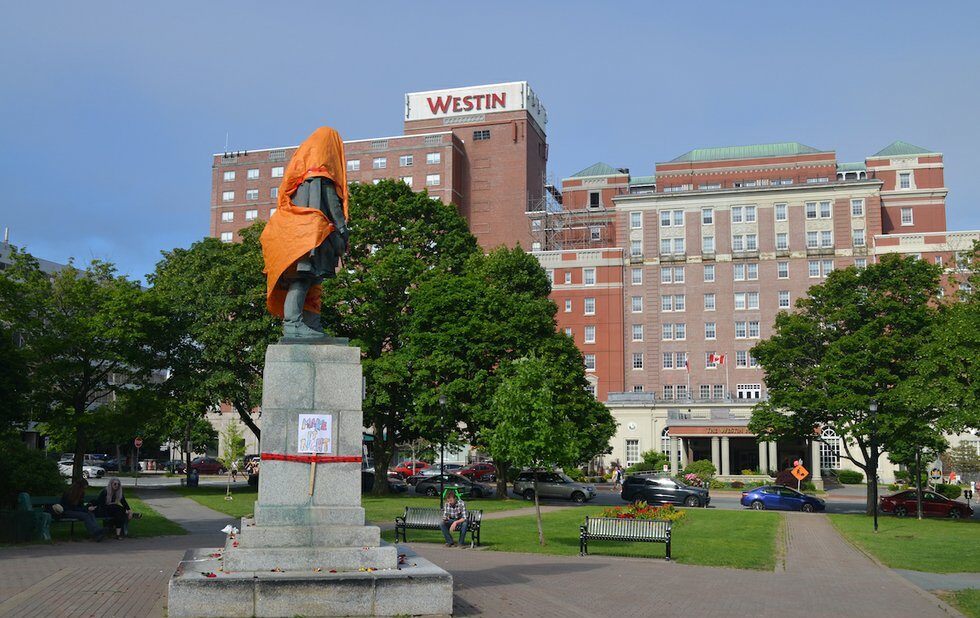 The publisher formerly known as BookThug is now Book*hug.

In the process of changing its racially charged name, the Toronto-based indie press is temporarily branding itself with an asterisk. The revised moniker appears on its website, social media and recent book releases. This spring, all of its new releases will carry an asterisked logo, which means that co-owners Jay MillAr and Hazel Millar may repeatedly find themselves having to explain the asterisk.

And that’s a good thing.

It’s good because the asterisk is a constant reminder of the name’s problematic history, and the company’s complicity in using it.

“We’re not trying to shy away from the problem and the reason we’re changing the name,” says MillAr. “We’re trying to be as transparent as possible, because we think it’s an issue worth knowing and talking about.”

Visually, the asterisk calls attention to something being censored. It disrupts how many have come to complacently view the word “thug,” which stigmatizes people of colour, particularly Black people. Nevertheless, it’s an association that isn’t readily understood or even accepted by people outside of those communities.

If you’re holding a Book*hug publication, the natural reaction to the asterisk would be to ask why it’s there. Until their official name change, it’s on the onus of the company to continually answer for it.

In this context, an asterisk keeps one on the hook. It says that whomever or whatever is being celebrated or offered up as cold fact comes with a condition.

As the fallout from the unfettered Canada 150 celebrations forces us to reassess historical legacies, what if we applied an asterisk – proverbial or otherwise – to statues, films and the like – instead of removing a statue or cutting a problematic actor from a film?

On January 31, a statue of Edward Cornwallis, a British military officer credited with establishing Halifax, was removed from a public square after a 12-4 city council vote.

Cornwallis played a role in a 1749 proclamation offering bounties for the scalps of the region’s Mi’kmaq people, who fought against the forced settlement of their land.

That part of Cornwallis’s legacy was largely brought to light by Mi’kmaq elder and historian Daniel Paul. He told The Guardian: “The scalp proclamations were never talked about. I had heard them when I was young, but never seen any proof or anything. And of course Caucasian historians never talked about them.”

Paul celebrated the removal as a vindication of his scholarship. Decades of his research fell a statue that occupied a prominent place for almost 90 years. He should celebrate.

Where were their decades to uncover, process and contend with Cornwallis’ genocidal history?

As opposed to this issue in the U.S. or Germany, countries well aware of their problematic figures, Canadians know scant about the terrible deeds of our historical figures.

Our national mythology is based on erasure: the literal erasure of peoples and the symbolic erasure of their stories. In this context, removal can serve our country’s tendency to deny the truth of our violent racist and colonial history by sweeping the fact it even exists under the rug.

In late January, Ryerson University applied a proverbial asterisk to its statue of Egerton Ryerson by installing a plaque that calls out the school’s namesake for his role in the design of Canada’s Indian Residential School System. It reads in part: “…children in the schools were subjected to unthinkable abuse and neglect, to medical experimentation, punishment for the practice of culture or languages and death. The aim of the Residential School System was cultural genocide.”

The plaque was a collaboration between the school’s Indigenous Students Association, Indigenous Students Rising and the Aboriginal Education Council. Ryerson has also committed to providing more scholarship funding for Indigenous students and doubling the number of Indigenous faculty as part of its 15-goal report, Truth and Reconciliation at Ryerson University: Building a New Foundation for Generations to Come.

But this isn’t an argument for keeping contentious statues up or names intact. Proponents may argue that removal is an erasure of history, but keeping the statues up as they currently stand, with triumphant poses and uncontested narratives, is also an erasure of history. What’s being called for is a longer period of accountability, putting those unaware of problematic histories into the uncomfortable position of having to be confronted with them.

Which brings us back to Book*hug. Whatever it changes its name to, the books printed with the asterisked logo remain as a persistent visual reminder a witness to that period in the book house’s life when it had to course correct on a name it benefitted from even as it stigmatized others.

Engaging in that period of processing is key. The Cornwallis statue was vandalized before it was removed. Someone splattered red paint on the statue and its base. It looked like Cornwallis had blood on his coat. The city and, later, protesters also covered the statue with tarp, concealing it from view. The vandalism was an illegal act, but the graffiti made a highly noticeable, symbolic statement. It called attention to the statue and it raised the question as to why the paint was there.

This too is a kind of asterisk, and it’s a potential way forward. What would happen if cities started commissioning public art interventions on their problematic statues? What if visual reminders disrupted how we’ve come to complacently view them, particularly if context were provided and artists from impacted communities were commissioned?

What you would have is a compelling, consistent reason for people to stop and reflect.