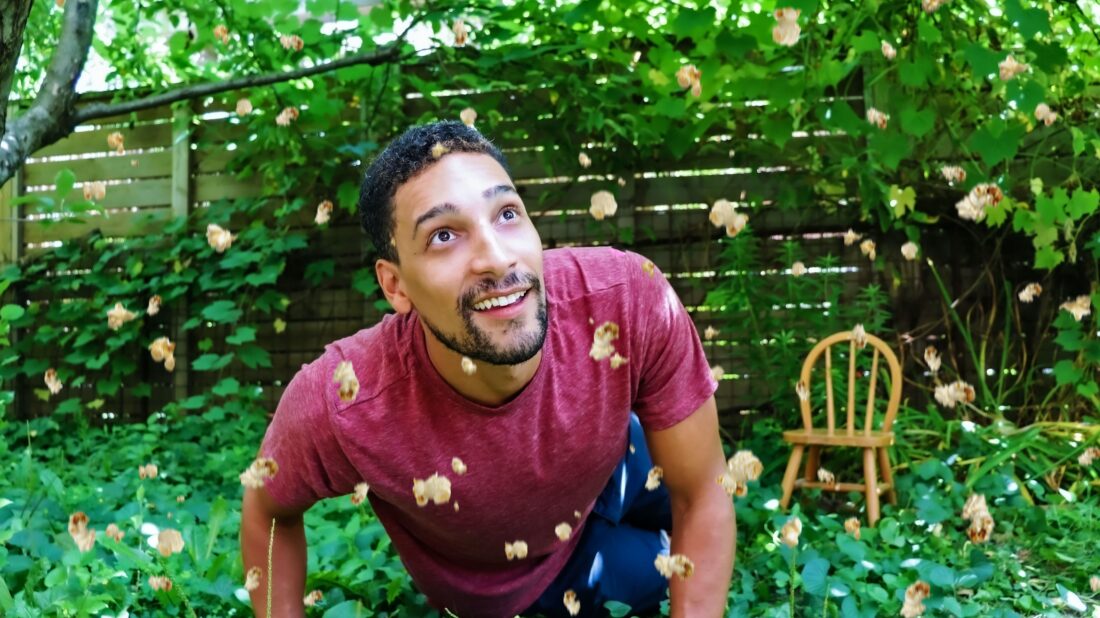 There’s lots of excitement around Alphonse, which is being billed as the first live, in-person play in Toronto since the COVID-19 pandemic.

But for actor/director Alon Nashman, who’s lived with Canadian-Lebanese writer Wajdi Mouawad’s solo show for more than 20 years, it’s also an ideal play for the current moment of anxiety and uncertainty.

“Alphonse is an affirmation of so many things that we’ve had to forgo these past few months,” says Nashman, artistic director of Theaturtle, who is co-presenting, with Shakespeare in Action, the show in two Toronto parks.

The show is about a lost boy wandering a road who spins a series of stories, all while various people are looking for him.

“The play celebrates the world of the unseen – the Invisible is a character in it,” says Nashman. “It’s about the non-literal, the imaginative, the creative: all the things we dream and see in our mind’s eye. So it’s great that a show about these things is allowing us to gather together again and reaffirm that theatre is an essential service.”

Nashman is doubly excited because, while he’s playing the title role at some performances, he’s also directing actor Kaleb Alexander in the part.

“It was time to pass the Alphonse baton to someone else,” says Nashman, who has performed the play live in theatres and festivals across the globe. He met and bonded with Alexander on two of Canadian Stage’s Shakespeare in High Park productions.

“I immediately thought of Kaleb for the role,” he says. “The flame within him matches the intensity of this play. It’s been such a beautiful experience for the two of us to pass the role back and forth.”

Alexander, who recently won a Toronto Theatre Critics Award for best ensemble in the explosive play Pass Over, says Nashman didn’t direct him to deliver the same performance.

“Our first conversations about the show were on the phone, not even Zoom,” says Alexander. “Alon told me how he’d do something, but then say, ‘I want to hear what you bring, I want to hear what comes out of you.’ So I played around, all through voice. For a play with so many characters, it was fun to be able to turn into someone else so quickly. And gradually we looked at how to take things that were drastically different and make sure both interpretations told the same story.”

Rehearsing an in-person show was a challenge.

“Finding space has not been easy,” says Alexander. “For our first week, we went to Alon’s house. Alon was on the porch, I was on the lawn and our stage manager was off to the side. We were all more than six feet apart. Every morning I’d be shouting these wonderful monologues and stories, and Alon’s neighbours could see and hear me. But it was great because, in a way, that is what theatre is. We make it with glue and sticks.”

As for health and safety precautions, Nashman says many people are working behind the scenes to ensure they follow guidelines.

“There’s a carefully calibrated entry into the space and there are separated pods for the audience outlined in white circles,” he says. The circles can fit as few as one and as many as six, depending on who you’re with. The maximum capacity is 75. “We’re going to make sure that we represent the theatre community well. Hopefully this paves the way towards more live performance and more opportunity for artists.”

Nashman has starred in half a dozen plays by Mouawad, including Stratford’s acclaimed 2019 production of Birds Of A Kind. Before the pandemic, he was set to star in Birds when it transferred to Crow’s Theatre this winter. And in mid-March, Alexander was rehearsing for his first season at Stratford, in which he had roles in three plays.

But working on the play Alphonse has given both artists a sense of hope – about the future in general and the future of live performance.

“One of the things that Alon first told me was that this play is meant to bring hope and joy,” says Alexander. “And I think in a time with so much fear, when things are so dark and dismal, this play really can inspire hope and make kids and adults alike smile and see something hopeful in the future.”