Why Trump is able to neutralize #Resistance art 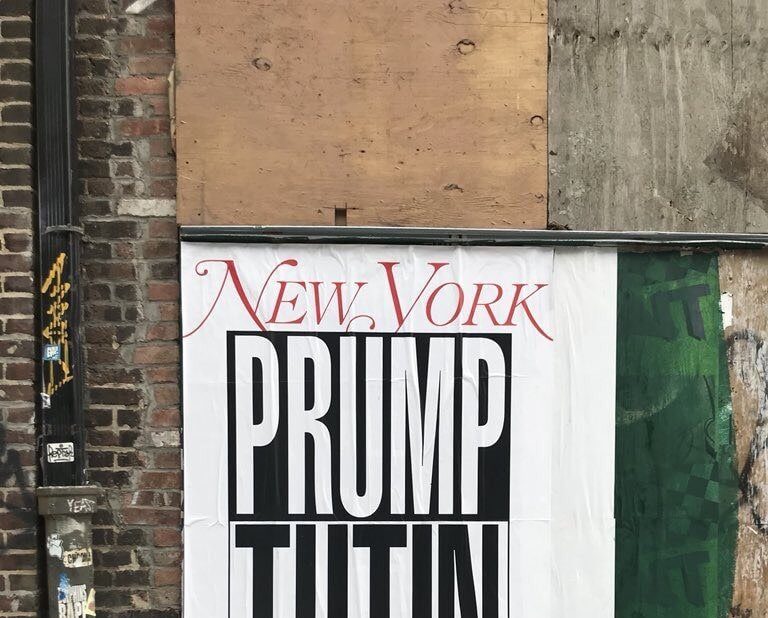 If the art world needs a contrarian, Anna Khachiyan can oblige.

Along with Dasha Nekrasova, Khachiyan co-hosts the podcast Red Scare. The New York duo’s weekly,  often provocative, look at cultural news already has healthy base of Patreon supporters since launching in March. Part of the so-called Dirtbag Left, Khachiyan and Nekrasova are caustically skeptical about the niceties of mainstream liberal thought.

In balancing an indulgance in bad taste and being reactionaries, the Red Scare duo sometimes risks sounding like an internet troll act. But as a writer, Khachiyan is a too-rare voice in a world that’s voguish for art best understood through moral positioning. Her recent essay Art Won’t Save Us tackles why so much political “resistance” art aimed at U.S. President Donald Trump is ineffectual, and argues what’s needed is more critical thinking around the power big tech companies have over our lives.

In town on Friday to speak at Art Toronto, Khachiyan chatted with NOW over email last week.

Your essay is a series of propositions that ends with a stunning observation, one I haven’t seen anyone else make. But before we get to that, I want to ask: You dismiss political art like Barbara Kruger’s PRUMP/TUTIN poster as “vapid sloganeering.” But, to state the obvious, isn’t that what artists do: work with visual elements?

It goes without saying that artists primarily work in a visual language. But there’s a difference between understanding something in aesthetic terms and insisting on its moral significance. The sense you get with all this anti-Trump political #resistance art is that it’s aggressively propagandistic yet bizarrely phoned-in.

What’s especially bad-faith about the propagandizing is that it’s not in service of some political agenda, but rather personal consolation and mutual flattery – not so much anti-Trump as pro-themselves. These people are so scandalized by Trump’s persona precisely because they’re so removed from Trump’s policies. On a more basic level, the aesthetics are just so corny as to be embarrassing for everyone involved. The art world has lost sight of the fact that artists are under no moral obligation to be role models, which is what made them such compelling interpreters of reality in the first place.

I disagree on the aesthetics being corny. I’d say Kruger’s work is more classic protest style. Art gets part of its power from finding new relevance for visual formats. But I agree that artists who want to be role models are misunderstanding their role. In your essay you write that art needs mass appeal to have political force. What are you thinking exactly? TV has mass appeal, art typically does not.

I’m thinking more of the Soviet mode of socialist realism. The Soviets came the closest to successfully engineering the total collapse of art and life. But it came at a cost: the tyranny of an enforced style. Interestingly, in America today you also have the presence of an aesthetic and ideological monoculture, though the difference is that it’s not so much enforced from the top down as self-enforced.

The claim that I made in that essay – that the Trump administration is the first properly capitalist realist “regime”– is crucial to the degree that it has been able to successfully absorb and neutralize artistic dissent. Trump parodies himself so well that any form of protest art, whether earnest or satirical, falls flat. That’s why that classic protest style you mention looks so ill-suited to the current context, and is also why mainstream TV political comedy like Saturday Night Live or The Daily Show are equally cringeworthy.

Your comparison of the received wisdoms of today’s art milieu with Soviet realism is useful. As I mentioned, your essay offers another powerful insight: a reluctance in art circles to grapple with “the systemic dangers lurking… in the digital networks… governing our everyday existence.” You’re right. Platforms such as Facebook, Instagram and Twitter should be a focus of art’s political talk and action, but they aren’t. Any thoughts on why?

Well, for starters, it’s a daunting proposition – not only from the standpoint of our willing participation in these networks, but also in the sense that the language we use to understand them is unwieldy and not agreed-upon. That is, before anyone can launch a systemic critique, let alone a concerted action, we first have to author the theory around it. “Platform capitalism,” for instance, as a particularly aggressive exponent of neo-liberal orthodoxy, is for the most part uncharted territory.

If you really want to psychoanalyze it, there’s also the question of the art world’s collective guilt. As I’ve said before, these [artists] are the people who are least likely to be meaningfully affected by any of Trump’s policies, so they’ve re-routed all of their energies into performatively grandstanding over his persona. But a politics that privileges affect and sensibility over society’s common interests will always be toothless. The art world’s power players, at least subconsciously, know this about themselves. They know their unwillingness to part with their power, however narrowly defined, is precisely what makes them so powerless, so they’ve overcompensated in the opposite direction.