The Art Of Banksy exhibit is utterly vulgar

Unauthorized retrospective of the British street artist's gallery work is a reminder that desperate “punking” of capitalism is still capitalism. And nothing but 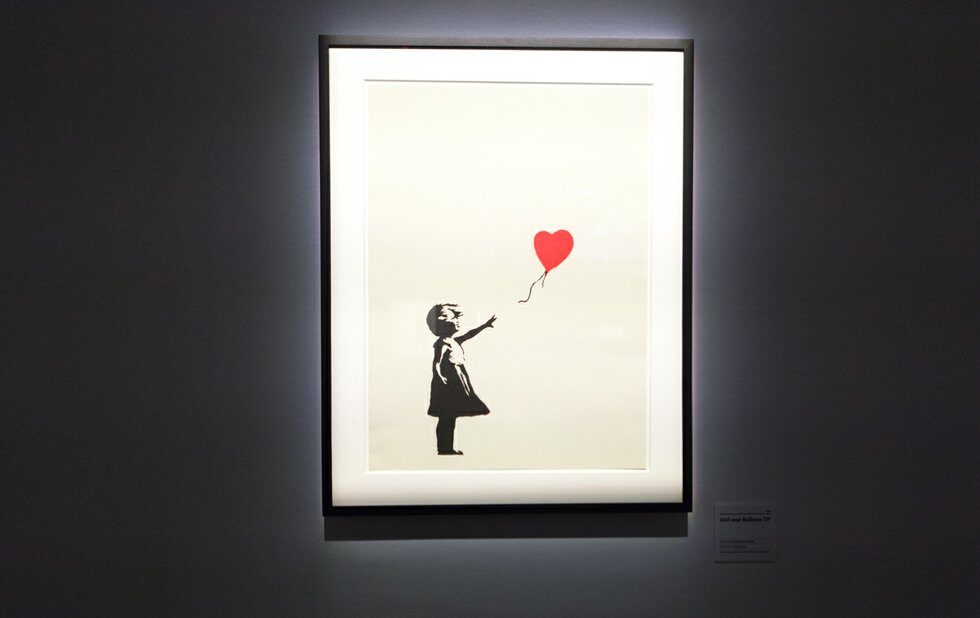 Banksy's Girl With Balloon is one of the artist's most famous works.

In grade 9, over lunch in the cafeteria, my best friend showed me a drawing he was working on: a lithe, sinewy angel, muscles drawn taut in agony – the kind of thing clearly inspired by artist Derek Hess, whose artwork graced all the relevant emo album covers and metalcore t-shirts of the era. The angel was headless.

“It needs something,” my friend said. “For the head.”

“How about a TV?” I offered up. “But there’s nothing on it. Except like static. Or those coloured bars.”

And that was that. Before long we were looking at a sad, leanly muscular angel whose head was a busted TV. It was perfect. An acerbic comment on… hmmm… the media? Pain? Angels? It didn’t really matter. What mattered was that to two pimply and ugly 14-year-olds it felt vaguely cool and even more vaguely about something – even if we weren’t sure what.

This TV-headed-angel jumps to mind whenever I think about or actually see the work of the iconic, reclusive graffiti artist Banksy.

Banksy (whose real name is unknown, which is all part of the prankster fun of Banksy, we’re led to believe) produces urban objets d’art that similarly mash up signs and signifiers with adolescent abandon: a cop with a smiley face a protester hurling a bouquet of flowers in lieu of a molotov cocktail a Winged Victory of Samothrace statue with a CCTV camera for a skull.

Anyone interested in this stuff can get their fill at The Art Of Banksy, an unauthorized touring exhibit in a retrofitted brick loft space on midway-gentrified Sterling Road, conveniently located a stone’s throw in any direction from a CrossFit-branded gym, a microbrewery, a Drake outpost, a few in-construction condos, and other markers of a city in flux.

“When we were thinking of where to bring this show,” curator and ex-Banksy affiliate Steve Lazarides told assembled media, “We thought, ‘Why not Toronto?’”

To locals enthralled by the cult of Banksy – and there are, no doubt, many The Art Of Banksy has already moved an estimated 50,000 tickets, at $35 apiece – such a show is bound to seem monumental. It’s a chance for ever-aspirational, perpetually on the cusp of World Class City-status Toronto to be put on the proverbial map.

To those who regard Banksy (and even more so, the well-heeled collectors and speculators who spend millions acquiring ostensibly anti-capitalist, anti-imperialist art pieces) with a charier eye, The Art Of Banksy can’t help but rankle.

Walking through the maze-like gallery space, past test-run screen prints and sculptures and candid photos of the artist-at-work, one may well be astonished (and, perhaps, annoyed) to learn the entire collection is worth an estimated $35 million. The inflation of even the most modest artworks on the open collectors’ market is a well-known concern. But in the case of street art in general, and Banksy in particular, this process feels more acutely insulting. This is a show less about art than about the value of that art and, by extension, the lucky connoisseurs who judiciously hedged bets on the artist’s potential renown. And it is utterly, unashamedly, vulgar.

What, after all, could be a clearer portent for the relentless grind of gentrification than a big-ticket art exhibit that co-opts the angry, anti-authoritarian aesthetic of punk, hardcore, hip-hop, acid house and other defiantly oppositional subcultures? (As if to underscore the point, a few Banksy pieces were recently installed in public space in Yorkville – a neighbourhood that itself is a living archeological history of the gentrifying process.) This is the high school English teacher turning a chair backwards, straddling it, and saying “Y’know, if Shakespeare were alive these days, he wouldn’t be writing plays – he’d be a gangster rapper!” of art exhibits. It is an uncool person’s idea of what cool is.

Viewed generously, this is the sort of popular, digestible fare that makes some people love art. Seen another way: it’s the cheap, exploitative, visually clichéd, thematically just-north-of-vacuous work that embitters others. 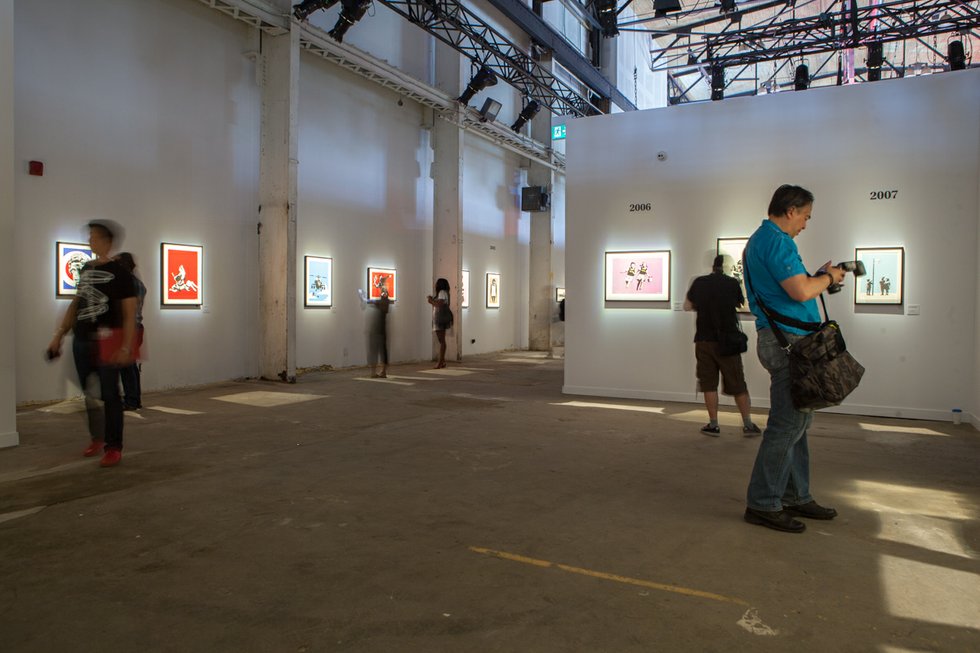 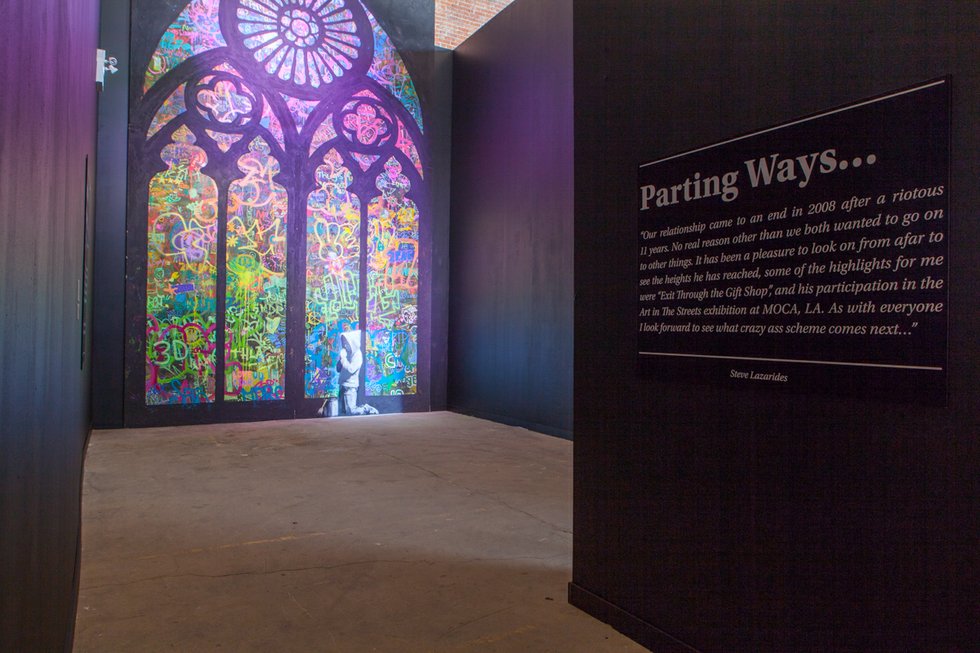 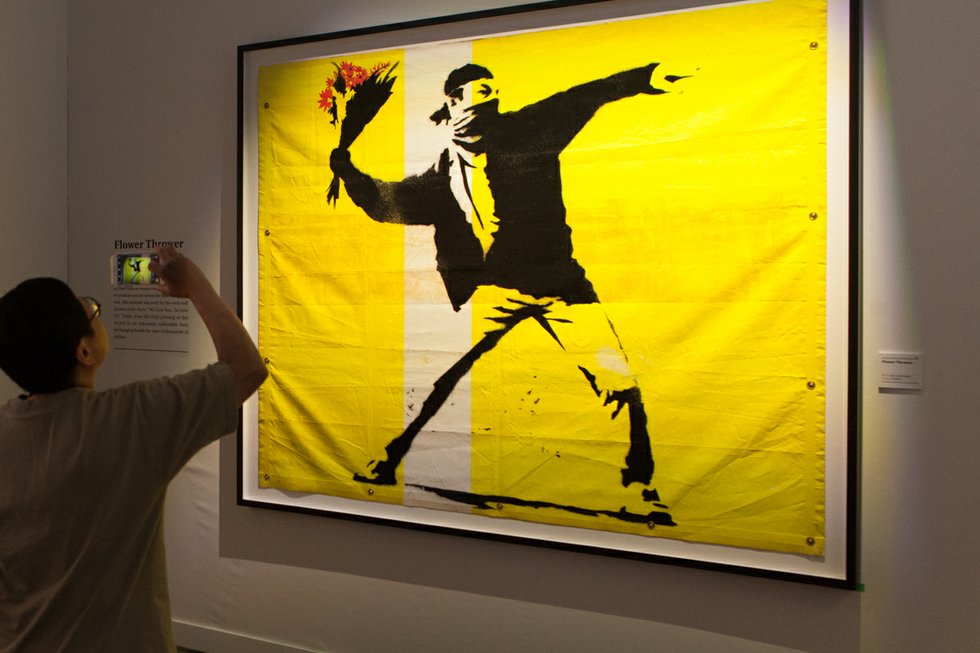 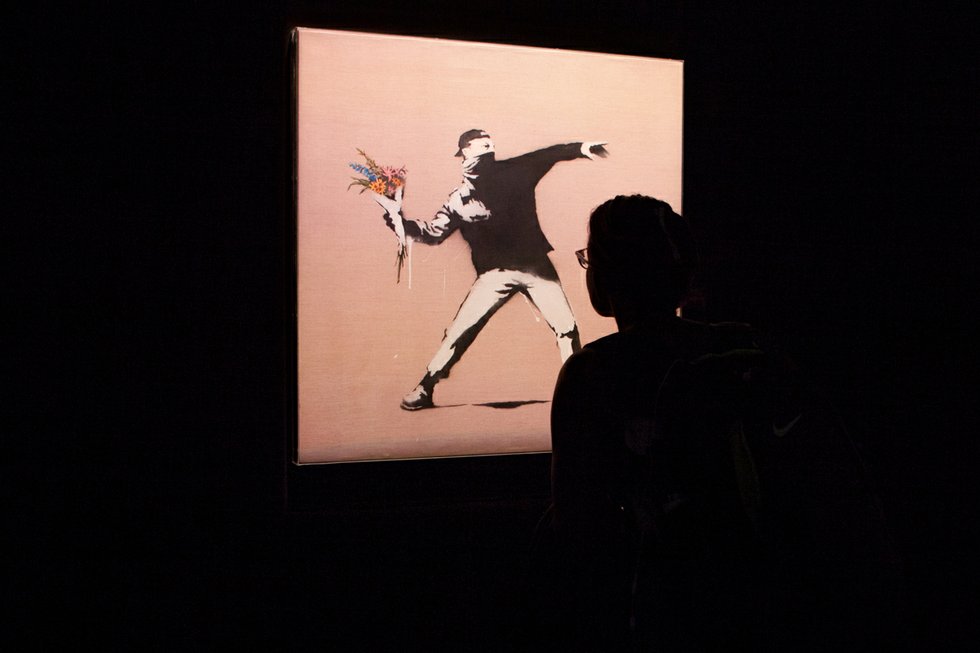 Fifty-nine year-old local artist George Warner is one of the embittered. He plans on protesting the show by hanging his own pieces on a chain-link fence adjacent the exhibition’s entrance.

“Banksy is supposed to be a socialist!” proclaims Warner, over the phone from his studio in Scarborough. “Well, buddy! You know? Give your head a shake!”

To Warner, the Banksy show represents everything rotten about art in Toronto: the lack of concern for local artists in favour of big-name outsiders, the way galleries contribute to pricing out struggling creatives by encouraging development that jacks up rents and the manner in which a “higher echelon of people are trying to capitalize on an artist.” Warner has raised his voice, claiming that he represents “all the starving artists of Toronto.” He has also raised his pen, doodling a rough caricature of himself on TTC ads for the show, and signing it “the illegitimate brother of Banksy.”

“Good!” laughs Lazarides, when I apprise him of Warner’s forthcoming protest during a muggy Tuesday afternoon media preview. “I’ve had it everywhere. I think every show we’ve ever done has had protesters. There’s always somebody who gets upset. It’s the tall poppy syndrome. When people do really well, others want to cut them down.”

Lazarides also seems aware that attracting such protestors vests the show with a certain edge – making it seem as dangerous and controversial as it yearns to be.

The Art Of Banksy thrives on such tensions and cheap paradoxes. It’s punk, but commercial. It’s street art, but not actually – because none of these pieces originally lived in the street they were created with the express purpose of being sold to collectors. It’s a Banksy show (a collection of the artist’s work), but not really (Banksy never okayed the exhibition and, Lazarides says, likely never will). It’s ironic and sly and irreverent and so totally knowing. And anyway, doesn’t Banksy deserve to make a living, too? One can’t help but feel suspicious – and, indeed, wholly disdainful – of an exhibition that needs such excuses to merely justify its existence.

Yet even the best defences of Banksy’s commercial draw – like the commonly recirculated notion that he is essentially profiting off the crassness of the wealthy people who snatch up his screen prints and exhibition pieces – only end up appealing to the logic of capitalism itself. Capitalizing on people who pay millions for your screen prints by selling them art that, as with one famous Banksy print, pointedly calls them “morons” isn’t meaningfully subversive. That such pieces have swollen in value only proves this. The art world’s profit motive and inflamed speculative bubbles aren’t subverted, but rather propositioned. Such desperate “punking” of capitalism is capitalism. And nothing but.

Lenin famously quipped that the capitalists will sell the rope with which they are hung. It pains me to say it, but maybe Lenin was wrong. But Audre Lorde, the Black feminist poet and activist, had it right when she said the master’s tools can never dismantle the master’s house. Capitalism is its own revolutionizing force, constantly incorporating, reifying and selling back (literally, in this case) critiques of itself. In the process, its primacy is only hardened and rarely ever undermined. The capitalists may well sell their own nooses. But then other capitalists make bank selling tickets to the execution. Then take photos. Then sell postcards of the hanging.

In the street – where his work synthesizes with an adolescent, but refreshingly simple, and even elegant, clarity of purpose – Banksy may well provide comfort and commentary. In glossed-up loft gallery spaces on rapidly gentrifying ex-industrial strips, where a pecking order of profiteers sell tickets and t-shirts and other tacky bric-a-brac, the power of that art is utterly debased: weaponized to work against its own spirit.

On the snaking assembly line of irony and irreverence and cheeky contradiction that keeps the Street Art Industrial Complex chugging along, there’s no doubt that The Art Of Banksy curators and underwriters are enjoying the last laugh. Picture them cackling like the kind of caricatured cartoon fat cats you might find spray-painted under a bridge, or on a highway overpass, or on the side of a bank on a busy street, or doodled in pencil in a pimply high schoolers doodle-crowded notebook – where art and the intellect remain, for now at least, free. 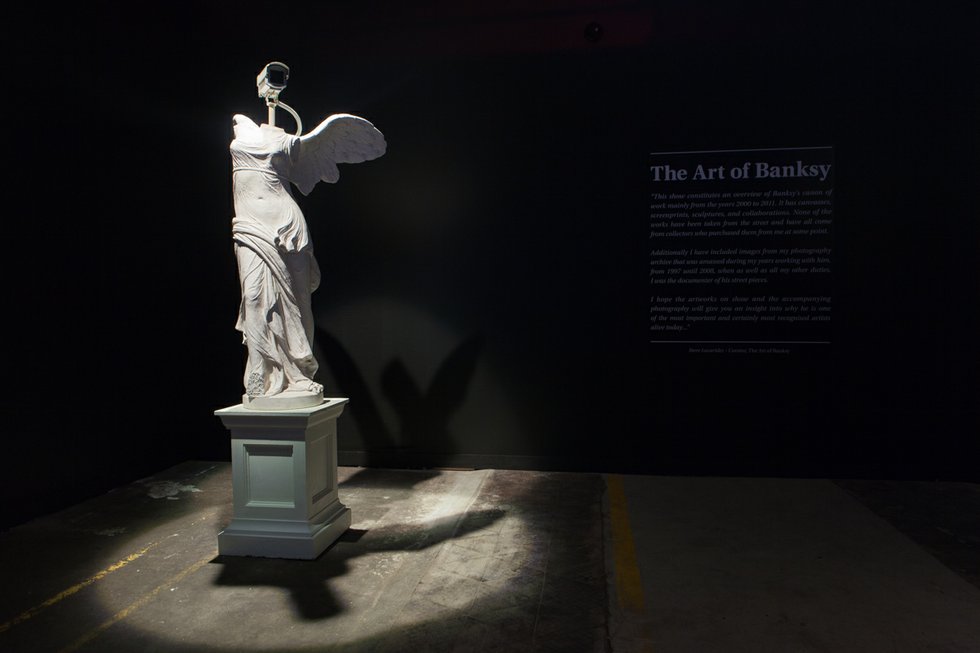