Five things we learned from Arthur Jafa’s AGO talk

The artist and filmmaker was in Toronto to talk Black cinema, Kanye West and the work he considers his "Purple Rain" 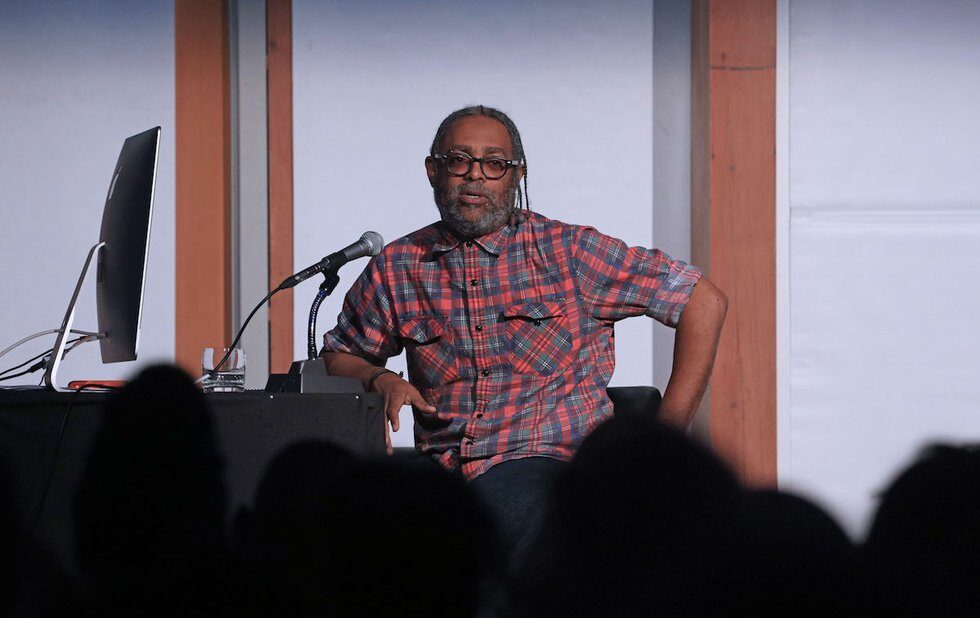 Courtesy of the AGO

Arthur Jafa’s Love Is The Message, The Message Is Death is a searing video portrait of Black America – a collage of news, music, sports and historical footage, people dancing on YouTube, phone videos of police killings, all to a soundtrack of Kanye West’s Ultralight Beam.

The eight-minute work debuted in New York at Harlem gallery Gavin Brown’s Enterprise in November 2016, providing shocked Americans with a wrenching vision of the underlying racism that led to Trump’s election. Since then, he’s had a solo show at London’s Serpentine Gallery and made ArtReview’s 2017 Power 100 list. Many U.S. museums have acquired Love Is The Message, and interviews with him are all over the internet.

Before 2016, the 57-year-old artist had only sporadically exhibited in the art world. Trained as an architect, he’d worked primarily as a cinematographer – for Julie Dash, Spike Lee, John Akomfrah and others. He’s directed documentaries and music videos for Solange (Cranes In The Sky Don’t Touch My Hair) and Jay-Z (4:44) and co-founded TNEG, a film production company promoting Black artists. All the while, he continued working on art video projects.

In a talk May 30 at the AGO, co-presented by Contact Photography Festival, Jafa screened Love Is The Message and other videos and shared his insights into the meanings and strategies of diasporic African culture.

Here are some of the highlights:

BLACK CINEMA CAN SHARE THE POWER, BEAUTY AND ALIENATION OF BLACK MUSIC

Jafa considers music and dance – immaterial expressions that people can carry in their heads – the art forms in which Black people are most fully actualized. His goal is the bring a similar improvisational, fluid Black aesthetic to the comparatively underdeveloped field of Black cinema. Jafa sees his cinematic work as continuing the remixing styles of pioneering DJs like Larry Levan and Robert Hood.

AFRICAN EXPRESSION IS PROFOUNDLY DIFFERENT FROM PRODUCTS OF THE EUROPEAN TRADITION

African art had such a strong impact on early modernism because it comes from a different world view. Much like enslaved Africans themselves, artifacts from the continent displayed in the West were radically alienated from the context in which they found themselves. They were not originally intended as stationary artworks in the Western sense, and their different relation of subject and object created what Jafa called a “blur” that influenced the multiple viewpoints of Cubism and the conceptualism of Duchamp.

THERE’S AN UPSIDE TO UNDERDEVELOPMENT

As an outsider, Jafa has found a freedom to break the rules of moviemaking. The make-do tradition has yielded riches for him, and he doesn’t feel overwhelmed by the quantity of YouTube stuff out there. Hollywood has one way to make movies – “Quiet, action!” – but Fellini, he said, talked through every take. As another example of rule-breaking, he mentioned Kanye West – somewhat hesitantly since the musician’s support for Trump and remarks about slavery are in the news. Jafa had sent him a copy of Love Is The Message but was nervous about not paying for the rights to Ultralight Beam. West liked the video and invited Jafa to sit in on mobile studio sessions in a Berlin hotel, where Jafa was surprised that A$AP Rocky and others were partying while recording went on. West’s sound engineer told him that’s how they always did it.

A NON-BELIEVER CAN BELIEVE

After growing up in various Christian denominations, he said he’s “not a believer, but believes in Black people believing.” Jafa screened part of a work in progress about the Black Church: grainy footage of a preacher’s chant-like sermon and gospel performances by Al Green and Le’Andria Johnson. Despite the absence of staccato editing, this film still felt of a piece with Love Is The Message as a distinctly African-American expression that holds together through the rhythmical cadence of the performers in the clips.

ARTISTS CAN GET TIRED OF TALKING ABOUT THEIR GREATEST WORK

Having seen Love Is The Message for the first time at the talk (it’s not available in its entirety online), I understand why so many people are moved and influenced by it. But Jafa said he is done with it, calling it his Purple Rain. Historically, navigating a segregated art world has taken a toll on Black artists (see Basquiat), an awareness that motivated Jafa’s long absence from the galleries. He’s wary of the massive response to his video, tired of hearing about people’s “eight-minute epiphanies.” Will the more expansive format of the new Black Church work, which runs 99 minutes, deepen the conversation? He’s certainly got our attention now.