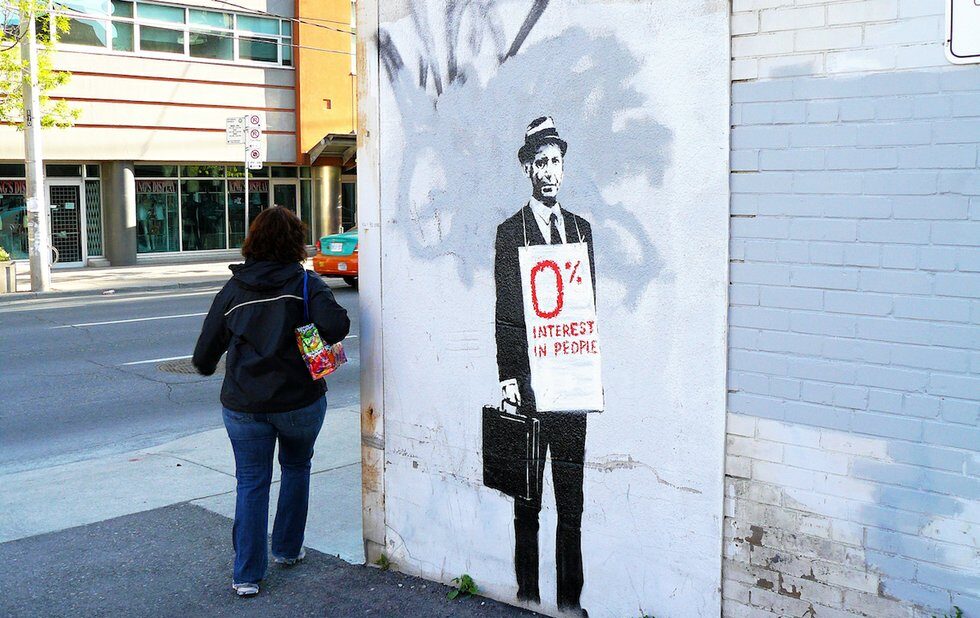 Bansky graffiti popped up around Toronto in 2010.

A massive exhibition devoted to the work of street artist Banksy is coming to Toronto this summer.

The Art Of Banksy, an unauthorized touring show of more than 80 works, will open June 13 in a two-storey “raw space” at 213 Sterling Road.

According to a press release, Toronto “beat out both Athens and Stockholm” to host the show. The exhibition – primarily paintings – has previously traveled to Melbourne, Tel Aviv, Amsterdam and Auckland.

Concert promoter Live Nation and Starvox Exhibits are behind the Banksy show’s Toronto run, which will last four weeks. Advance tickets go on sale via banksyexhibit.com on May 7 to American Express cardholders and to everyone else on May 12 at 10 am. A limited number of tickets will also be available onsite at 213 Sterling on June 13. Tickets are $35.

The English artist, activist and filmmaker, whose identity is a mystery, has become known globally for his whimsical, anti-establishment stencils in public spaces around the world. However, this exhibit apparently does not have his blessing.

Curated by London gallerist and the artist’s former business manager Steve Lazarides, the show is billed as the largest collection of Banksy works. All pieces are privately owned and will be returned to collectors once the show is over.

Lazarides had a falling out with his former client and prior to The Art Of Banksy’s opening in Melbourne in 2016, he told Australian publication Broadsheet the exhibition would likely piss the artist off.

“We’ve been at loggerheads for years,” he said. “He’s not the kind of guy who is ever going to do a retrospective.”

The art featured in the show is valued at $35 million, according to the exhibit’s website. Key works to be displayed include Balloon Girl, Flag Wall and Laugh Now.

Banksy last made a splash in Toronto when he created several pieces in city streets in 2010 as part of a promo tour for the documentary Exit Through The Gift Shop.

Correction: May 7, 2018 An an earlier version of this story incorrectly stated the exhibition will also take place in surrounding venues in the Lower Junction neighbourhood. This version has been updated.