Japanese Canadian artists grapple with the lasting effects of the internment

The Royal Ontario Museum's exhibition Being Japanese Canadian: Reflections On A Broken World sets out to disrupt the colonial narrative 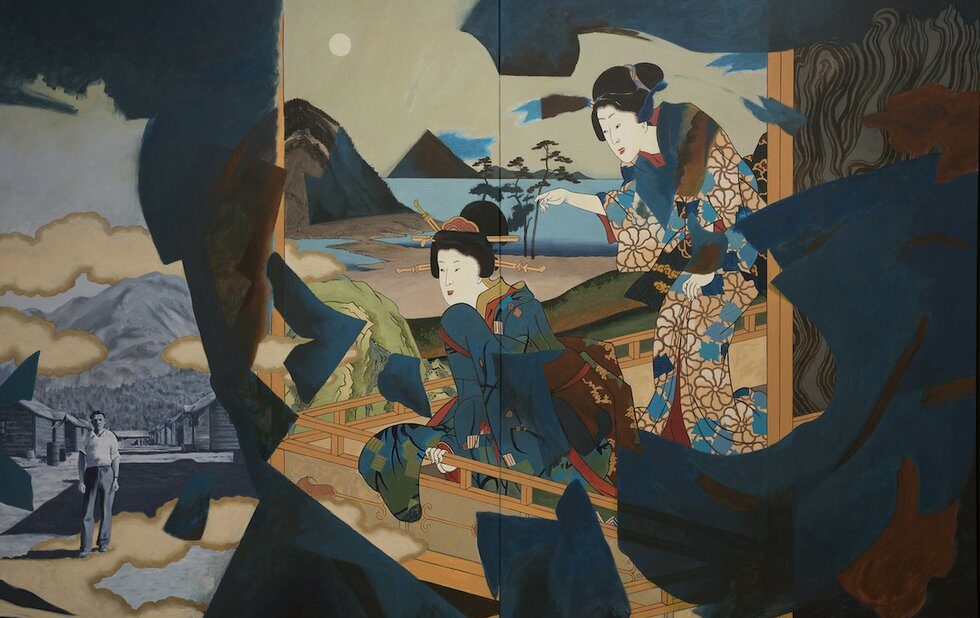 BEING JAPANESE CANADIAN: REFLECTIONS ON A BROKEN WORLD at the Royal Ontario Museum (100 Queens Park). rom.on.ca. To August 5.

What does multi-generational trauma, healing and resilience look like in face of the 1940s internment? For eight contemporary Japanese Canadian artists, it is at once loud and vivid, sombre and quiet, colourful and exuberant.

Thirty years after the Canadian government formally apologized for the exile and dispossession of Japanese Canadians during the Second World War, the ROM’s new exhibit, Being Japanese Canadian: Reflections On A Broken World, presents a multitude of personal perspectives on the lasting effects of the internment.

“Each artist has a significant message about their Japanese-ness from the outside and their sense of Japanese Canadian identity on the other side,” says co-curator Katherine Yamashita. “There’s the dichotomy that all of them explore.”

Fourth-generation Toronto-based artist Emma Nishimura’s piece, An Archive Of Rememory, references the familial silence surrounding her grandparents’ internment. While examining how stories are told through generations, she’s created hundreds of small bundles using the Japanese wrapping technique, furoshiki. Old family photos of her grandparents during and after the internment are photo etched onto handmade paper, and then tied around a mound of sand. Once the paper dries, shrinking and distorting the photos, she punches a hole in the bottom and releases the sand. Although the bundles look like they may conceal rocks, each one is weightless.

“A cornerstone of my work is thinking about memory and how we negotiate these complicated, layered stories,” says Nishimura. “I was thinking about the weight of memory. What do we hold on to? What do we pass on? I was drawn to the furoshiki because it can be very utilitarian, but it can also be used to wrap a gift. There are different ways to package these experiences.” 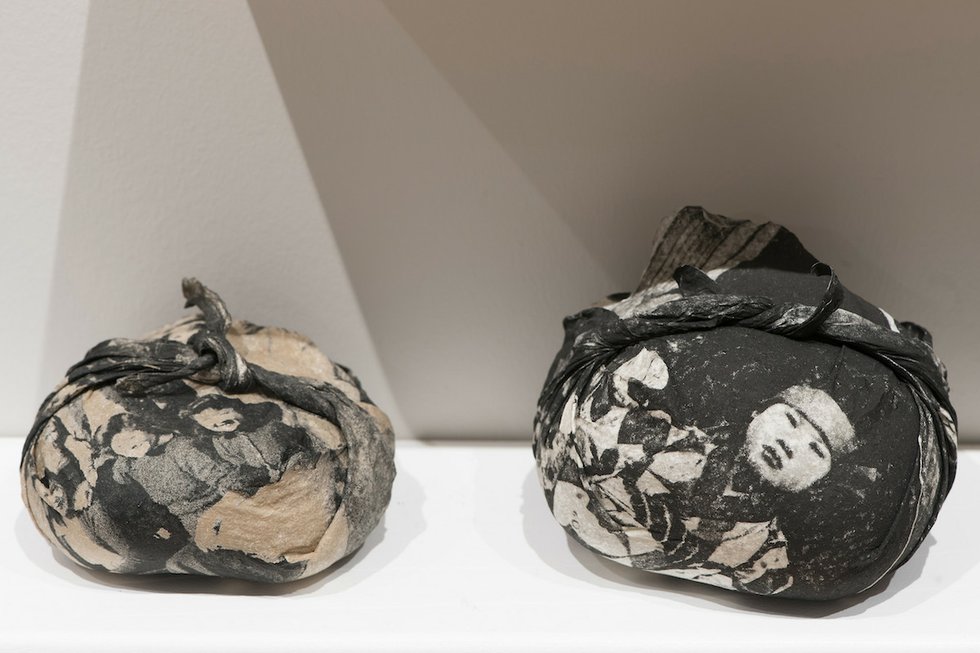 An Archive of Rememory by Emma Nishimura

In 1942, after the attack on Pearl Harbour,  the federal government detained and dispossessed the majority of Japanese Canadians living in British Columbia. This action was executed despite the fact that Canadian military officials and the RCMP felt the Japanese Canadian population did not pose a threat and opposed punitive action against them. In total, around 23,000 men, women and children were forced from their homes and sent to internment camps in interior BC, prisoner of war camps in Ontario or farms in Alberta and Manitoba. During this time, their homes, fishing boats, personal property and businesses were sold by the federal government.

The participating artists all have personal connections to the internment through family and are based across Canada. This geographic diversity was important to the curators because after the internment they were forced to either disperse across the country or move to Japan, even though around 75 per cent were born in Canada or naturalized citizens.

Yamashita, who studied the internment’s effect on women and children and how tragedy is normalized, says it was also critical the exhibition featured artists from various generations to show the diversity of perspectives.

For his piece, Low Tea In ’43, David L. Hayashida, a third-generation ceramic artist from King’s Point, Newfoundland, juxtaposed porcelain teacups with graphic puddles featuring racist slurs his grandfather remembers being called as a kid, like “once a Jap, always a Jap” and “yellow peril,” alongside stereotypical cartoons of Japanese Canadian men with exaggerated slanted eyes and buck teeth. It’s the only piece in the exhibition that overtly references the racism that led to the internment.

Meanwhile, Calgary-based artist Steven Nunoda’s installation, Ghostown, made up of rows of around 150 tarpaper shacks that resemble the cramped quarters, many without running water or electricity, that internees were forced to live in. Isolated in its own room, Nunoda’s work is a quiet, sobering memorial to the camps across interior British Columbia.

“Nunoda had to let the hate and anger fade before he could address the topic. He needed to be more conceptual and have distance from the situation,” says Yamashita. 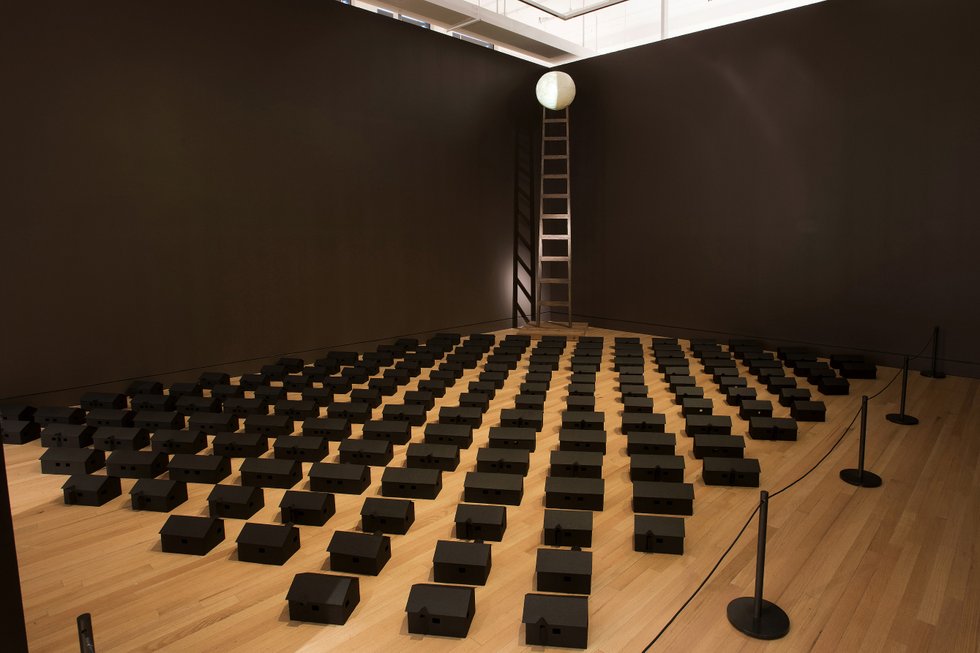 Ghostown and Ladder to the Moon by Steven Nunoda

ROM curator Heather Read originally conceived the exhibition. The curatorial team was then rounded out by Arlene Gehmacher, who oversees the Sigmund Samuel Gallery of Canada, and Yamashita and Bryce Kanbara, who both work together at the Japanese Canadian Cultural Centre gallery.

When you first enter the gallery, you’ll see antique furniture and other artifacts of Canada’s colonial past. Sometimes, the new artworks can disappear into the works in the gallery, like Hayashida’s teacups, which sit behind glass alongside other the gallery’s permanent dishware collection.

Other times, the work looks jarring in its colonial setting, like Ottawa-based artist Norman Takeuchi’s painting, Interior Revisited. Having lived through the internment as a child, Takeuchi’s painting addresses his dual identity and depicts a traditional Japanese woodblock print of two geishas overlooking a black-and-white image of man in an internment camp.

While it was Read’s idea to intersperse the exhibition throughout the Sigmund Samuel Gallery, as opposed to keeping the new works together, Yamashita believes it’s an artistic endeavour that breaks up the colonial narrative.

“[At many museums] there’s a Chinese area, a Japanese area, an Indigenous area. People want everything to be nicely separated into cultural groups, but someone like me doesn’t fit [in those categories]. I belong to a mixed culture,” says Yamashita. “This history and the culture of Japanese Canadians should be present in a gallery about Canadian art.”