Cassils turns the act of looking at trans bodies into performance

While suspended from a harness in a Plexiglas box, the Montreal artist made a big impression – and a mess – at the Gardiner Museum 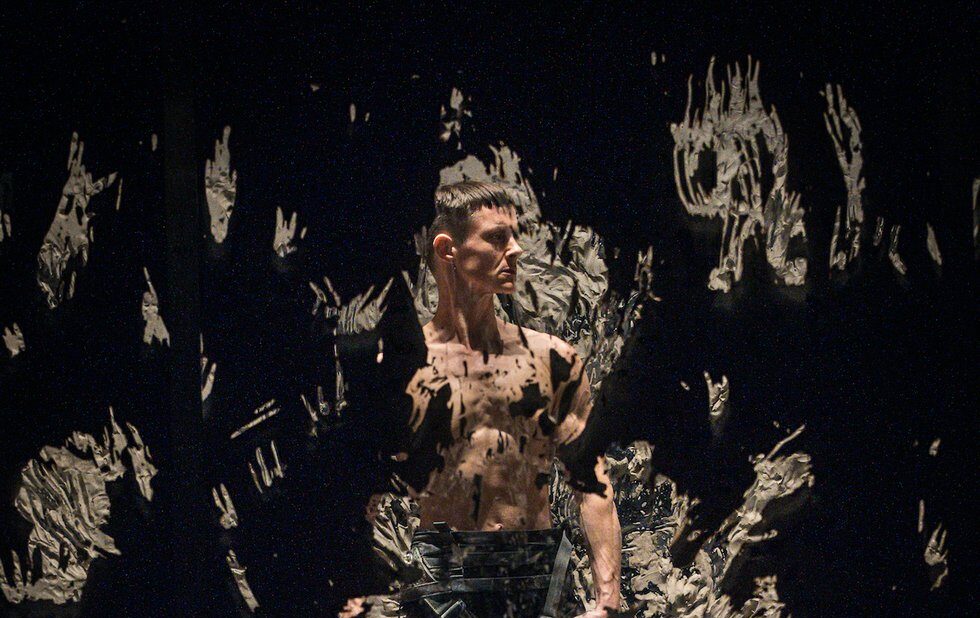 How hard is it to scape raw clay off the walls of a plexiglass box while suspended from a harness? Very hard, judging by artist Cassils performance at the city’s Gardiner Museum of Ceramic Art on February 20. For 90-minutes, Cassils swung themselves against the confines of a 10 x 10 box, moving to different levels within the space with the help of a theatrical rigger.

Visitors to the sold-out performance initially could only hear the sounds – grunts and hard breathing – of Cassils at work. Gradually the artist became visible through the clay-smeared apertures they made with their hands. Visibility was the point, with Cassils being the stand-in for the trans body in public consciousness. During the performance, it was easy to see how the audience becomes a stand-in for society at large.

The performance is part of the exhibition RAW, opening on March 5 at the Gardiner. Unfired clay is the medium for work by artists Magdolene Dykstra, Azza El Siddique and Linda Swanson, along with the performance by Cassils, the remnants of which will be on view in the gallery.

In person, Cassils is an imposing presence. They are of modest height (about 5-foot-6) but packed with muscle. Not surprising for someone who has worked as a stunt person and semi-pro boxer, and who runs a personal training business in Los Angeles. Originally from Montreal, Cassils attended California Institute of the Arts and went on to build a powerhouse art career that includes international recognition, gallery representation in New York City and a Guggenheim Fellowship.

NOW spoke with the artist at the Gardiner Museum the day after their performance.

As a viewer, looking in and hoping to see more as your performance progressed, I felt self conscious about the role I was playing as a voyeur. This faded, however, and I became invested in your efforts to remove the clay. Is that because as we see more of you it becomes easier to identify with you as a whole person?

It’s hard for me to be succinct about the thesis of the work since it’s the first time I performed it. I am making the audience’s act of looking performative, not just being an experience of passive enjoyment. They are going through a process of witnessing my struggle. There is a fascination with the trans identity. In the performance, I am both enacting and denying this dynamic.

I hadn’t before done a work where there was a barrier between me and the audience. At first, this cut my energy. But I see this as an expression of trans isolation. We are in this heightened moment of trans visibility. But without systemic change, it puts the trans body at risk. I am a white, middle-class trans person. I don’t represent the most stigmatized trans people. This is one reason why I trouble visibility.

The body obscured in the performance is a form of resistance to examination. But another element of the work is the way it puts you in control, are you doing this to reverse that dynamic?

No. I don’t feel in control. I am attached to a rope, controlled by someone who I can’t control. When I am upside down, there are straps in my harness that… if they press on my femoral artery for too long, I will die. I don’t have a lot of control over my velocity when I am swinging. I also have the responsibility to make a connection with the audience. The burden of representation is on me – the responsibility to make the work, and to connect with my audience.

The performance evokes a number of artists. I really thought about certain works by Yoko Ono, and especially Cy Twombly.

When I’m pulling the clay off the wall, I’m throwing it on the ground to create a platform I can stand on. When it’s high enough, the performance ends. Most of my work is about the indexical. Clay picks up every gesture. In the process of making the platform beneath me, I’m throwing the clay on the ground, and each time you can see the negative space of my fist. Doing this in a ceramics museum, it’s about self making and embodiment. It’s also about making a mess. 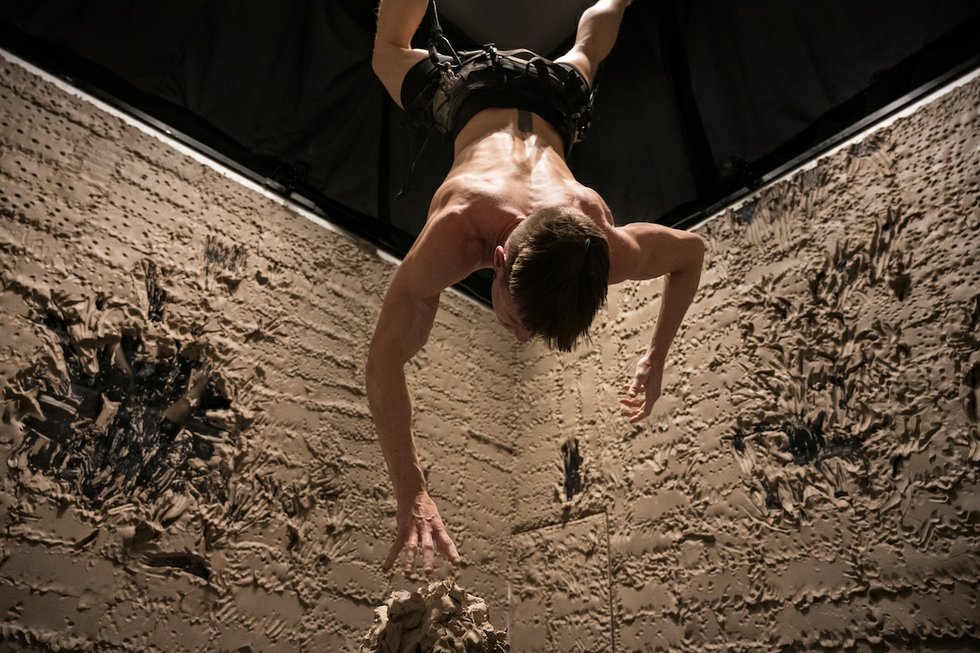 When Cassils pulled enough clay off the walls to create a platform to stand on, the performance ended.

In one of your works, Cuts: A Traditional Sculpture, you gained 23 pounds of muscle in 23 weeks. I consulted a fairly technical article on bodybuilding.com about muscle gain. Turns out, gaining one pound of muscle per week is pretty much the optimum a bodybuilder can hope for. Sustained over 23 weeks, it’s an incredible feat. Did you do this bodybuilding to make yourself into an object?

It’s not bodybuilding. I was responding to a 1972 work by Eleanor Antin, Carving: A Traditional Sculpture, in which she crash diets and documents the effect on her body. She documents performing an act of starvation. In 2011, when I did this work, there was very little awareness of trans identity. I identify as trans-masculine, not non-binary. I don’t believe I need to have a double mastectomy to be trans. I am an athlete and have my own personal training business. I think of my body as both an instrument and an image. To do this performance, I had to lay off the weight training and focus on my core flexibility. This is part of the vocabulary I am working with.

Looking at my snapshots of the performance, I was surprised to see how painterly they are. This is a thread that runs through all your work: becoming image. Formally, the work is very strong, very legible. Since all of it revolves around your body, are you making art as a pretext for circulating images of a powerful trans body?

Yes. I was trained as a painter. My work is always a material exploration a tremendous goal of the work is formal investigation. I use a formal language that isn’t didactic though it is still complicated, it can’t just be a clean read. Right now, I am working on something about for-profit immigration detention centres. That needs to be didactic.