For nearly 60 years, the Coffin Factory has provided affordable live-work studios for artists. Now slated to become a condo, the tenants are getting evicted March 31 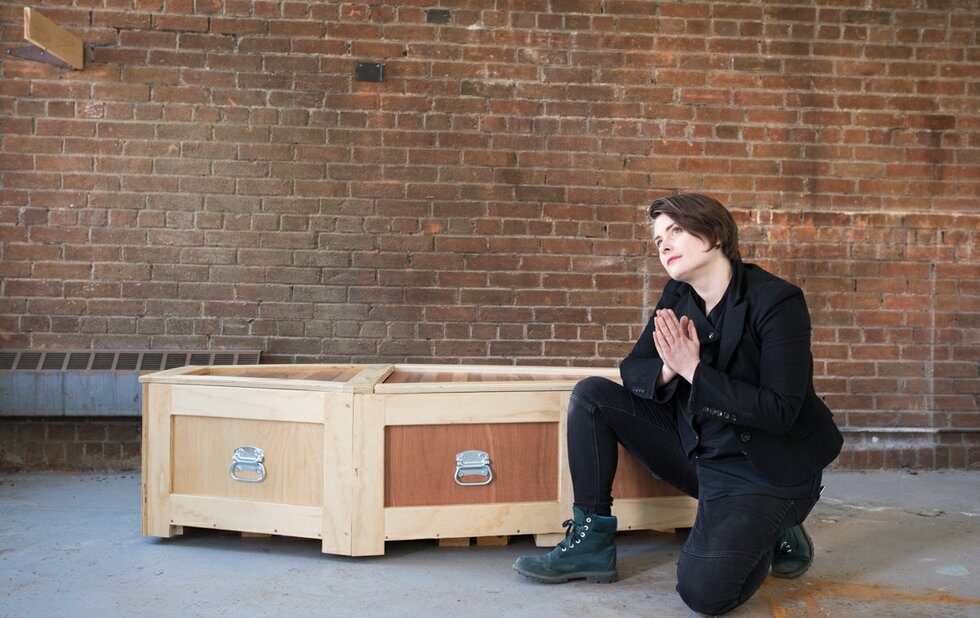 Vanessa B. Rieger, who has lived in the Coffin Factory for nearly seven years, mourns the loss of affordable housing.

The Coffin Factory – as it’s colloquially named after its previous tenant, the National Casket Company – is sliced into artist live-work studios for painters, sculptors, musicians, writers, photographers, carpenters, woodworkers, animators and actors. It has housed indie theatre companies and the gritty cinema Trash Palace run by Stacey Case, the rehearsal space for the all women, WWE-esque Pillow Fight League and a sex dungeon. It’s held art openings, raves and concerts. Some previous tenants like to joke that it was the location for half of the movies filmed in Toronto masquerading as New York City.

“We had a nickname for it,” says Jeremy Edwardes, an Oscar-winning film producer and musician who has lived in the building since 1993. “We called it ‘A Zone of Its Own.’ There’s nothing quite like it.”

Built between 1883 and 1887, 89-109 Niagara Street was originally a factory producing wooden doors, carriages and pianos. In the early 1900s, the National Casket Company took over the sprawling structure and began manufacturing coffins until 1973. Three years later, the artists moved in.

Its next iteration follows the trajectory of so many other local warehouses. It’ll become the site of a new development featuring 12- and 14-storey condos that will tower behind the old protected heritage buildings. The tenants will be evicted on March 31.

“It’s like a bottle of perfume. The bottle is broken now, but the fragrances of all these memories are still so strong,” says Edwardes.

In the Coffin Factory’s final weeks, tenants have organized farewell events, including a community potluck and a funeral on March 23, which Edwardes helped organize with other long-time residents, including artist Vanessa B. Rieger.

At the funeral, around 75 tenants past and present, many wearing black, gathered to share memories of the building. A casket constructed by Rieger, which will double as a time capsule, was carried around the building in a funeral procession and is now displayed in a gallery space inside.

“Everyone is grieving. I thought what better way to deal with these feelings of fear and frustration than to do something positive, uplifting and hopefully unite people to work toward healing,” says Rieger. 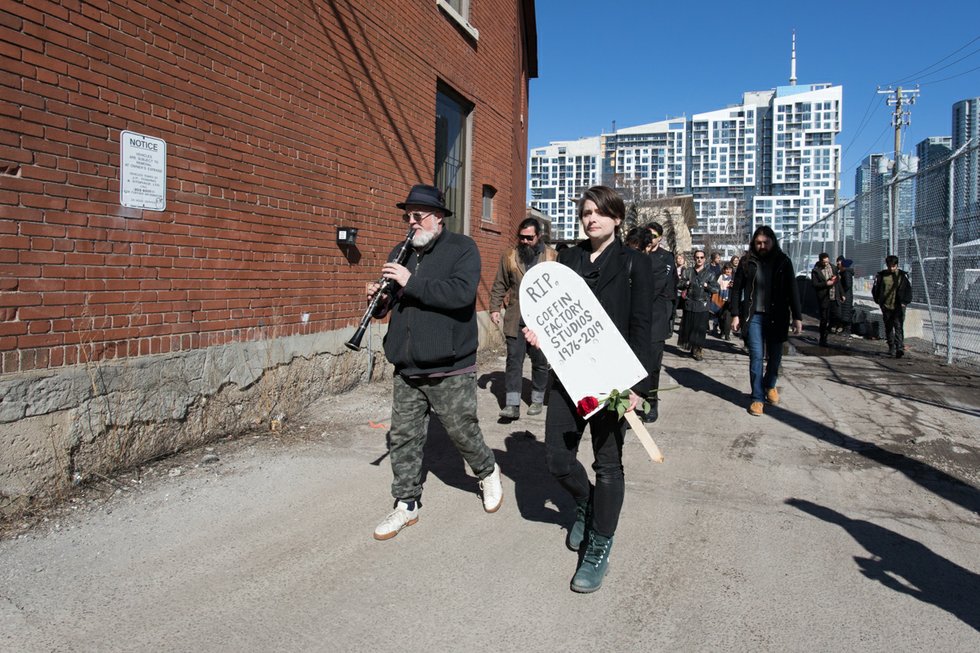 Tenants Jeremy Edwardes and Vanessa B. Rieger lead a funeral procession around the Coffin Factory

She moved in nearly seven years ago into a massive unit that contained five bedrooms, each with its own private studio, kitchen, dining area and living room. The rent for the entire unit, which was around 3,200 square feet, was $3,000 inclusive, a steal in Toronto.

Living and working in the same space, Rieger became more disciplined as an artist and was constantly inspired by her roommates, including fellow artists, writers and musicians like Katie Monks, who threw a concert with her band, Dilly Dally, in their unit for a recent music video.

Another one of Rieger’s former roommates is mural artist Tisha Myles, who also was a member of the Pillow Fight League, which rehearsed and filmed promo videos inside the Coffin Factory.

“Everyone I know who is an artist, designer, architect or filmmaker has been inside the Coffin Factory,” says Myles over the phone from her Parkdale apartment. “It was always conjuring something that permeated the arts community.”

Over the last few years, artists living and working in west-end loft spaces – along Sterling Road, at Dupont and Ossington, on Dufferin north of Queen – have been evicted to make way for condo developments. After leaving her studio at the Coffin Factory, Myles was able to find a new one in a factory in the Stock Yards.

“I’ve now been condo-evicted three times. First from my wood shop on Carlaw, then from my studio on Queen and Dufferin, and now here,” says Rieger, who is moving to Prince Edward County, where she already has a wood shop and studio.

It’s a dilemma many artists are now reckoning with as Toronto becomes more unaffordable: do you stay in a city where you’re surrounded by a supportive community and opportunities, but struggle to pay rent? Or do you move somewhere more isolated but affordable, where you have more freedom to focus on your work?

“I’m at this position in my life where I’ve decided I’d rather keep my practice and have a studio space than pay the high rents in Toronto,” says Rieger. 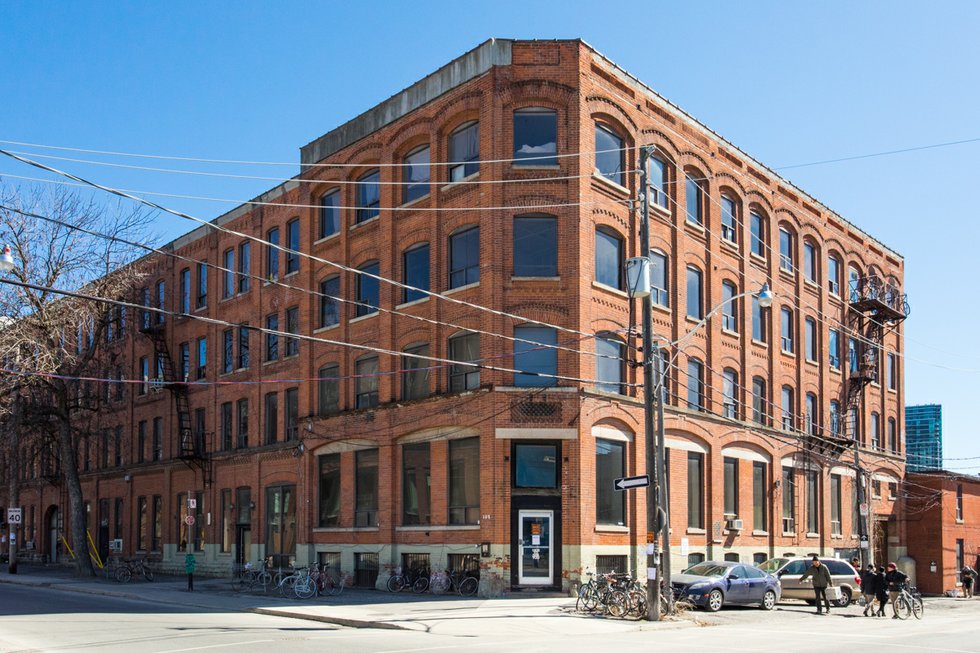 The Coffin Factory was built between 1883 and 1887 and has provided live-work studios for nearly 60 years.

Edwardes, 65, moved into his 1,200-square-foot unit 25 years ago after coming to Toronto from Montreal with a Fringe theatre troupe. He remembers first seeing the unit when it was a render farm for Steve “Spaz” Williams, a special effects artist who created the digital T-Rex for Jurassic Park.

These days, Edwardes’s open-concept unit is spacious but well-worn, with a kitchen and dining area, a small guest bedroom, a 100-year-old piano and a performance space to throw intimate concerts, like the one he played with his folk band last week. His bed, accessible by a steep ladder, is perched atop a loft he built in a claustrophobic, closet-like space and leads to the rooftop.

“I used to watch the SkyDome open and close from here. I had an entire view of the CN Tower,” says Edwardes, standing on the rooftop. Clusters of condos now block the skyline. “It’s like in Star Wars when the machines come at you. ‘Well, I think we’re going to be consumed.’”

From this spot, Edwardes has watched as the condofication of Toronto has altered the city’s cultural landscape. He contrasts it to his hometown of Montreal, a place he says fosters its arts community by preserving their artistic spaces. If you strip them all away, the community will suffer.

“It’s very easy for artists, especially sensitive ones, to become isolated. Spaces like the Coffin Factory are wombs for creativity and connection,” he continues.

Despite his many fond memories of the place, he doesn’t let his nostalgia cloud the realities of living in the building. There were times when it housed several grow-ops, there was a shooting, and it’s in desperate need of repairs.

According to Edwardes, some long-term tenants won’t be moving out on March 31 because the new owners, Aspen Ridge Homes, did not serve proper eviction notices. “The new owners are saying they’re changing the locks no matter what on April 1 and if you don’t get out or make a fuss, you won’t have access to the affordable studio space [in the new development]” says Edwardes. Since last fall, tenants have been moving out.

After the Coffin Factory, Edwardes is leaving the city. He’s producing an APTN show about Indigenous musicians and helping to organize a festival in South America next year. He plans to live out of an RV.

And so the death of the Toronto loft space continues. Live-work studio spaces are becoming more rare, rents continue to increase and DIY venues continue to shutter.

Although Myles laments these closures, she remains hopeful for her hometown. As she says, the creative spirit is always fighting.

“As we dissolve these kinds of DIY spaces, it causes a cultural migration and I don’t know what the downtown core is going to look like in 10 years,” says Myles. “I hope one day all the condos will become dilapidated and we can turn them into art spaces. But they won’t have the same mystique and timeless beauty like this place did.”