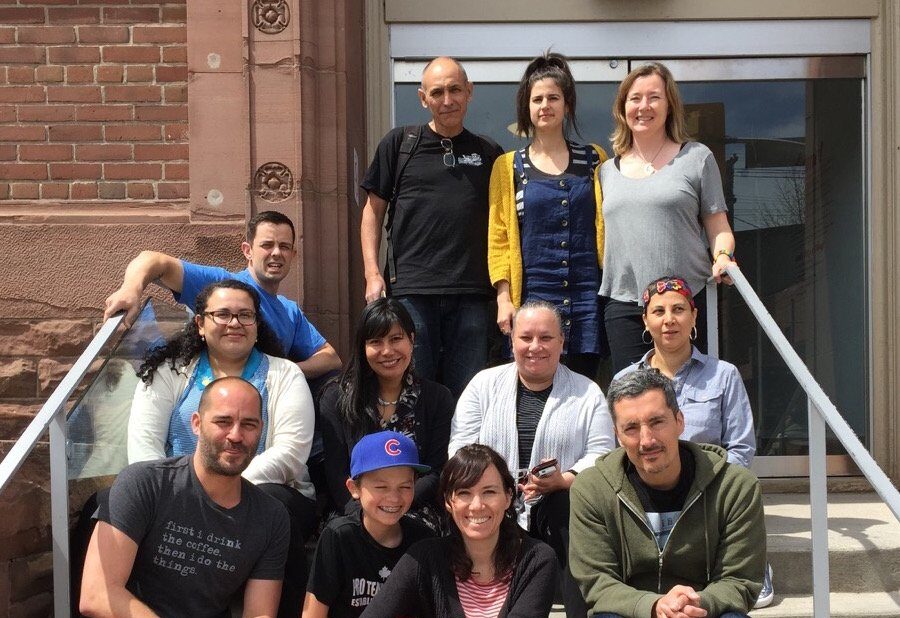 Students in an Ontario-based Cree language program that was supported by the Indigenous Culture Fund.

The Ontario government has slashed the Ontario Arts Council (OAC)’s Indigenous Culture Fund (ICF) nearly in half – from $5 million to $2.75 million.

The move, which the province has characterized as “a review,” comes five months after Premier Doug Ford’s Progressive Conservative government cancelled sessions to update the Ontario school curriculum with Indigenous content. Both the curriculum update and the ICF were responses to the Truth and Reconciliation Commission of Canada (TRC).

Four Indigenous women who administer the ICF have also been laid off, effectively suspending activity within the program.

“Combined, this represents a rather gross attack on reconciliation,” says Indigenous Screen Office director Jesse Wente, “and on Indigenous communities and their ability to preserve and continue their traditional practices.”

The office of Ontario’s Tourism, Culture and Sports minister Michael Tibollo did not return requests for comment.

However, in a statement obtained by NOW, a ministry spokesperson confirmed the fund was cut back to $2.75 million for the 2018-2019 year in order “to ensure taxpayer dollars are being used responsibly and efficiently to maximize the impact of Indigenous culture support.”

Set up by the former Liberal government in 2017, the ICF was developed by Kerry Swanson, who at the time served as the OAC’s associate director of granting.

Unlike most fine arts grants, the ICF supports First Nations, Inuit and Métis cultural programs, activities and events intended to preserve heritage, such as bead making and language learning.

Swanson, along with OAC’s former engagement developer Darlene Naponse (also the filmmaker behind Falls Around Her), conducted in-depth consultations with communities across Ontario, as well as with the Chiefs of Ontario, the Métis Nation of Ontario and the Ontario Federation of Indigenous Friendship Centres.

“We approached this as a co-design process,” says Swanson. “We were actively engaging with communities to design the fund in the way that would meet their cultural priorities, and with language, guidelines and processes that would resonate with them. The priorities they identified were related to way of life activities that were intrinsic to cultural identity and expression, with a focus on sharing traditional knowledge, teachings about the land and language.”

The program, which was active for only a year and took more than a year to develop, was faced with demand that went far beyond the original $5 million budget. The Ford government’s suggestion that it needs to be reviewed is like uprooting a plant before it has a chance to grow.

“Given that history, cultural revitalization is particularly resonant. The ICF is a tiny little fund but what its endeavouring to do is hugely ambitious, supporting exactly the types of activities that Canadian historical policies were trying to eradicate.”

Goulet received funding from the ICF to organize a Cree language immersion course for a week in Ontario led by a teacher from the prairies.

“I really felt so hopeful and optimistic that we were in a new era,” says Goulet. “This tide of horrendous history was going to be undone. These small community initiatives, which are undertaken by collectives like ours, are just doing the work to build ourselves up one-by-one. For us, that meant starting to learn the language again.”

Goulet had planned to take the sessions a step further, organizing classes to explore concepts and history embedded within the Cree language, and the narrative structures that developed from it. She refers to how the variations on Cree, between historical texts and oral histories, can track the people’s migration. As an example, the Cree word for “north wind” is defined by a relation to Glaciers.

“It reflects a time when people co-existed with glaciers, like 10,000 years ago,” says Goulet.

Anishinaabekwe artist and writer Aylan Couchie is starting a petition to be read in Ontario’s legislature and refuses to go down without a fight. She too was hoping to tap into the ICF to fund a program she developed with Ian Campeau, aka DJ NDN from A Tribe Called Red.

“We hoped to archive elder and knowledge keeper stories from within our community,” says Couchie. “Stories about changes that they’ve seen in the community and the land, but also their stories growing up. We hoped to create community-engaged events where people can come and listen to these stories being recorded, so that youth and other community members can actually hear these oral histories in the way that they’re supposed to be delivered.”

Couchie and Campeau planned to create a repository for these stories that future artists could use as a resource when creating their own stories.

The cut to the ICF budget means they will have to scale back and search for alternative financing sources because they are reluctant to dip into a now-limited pool.

Couchie is particularly disappointed in Ontario finance minister Victor Fedeli. She’s from Nipissing First Nation, which is within the riding he serves as MPP. Prior to that, he was mayor in neighbouring North Bay.

“He comes to community events on the reserve,” says Couchie. “He’s been doing that for years. It’s frustrating to have him be within the community, see the progress and then decide to cut something that would further that progress.”

Requests for comment from Fedeli’s office were not returned.

“They’re just going after the most vulnerable people in our province,” says Goulet, observing the ICF cut is part of a wider Ford government cuts, such as the total funding cut to the Ontario College of Midwives. “First you’re going to attack trans rights. And then you’re gonna cut the Indigenous Culture Fund. And then the Ontario midwives. Those are babies! Way to get tough on the babies, Ford!”

Swanson warns that all Ontarians need to pay attention to Ford cuts that effect Indigenous communities.

“Not all of this funding was as public-facing as ICF was,” says Swanson, noting that the Indigenous curriculum, language revitalization and the ICF are all part of the province’s Our Journey Together strategy that calls on all ministries to respond to TRC.

Culture camps for indigenous youth supported through the Ministry of Tourism, Culture and Sport are part of this strategy and Swanson worries that program could be vulnerable to incremental dismantling.

“This is a systemic approach to deny Indigenous rights and undermine any progress towards reconciliation,” she adds.

“This is a loss not just for Indigenous communities,” adds Wente. “Ontario is a Wyandot word. This province was created thanks to numerous treaties made with First Nation’s people. We are the most populous province for Indigenous people in the country. Cutting these funds doesn’t just effect those communities. It effects all of Ontario and our understanding and relationship between these things. It presents a loss not just for our communities but for the larger community as well.”