Five gorgeous paintings that bring out Torontos romantic side 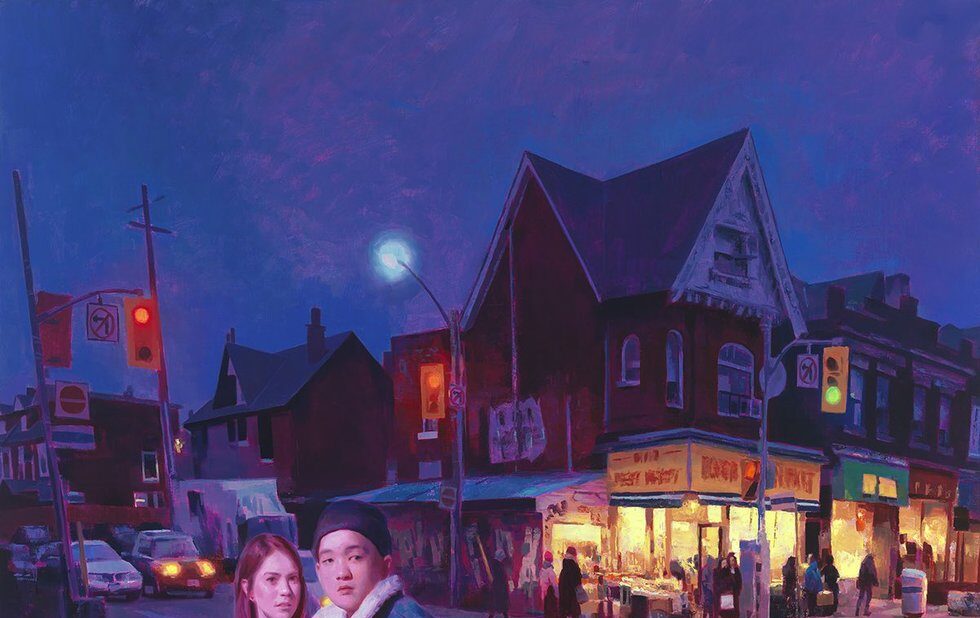 When Toronto skies are ablaze in soft pinky-purple-orange hues at sunset, one place reliably has the best view: your Instagram feed.

The result gives seemingly mundane scenes in Chinatown, Koreatown and the western suburbs a wistful grandeur. Its the kind of picturesque portrayal Toronto hasnt always enjoyed in art, but has become more common in music videos, on social media and occasionally in cinema (Take This Waltz, The F Word, Last Night).

NOW spoke with Morimoto about his process, the places featured in Light Passage and why Toronto cityscapes are ripe for a romantic treatment.

The 24-hour restaurant Pho Pasteur was a regular post-last call destination for Morimoto and his friends as students. The painting is heavily nostlagic, and typical of Light Passages focus on locations Morimoto frequented during his time living downtown as an undergrad.

I didnt really look at scenes, streets or lights back then, he explains. But Ive found a new perspective that I didnt really appreciate.

Meeting Place reminds us to stop, look and appreciate the things you might miss as you whiz by on your daily routine. In this case, we see a location that many only visit drunkenly at night as it looks when illuminated in the sober light of day.

Im very conscious of that act of looking, he says. When I began this series I started looking at a lot of things and finding them visually fascinating. I started noticing correlations between classical scenes and classical landscapes.

One of the artists that sprung to Morimoto’s mind as he wandered around the city was Edward Hopper, the American realist painter who used often light to bring out the underlying drama and isolation in banal scenes.

Arrival, which shows one of the new, Bombardier-built streetcars stopped on Spadina, directly references Hoppers classic 1942 painting Nighthawks. It depicts late-night patrons sitting in the rounded window of a diner lit by a warm artificial light that spills on to an empty sidewalk.

I saw that streetcar open when I was across the street and thought that was the perfect comparison to that painting, he says. What I like visually is the light from the open door against the really, really dark streetcar.

Morimoto’s painting is less desolate and universal than Hopper’s meditation on wartime alienation, but the specific sight of red-and-white TTC vehicle is likely to inspire anxiety among public transit riders that are languishing as city councillors fight their endless war on the car.

The purple-accented blue sky above Bloor Wests Koreatown neighbourhood is perhaps too subtle for an Instagram sunset photo roundup on BlogTO, but Fruit Market instantly evokes the blue hour nonetheless.

There are definitely interesting colours in Toronto that I havent really seen in other parts of the world, he says. Im from Japan and the skies there are very different. Its a lot yellower. The sunsets seem more bright orange whereas Toronto feels a lot pinker. Maybe its the pollution?

Similar to Arrival, Fruit Market is less interested in the foregrounded action than how the interplay between colours, natural and artificial light and shadows create a narrative. At dusk, the fruit market house in a converted Victorian becomes a glowing hub of activity but perhaps not for the two student types whose attention is drawn to something outside the frame in the opposite direction.

As in past work, Morimoto uses photo documentation as source material for Light Passage. Over the years he started shooting landscapes, but initially did not consider Toronto romantic enough. Its quite decrepit, he says. At least thats how I felt about the city until I started really looking at its visual elements.

Instead, he had planned on painting Japanese cityscapes but during a trip back home he had trouble relating to the orderly and immaculately maintained buildings.

Ive been in Canada for the last 12 years so I felt so foreign to the space and environment [in Japan], he recalls. I couldnt emotionally engage myself. Everything just felt very polished. I dont think my paintings are about geometrical or architectural perfection. Whereas Toronto is always very raw, in a way. Its just there: new things are built on top of old things and some things are left as is. I found it much more interesting to paint.

Viewpoint captures this tension. It looks northeast over the city from a rooftop and shows gleaming modern skyscrapers overlooking older buildings at Queen and Spadina.

Though hes looking more intently at landscapes lately, Morimotos friends continue to feature prominently in his work. The reason for that is practical.

A comfort level with the figures is important for me, he says. Ive had people that I dont know in the studio as well and similar to architecture thats too perfect it can feel like people are posing too deliberately. That can happen when I dont have a closeness with somebody.

Night Owls brings together many elements of the previous four paintings: nostalgia for Chinatown (its set a few blocks away from Meeting Place, in front of another go-to Chinatown pho spot, Pho Hung) an old, jumbled cityscape and contrasting light sources that add tension (the person in front is lit from below and the two in the background from above).

Im not trying to create a specific narrative, but by having figures I can let myself work out the narrative and allow the audience to engage as well.