How indie art spaces are surviving gentrification in Toronto

From garages and shipping containers to members' clubs, art galleries are finding creative ways to carve out space in the city 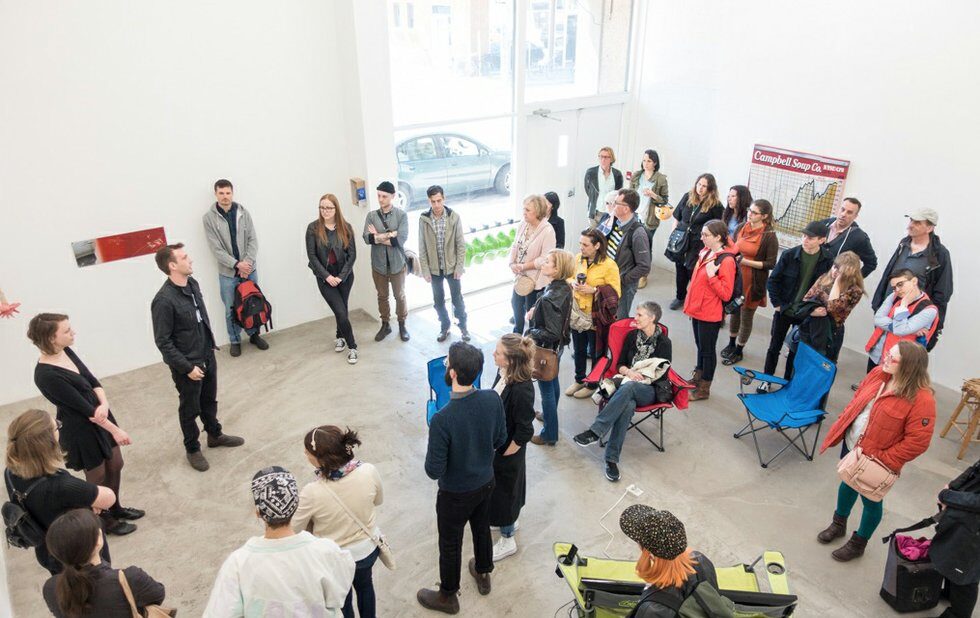 Artists see possibilities that mere mortals tend to overlook. This is especially true when it comes to finding the space needed for making and showing their work. In today’s real estate market, affordable rental properties are increasingly scarce. As densification increases in Toronto’s urban areas, gentrification now obeys its own logic, one in which everything looks like a condo tower just waiting to be retrofitted.

Long known as first adapters of derelict sites, artists seem less central to the gentrification process than before. Instead, they are devising new ways to carve out the space they need. What follows is a list of tactics used by artists working independently in the city – a place that of course belongs as much as much to them as it does to fat cat developers.

The Akin collective now boasts a 10-year track record of creating affordable space for artists. This includes a new partnership with the about-to -launch Museum of Contemporary Art (MOCA) that will provide studios for over 30 art professionals. The entire Akin enterprise, which includes a range of art-based programs, is funded through studio rentals – currently, about 30,000 square feet in seven locations across the city. The collective innovated a model where they rent buildings or parts of buildings on an interim basis, moving studios to new locations, as the locations they use get developed. They are having a party on September 6 to celebrate their 10-year anniversary and to raise funds to support their move into MOCA.

A shipping container located in a parking lot at Dupont and Symington, Bunker 2 is collectively run and funded on a project basis. Aside from the initial investment in the container itself, costs are kept low. As co-founder and curator Veronika Ivanova notes, this allows for “more experimentation and spontaneity in programming.”

Europe has an extensive network of Kunstvereins – art clubs, essentially – and membership comes with a modest annual fee. Toronto’s version has partners in New York City, Amsterdam and Milan. KVT’s director, the artist Kara Hamilton, reports that while they initially offered memberships, the model didn’t really fly here. Calling itself a nomadic platform, KVT today raises funds as needed, while partnering with various spaces in the city on a project basis. As important are the publications they make to accompany exhibitions.

Launched this summer, Ma Ma is run by two independent curators, Magdalyn Asimakis and Heather Rigg. Their initial slate of programming is happening in a space in the Junction where they plan to be until November. After that they will look for a new location, also temporary. Upcoming on September 21  at their current location on 300 Campbell is a project by the highly regarded First Nations artist Tanya Lukin Linklater. Entirely financed through crowdfunding, Ma Ma is happy to accept donations at gofundme.com/ma-ma.

These two separate galleries share a basement space on Wade Ave. Both commercial ventures, each is sustained by selling artworks. Run by artist Aryen Hoekstra and designer Kevin Boothe respectively, the galleries present separate programs on alternate months. They decided on a time-share model to lower costs and enable more freedom in programming. Additionally, Towards has an online publishing platform and Franz Kaka is participating at a number of art fairs, including Art Toronto in October.

Located in the alley behind 13 Mansfield Ave near College Street, this garage space is financed by its owners and through donations and art sales. The programming team shows work primarily by new and emerging artists, and foster the ad hoc communities created by the art shows. Through demand, the team has also found that private rentals of the space provide a good, if inconsistent, source of revenue.

An art collector, curator and entrepreneur, Rafi Ghanaghounian has made art projects in Toronto, New York, Havana, and elsewhere. HOME AWAY HOME, focusing on the newcomer stories of Kensington Market and featuring ten artists, is his most recent venture. Launching September 6 (through September 10), the exhibition can be seen in Kensington’s parks, streets, laneways and art galleries. The show will enhance the Market’s already eclectic atmosphere with public programs, including tours, concerts and family activities.