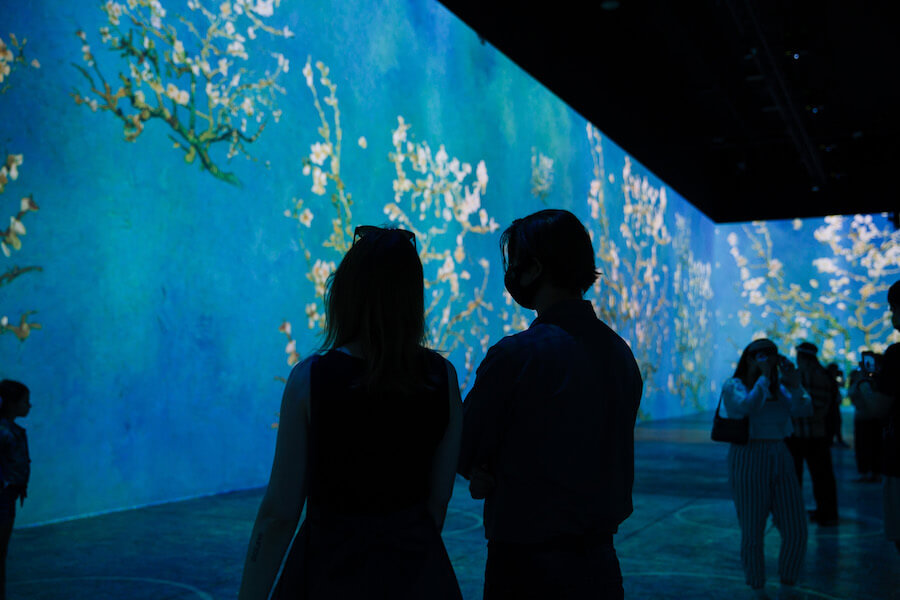 With most cultural events cancelled due to coronavirus, the only game in town for high-concept mass entertainment in Toronto this summer is both random and appropriate.

Immersive Van Gogh is a digital projection show that takes the paintings of Dutch impressionist master Vincent van Gogh and turns them into psychedelic animation.

Artistic director Massimiliano Siccardi and composer Luca Longobardi staged a different version of the show at the Atelier de Lumieres in Paris late last year. That’s where producers Corey Ross and Svetlana Dvoretsky caught it and decided it would be perfect to launch the experiential event space, Lighthouse Immersive.

Immersive Van Gogh will run until the public stops buying tickets or developer Pinnacle International turns the site into a 95-storey luxury condo (whatever comes first).

The show brings to the global trend of 360-degree digital video projections transforming classic works by European painters to Toronto. Such shows have reconfigured works by Michelangelo, Da Vinci and Van Gogh – who is so popular he was the subject of a different “immersive” show in Montreal last year.

But why van Gogh? Why now? And how is this exhibition even still happening when large public gatherings in Toronto are banned for the foreseeable future?

Immersive Van Gogh takes the work of a painter synonymous with isolation, mental illness and depression at a time of stress and crisis into the realm of Instagrammable entertainment. If painting was catharsis for an artist in self-isolation, perhaps a selfie could be yours.

And, it just so happens, the experiential art format is conducive to physical distancing – and a drive-in.

Immersive Van Gogh will run as long as people buy tickets – or until the Toronto Star printing plant building becomes a condo.

When coronavirus lockdown measures came into effect, Immersive van Gogh was one of the few summer events not to cancel. As the pandemic progressed and Ontario began announcing reopening plans, producers were quick to adapt to the evolving political response to the emergency.

First, they announced the show would pivot to a drive-in format, cheekily dubbed Gogh By Car.

“We had thousands of ticket buyers and they weren’t all clamoring to get their money back,” explains Ross. “But we kept hitting walls.”

Then, most of Ontario entered stage 2 in late June – but not Toronto.

Museums and galleries would also be allowed to reopen in stage 2. So, the producers had to react again. They bisected the show into two rooms so that drive-in ticket buyers would not be left in the lurch when walk-in ticket buyers were allowed in. (The exact same show runs in both the walk-in and drive-in rooms.)

After being greeted by mask-wearing ticket takers outside the Toronto Star building, visitors on foot pass through the lobby into a darkened corridor leading to the 40,000-square-foot exhibition space. An elevated viewing platform is at the centre, flanked by mirrored pillars ideal for immersive selfies. In case you’re not sure how far apart to stand from other patrons, “social distancing circles” are projected on the floor.

During a VIP preview, the producers rhymed off the show’s stats: 600,000 cubic feet of projections, 90 million pixels, 53 projectors. When the lights darken, images from famous works like The Potato Eaters, Sunflowers, Bedroom At Arles and Starry Night morph and meld into each other.

Some images move across the walls and floor, while others appear more static at first. Gradually, individual brush strokes shift and undulate as the soundtrack runs a gamut from Bach to Thom Yorke. It’s an entirely visceral experience, with no context about van Gogh included. The impressionistic images are abstracted into a loose, thematic narrative.

It’s all very perplexing. But it’s also very calming to be sealed off from the uncertainty of the COVID-stricken outside world in a large industrial space with masked strangers. Just let the chunky digital brushstrokes wash over you.

“It’s somewhat biographical,” explains Ross of the narrative. “There’s an attempt to delve into his psychology and to capture what he might have been feeling. You have this moment, which is my favourite moment of the show, where this symphony of colour crescendos to the music. Then the room becomes completely speckled in color.”

The space is also part of the appeal. The Toronto Star printing press will be torn down eventually so it’s a chance to see this building before it’s gone. And thanks to bureaucratic red tape and safety regulations, it is rare for former industrial spaces in Toronto to be repurposed for large-scale art events.

“The gimmick is the transformation of an industrial space, which is bricks, cement floors, columns and beams, into art,” explains Ross. “And in particular, Van Gogh’s art, which is quite organic. It’s sunflowers and clouds. How do you take a steel beam and turn that into art?”

Ross is a veteran of the big-budget theatre world who counts a Canadian production of Andrew Lloyd Webber’s Cats among his credits. He staged the “unauthorized” The Art Of Banksy show in the Junction Triangle in 2018 so he knows something about reanimating an industrial relic.

He hopes Lighthouse Immersive will eventually host multiple projection shows by contemporary or local artists alongside van Gogh. He speculates the space could be used for interactive cinema experiences, requiring audiences to move as part of the narrative.

“You go see Mission Impossible, but instead of sitting in seats in a theatre, you’re climbing over walls and encountering different things as as the film is happening,” he says. “You’re actively happening.”

Ross compares immersive entertainment to a Mirvish show or a Live Nation concert – but significantly less expensive. Walk-through tickets for Immersive van Gogh start at $35 and drive-thru tickets are $95 per vehicle.

The demographic for the show is broad but at the moment skews female, ages 20 to 40. Visitors to selfie-friendly shows Happy Place and Museum of Ice Cream will get it, Ross says. He hopes the audience expands to eventually include “the true art gallery” crowd.

“We’re not operating with government subsidies,” he says. “There’s plenty of room for pricing to go up in the exhibition business because pricing in other types of live entertainment is still significantly higher. It’s up to us to deliver something that has entertainment value and value for the ticket that we’re asking people to pay for.”

It’s not hard to draw parallels between van Gogh’s life and life during a global pandemic.

The painter has a reputation as a depressed, angry person who voluntarily spent time living in isolation in an asylum after mutilating his ear. During that period, he was very productive and created several notable works including Starry Night, which now hangs in the Museum of Modern Art in New York City.

Van Gogh’s story is so popular that it has been turned into two major movies in recent years – the animated Loving Vincent in 2017 and At Eternity’s Gate, starring Willem Dafoe, in 2018. There is an entire museum devoted to his life and work in Amsterdam. Though he is only known to have sold one painting in his life time, Christie’s auctioned off one of his asylum period paintings, Laboureur Dans Un Cham, for US $83.1 million in 2017.

The mythology that surrounds van Gogh can be traced back to his sister-in-law Jo van Gogh-Bonger, who eventually inherited the paintings, sold 250 of them and published his letters.

“She built this grandiose story about this mentally ill person who is obsessed with his art and won’t stop for anything,” explains Ilene Sova, the Ada Slaight Chair of Contemporary Painting and Drawing at OCAD University. “He’s become this icon of white male European artists who never made a dime while he was alive but everyone appreciated him after he died.

“I’m not sure that people are obsessed with the way he paints or if anyone could describe why they love his brush strokes or the colours that he chose,” she adds. “He was the first artist to use colour as a form of expression in European art.”

The way Immersive van Gogh renders the texture of the painter’s brush strokes is one of its delights, particularly when inspecting subtler and trippy details – like the movement of water and twinkling stars in Starry Night Over The Rhone – up close.

When Sova shows van Gogh work to her students, she emphasizes the directional flow of the brush strokes.

“The brush stroke can be an extra way into a painting instead of thinking about how to make the painting smooth like glass. How can the paint be become part of the art piece itself?” she explains. “The paint becomes another subject within the painting.”

Van Gogh paintings very clearly bear the mark of the artist’s hand in contrast to periods before and after when paintings often looked “blended out,” Sova says.

“He takes what the impressionists do – where they break the brush stroke into small pieces – and then he pushes it another step further. He’s sculpting the paint. I don’t know if you’ve seen Starry Night in New York, but it’s so thick. That was the thing that shocked me when I saw it for the first time as a young person.”

How to translate the texture of a painting for digital experiences is something all painters marketing themselves on social media face. Digital painting has long been part of OCAD’s curriculum but, on a more pragmatic level, Sova is grappling with how to conduct studio painting classes online when school resumes this fall.

“I have worked on Vincent van Gogh many times, and in each production I was requested to avoid the theme of madness,” Siccardi writes in an email. “Yet, I find it interesting how his art represents this artist’s instinct to twist the rules. I think his art is the result of his inner agony and his terrific dreamer nature.

“Vincent has the peculiarity of the brush stroke materiality. His ‘friend’ Gauguin often reproached him for ‘wasting the color,’” he adds. “An immersive work on van Gogh cannot ignore this – it is essential that its pictorial sign majestically emerge, making our work a tribute to this vigour. Projection on large spaces and dimensions is essential to perceive its greatness.”

Siccardi says that he studies high-resolution images from a “digital material” and technical point of view before determining if a painter should get the immersive treatment. Whereas a museum allows viewers to see the entirety of a work, immersive art is about going “inside” to uncover “expressive potential,” he says.

Asked what he thinks of critics who call immersive art interpretations of old masters gimmicky, Siccardi responds the medium is no different than cinema: there are works of art and there is popcorn entertainment.

“In immersive art we have the same distinction,” he says, adding that what he does is not a substitute for going to a museum to quietly gaze at a painting.

“I like to think that after enjoying an immersive work of mine about a great author, people go and see it ‘live.’”