Fashion’s most fantastical designer touches down at the ROM 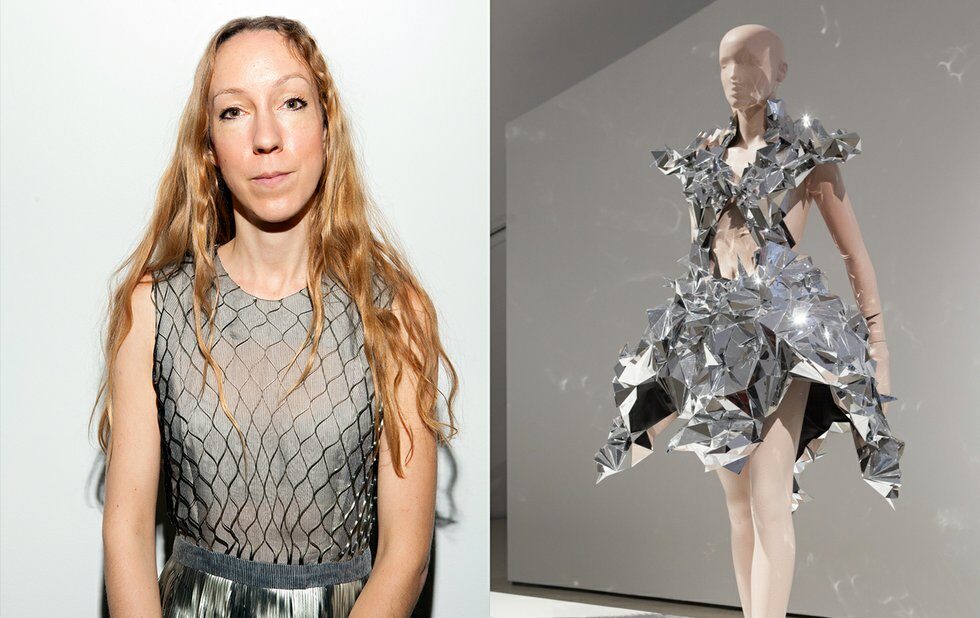 The Royal Ontario Museum is throwing its couture hat down.

The touring show Transforming Fashion, which runs to October 8 (see listing), showcases 10 years worth of the innovative Dutch designer’s sculptural dresses, plus one original commission and a complementary installation by Canadian architect Philip Beesley, a van Herpen collaborator.

If you’re a long-time NOW reader, you may have seen van Herpen’s harp-belted creation on the paper’s cover in 2011, worn by Björk, who collaborated with the designer on synesthesia-inspired outfits for her Biophilia album artwork and tour in 2011.

Not unlike the Icelandic musician, van Herpen often draws inspiration from concepts in science, technology and nature such as voltage, crystallization, mummification and magnetic motion. Her penchant for pushing feminine forms in unusual directions has also attracted musicians like Lady Gaga and Solange, who wore a van Herpen piece to this year’s Met Gala.

A 3D-printed skeletal dress from her 2011 Capriole collection on display at the ROM was inspired by her love of skydiving and the way it affects the body in free fall. Nearby, a “snake dress” from the same collection is comprised of twisted serpentine forms made of black acrylic sheets. Another creation fashions finely woven metal gauze to achieve the effect of a puff of smoke from a refinery. It has oxidized over time to a brownish hue from its original silver when it debuted in 2008. 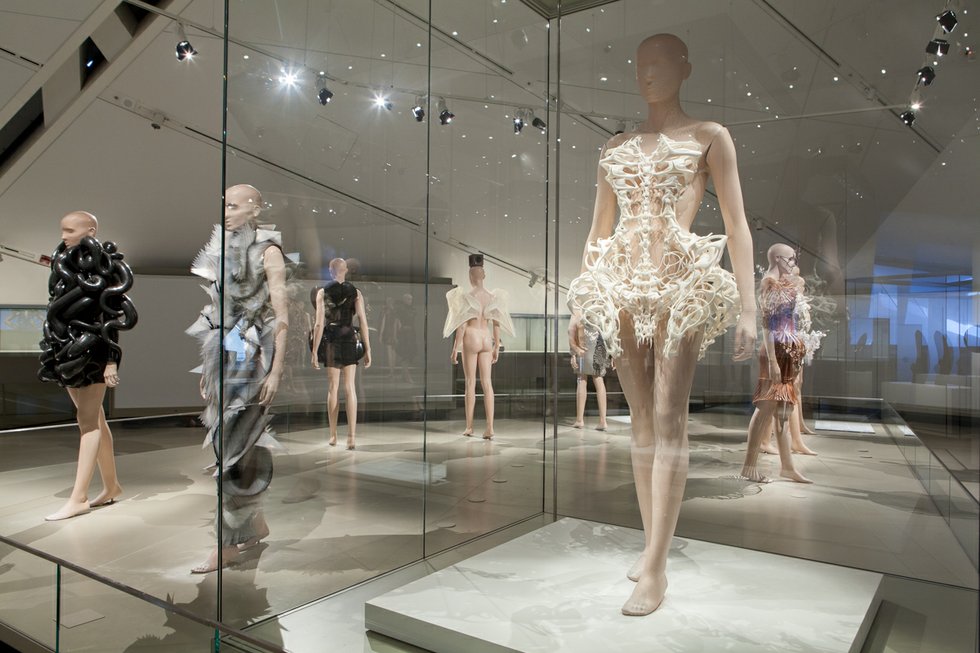 A 3D-printed skeletal dress (right) was inspired by the designer’s love of skydiving. Another resembles a swarm of snakes (far left). 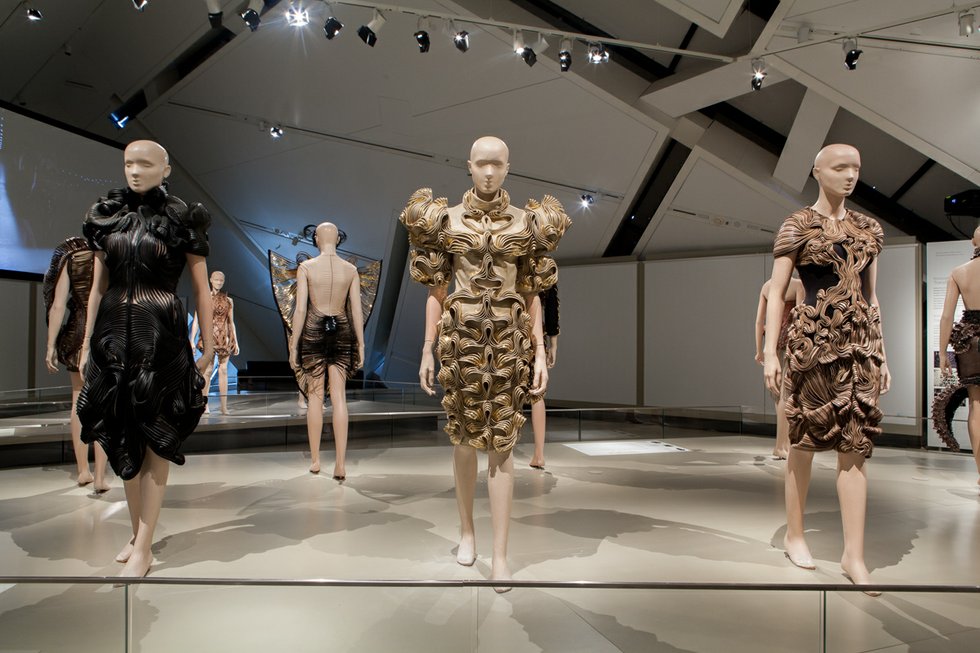 During a press tour of the exhibit, van Herpen repeatedly pointed-out hand-stitched details. Reviewers tend to focus on van Herpen’s use of technology, namely 3D printing, but she often stresses craftsmanship.

“The show really explores that space between fashion and art, and I think that’s an important space to discover, especially in this time where fashion has become more commercial than ever,” she tells NOW, adding that speed of fashion cycles is a challenge. “Craftsmanship is almost gone. Time for new development is not there. Fashion moves so fast that it actually goes really slow.”

After the media tour, van Herpen participated in a public talk before returning to Europe to meet the June 26 deadline for her next Paris couture show. Though the ROM show is strictly sculptural dresses and shoes, her runway presentations alternate between wearable and artful.

Her work’s three-dimensionality is both cerebral and aesthetic. It comes partly from her background in dance and desire to explore the space around the body, but also a way to avoid using prints, which she thinks are generally ugly.

“Textures are so important but in a way there’s print inherent in that,” she explains. “It’s never a flat print. I need the real shadows and the real texture.” 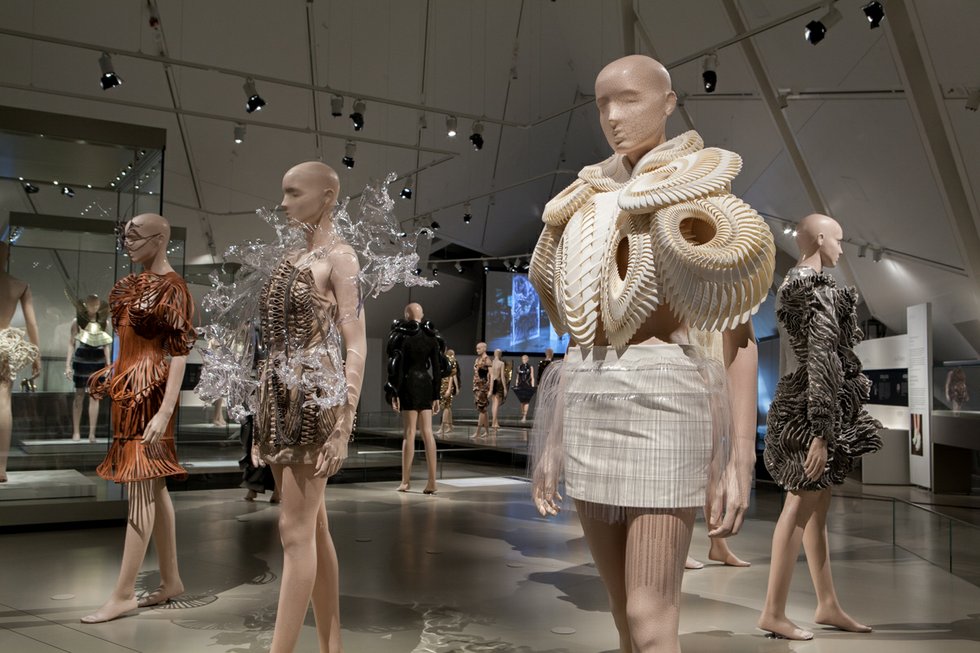 Van Herpen is known for combining fine handiwork with technology such as 3D printing. The dress on the left was her first 3D-printed dress and was inspired by fossils.

She did her internship with the late designer Alexander McQueen, who was also the subject of a touring museum show in recent years.

“The pieces he made had a strong dialogue with the people wearing them. I saw fittings where people came to the atelier and you felt like the artist has made something just for a person, and it worked,” she says of her experience with McQueen. “That’s why fashion is a bit different than other forms of art. You can have that very intimate connection between the artist and the consumer.” (Ironically, her favourite collection of his is the print-heavy Atlantis from spring 2010: “He’s one of the few designers that can actually handle prints.”)

Walking around the ROM and inspecting details like the fossil-like bust on a 3D-printed dress or radiation wave-inspired swirls made of leather, you can’t help but feel like you’re getting half the experience without seeing these dresses in action.

A jagged dress made from mirror foil from van Herpen’s 2013 Voltage collection flings light around the gallery, suggesting the way it might transform a space as the wearer moves around a room. For the designer, it’s a trade off: you aren’t able to closely inspect details or discern how the dresses look during a runway show.

“The movement is an element you will not see in the show, but the movement and the interaction between the body and the garment is what I’m designing for,” she says. “I put everything on myself. It’s really important, the touch, the feel of it.” 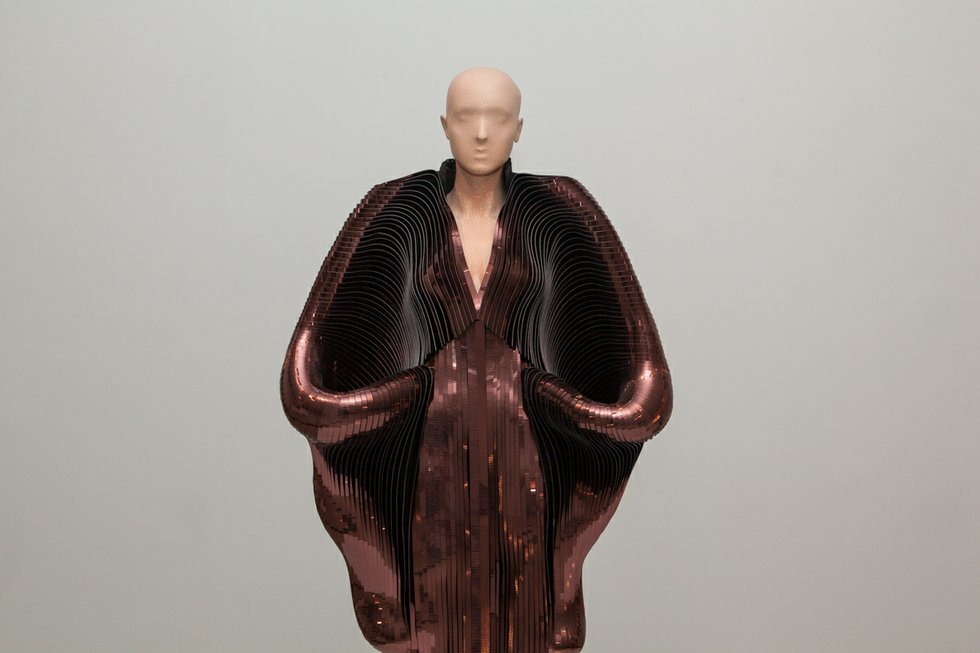 This metallic dress was part of van Herpen’s 2012 Hybrid Holism collection, which she created after seeing one of Philip Beesley’s Hylozoic installations.

You get a sense of that motion by doing a 360 around a glittering, statuesque metallic tulle dress. The piece is one of the most striking at the ROM, and was part of a collection inspired by Beesley’s Hylozoic Ground installation, a hanging latticework of moving whiskers and buzzing fronds that resembles a robotic forest canopy.

The two started collaborating on fabrics for her Voltage collection and created an original commission for the ROM that was part of her fall 2017 Aeriform collection. The Dome Dress, made from over 300 zinc-coated steel forms, hand-moulded into three-dimensional domes, is displayed in the gallery below Aegis, another sentient architectural canopy created by Beesley.

Beesley’s installations reference abiogenesis – the way life emerges from non-living forms – and the ways technology can conform to nature and create self-renewing systems. His work echoes the Aeriform collection, which is all about harnessing air and light around the body.

“The Dome Dress is about creating a movement or an aura around the body,” says van Herpen.

Where would she wear it? 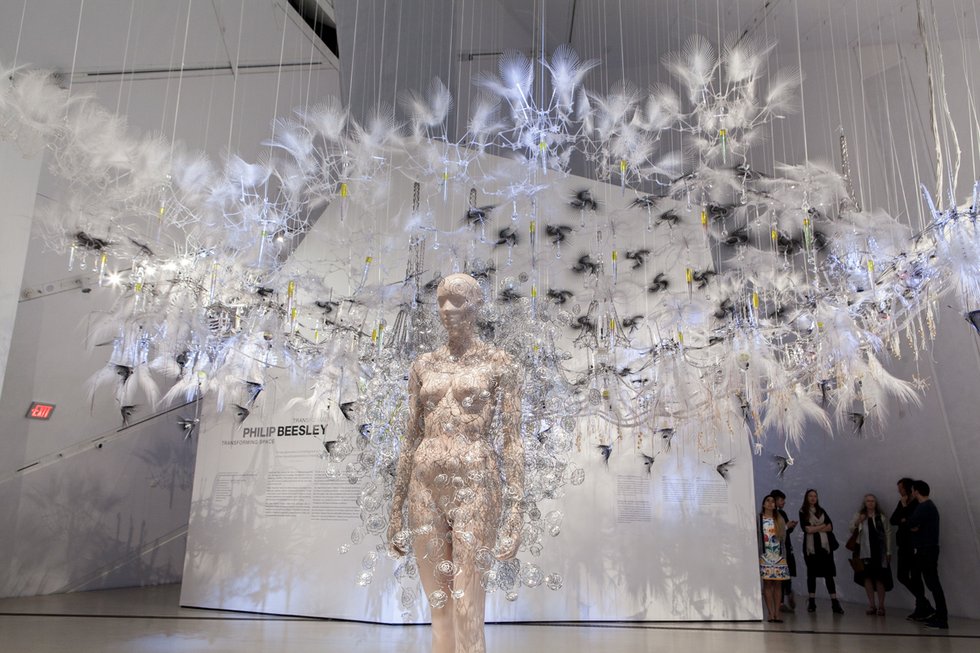 The Dome Dress from van Herpen’s fall 2017 Aeriform collection is paired at the ROM with Philip Beesley’s Aegis installation, and “is about creating a movement or an aura around the body.” 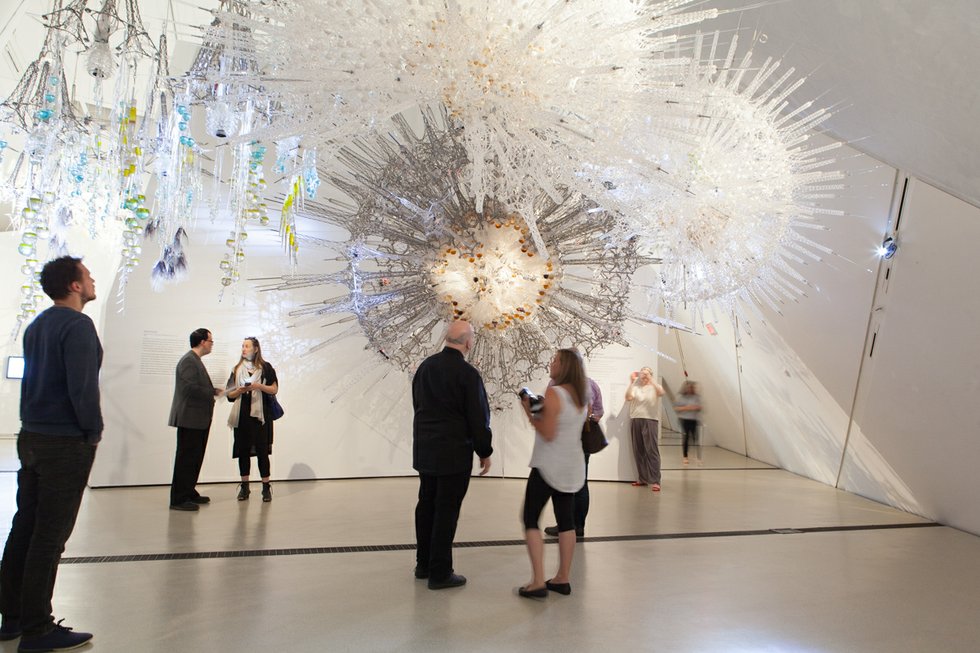