As the Toronto painter and mixed-media artist retires from his faculty job, he reflects on the art school's evolution over the past four decades 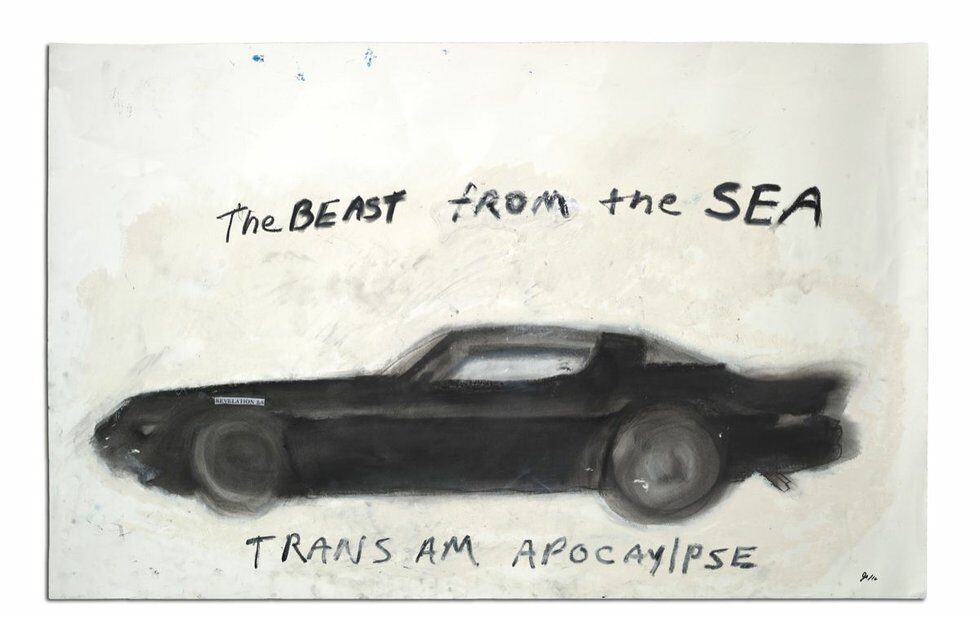 The Beast From The Sea, Trans Am Apocaylpse (2016), mixed-media drawing on paper by John Scott.

OCAD University is losing one of its most idiosyncratic figures this year: John Scott, a contemporary artist and long-time faculty member, is retiring from the institution after 38 years.

One of the first-ever recipients of the Governor General’s Award, Scott is best known for his storied career as a painter and mixed-media artist, but he’s also left an indelible mark on the organization he first joined as a student in the early 70s.

“John is a complete self-taught autodidact original,” says Michèle White, a fellow artist and OCADU instructor who’s been close to Scott since their student says.

“We would never hire a John Scott today, because he doesn’t have a degree. And yet, John’s influence on 40 years of learners and teachers is profound.”

As a fine artist, his style has been described as “bold, rough and characteristically crude,” with dystopian overtones and themes of power, class, anxiety and industrialization a constant.

But though he made his home in the drawing and painting faculty at OCADU, Scott’s art career has been in large part defined by his mixed-media and installation work, including a spinning Buddhist wheel powered by a motorcycle and – most notably – Trans Am Apocalypse No. 3, a muscle car onto which Scott laboriously scratched the entire Book of Revelations.

That stylistic breadth, Scott says, is one of the things he’s tried to impress most on his charges at OCADU over the years.

“You should never be strapped to one discipline,” he says. “It’s sort of inherent in the nature of the work that you’re going to run into different ideas, different forms and formats. You also respond to the audience.

“You can’t really depend on sticking with one discipline for your whole career. Otherwise, you ossify.”

Born in Windsor in 1950, Scott began working on assembly lines at 15 to support his family, with the auto boom and the local labour movement sparking his early imagination. He followed his brother to Toronto, and eventually landed at OCADU (then the Ontario College of Art) in the early 70s, at the tail end of Roy Ascott’s notoriously tumultuous time as the head of the school.

“They were dismantling the sort of ossified approach to art and art-making. It was radically different than before. The emphasis was on the conceptual, rather than the didactic, let’s say,” Scott recalls.

“It was great. It was a complete mess.”

Countless staff members were fired, curriculums were abolished, classes were routinely cancelled for school-wide debates in the auditorium, and, Scott says, everyone ended up getting passing grades. The institution was being torn down from the inside – and not just figuratively.

“One day, students in a lecture just got fed up and went berserk and started tearing down the walls, literally – exposing the inner workings of the room, the electricity, the plumbing,” Scott says.

In a way, White says, this chaos opened the door for Scott. “The idea was an open concept where people didn’t need credentials. Into that, John kind of fell, and maintained his place when the structure returned.”

Scott never finished his studies, but transitioned into running the school’s gallery, which, he says, “was pretty dull, up until that point.” The first week’s exhibit, he recalls, was Sexuality In The Arts.

From there, Scott says, he “sort of gradually slipped in” to teaching. Scott’s approach focused mainly on student mentorship: “I was trying to get them to try new forms and ideas, working with them individually, trying to incorporate all the different ideas I’d worked with all in the years before.”

Simone Jones, a fellow OCADU faculty member, recalls Scott guest-teaching one of her classes in the integrated media program, which encompasses film and kinetic arts, among other disciplines.

“He came into my class and said, ‘You guys probably don’t know who I am ’cause I’m in drawing and painting – but really, I work from science fiction.’ It was so refreshing, because rather than saying, ‘I’m here cause I know how to turn on a camera’, he said, ‘I’m here because I engage with ideas,’” she says.

“As soon as he began to talk to them about how narrative drives the work, I just knew that he could teach anybody.”

White, who co-taught courses with Scott in recent years as he battled illness, says Scott was “never really an educator in any traditional way.”

The OCADU Scott is leaving is not the one of his youth. For one thing, the time of students ripping up walls is long past. “Students now demand order,” says Scott. “At least, a degree of it.

“They’ve also really embraced social causes – everything from Indigenous rights to LGBTQ. The students are definitely more organized. They demand an interface with reality, the contemporary reality, and the faculty has to run to keep up.”

Scott seems heartened by these changes, though he does urge the students he sees zeroing in on goals of commercial success to keep thinking outside the box.

“Their heroes are artists who are making it in magazines and selling in galleries. That’s who they’re aspiring to be like. I wish they weren’t so much like that,” he says.

That constant exploration of possibilities is the hallmark of Scott’s career as an educator, Jones says: “I’ve never thought of John as putting his will on to what a student’s work should be. Rather, it’s about unlocking their potential.

“You could say that about every successful instructor – their job is to get people to be curious about the world around them, and the fact that John does that is a real beacon for students. We need more like him, that’s for sure.”