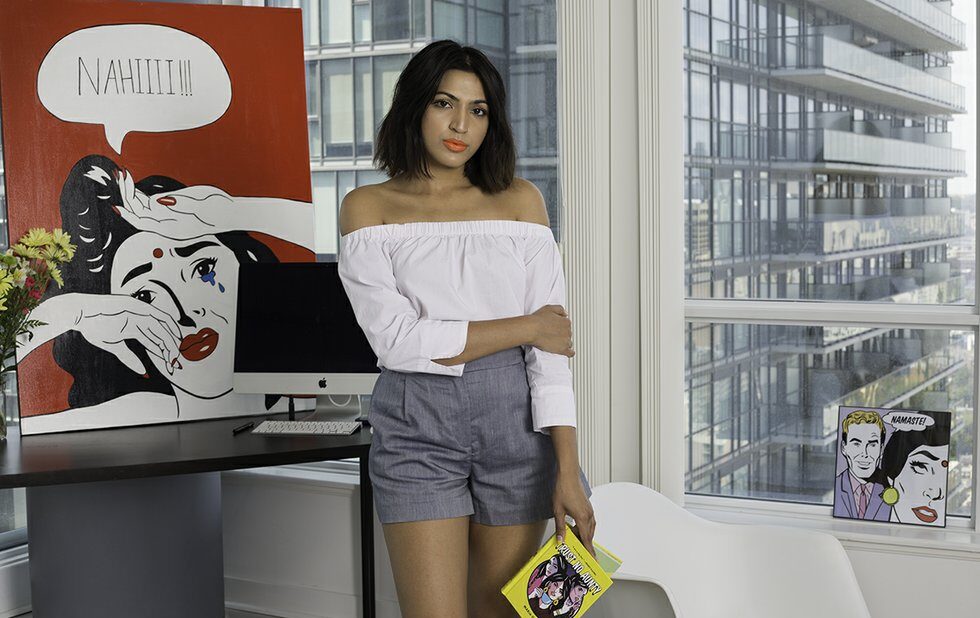 Manifesto Festival has announced details of its visual art program, which will feature a new arts market at city hall and a group show that includes work by Toronto-based Instagram star and pop artist Hatecopy.

Curated by Ashley McKenzie-Barnes and hosted by Brienne Yvonne and Nikitha Cornwall, the art exhibition will kick off the festival on August 15 at Free Space (68 Claremont St) and will be up until August 22. The exhibition is all about diversity and inclusion.

“In the past, we have done more focused shows. This is not it,” says Barnes of the wide-ranging exhibition. “We are trying to have a distinct range within this year’s show – not just in the work that’s being presented, but the artists as well.”

Hatecopy, aka Maria Qamar, is best known for illustrations that combine Roy Lichtenstein-style comic aesthetics with melodramatic South Asian characters. She published the book Trust No Aunty last summer and has been featured on the television series The Mindy Project.

For Manifesto, she’ll create a custom pop-up installation that touches on marginalized South Asian communities. The piece will be in line with the curatorial theme for the year: a 3D experience.

“In the past there’s been a lot of shows with just pictures in frames, lovely photographers, lovely stuff on the wall. We are really not trying to do that this year,” explains Barnes. “We want it to be an experiential exhibition where you walk in and are just flung into the environment.”

According to Barnes, the festival’s original concept was to create a platform for artists in the hip-hop community who aren’t given a platform in the mainstream media. The art show extends that mandate to visual artists of colour.

“If we just think about the galleries showing at [international art fair] Art Toronto or any gallery that’s at the next new major Toronto art festival, they just don’t speak to that demographic,” Barnes said, adding, “We create a platform, which also invites the audience who are reflected in those artists’ work to come and enjoy contemporary art.”

Manifesto’s programming encompasses music, arts and dance. In addition to the art show, a one-day arts market takes place at Nathan Phillips Square on August 17, the same day as the festival’s main event: a free concert with reggae artist Chronixx.