Nadya Kwandibens merges worlds with a photo mural at Ryerson 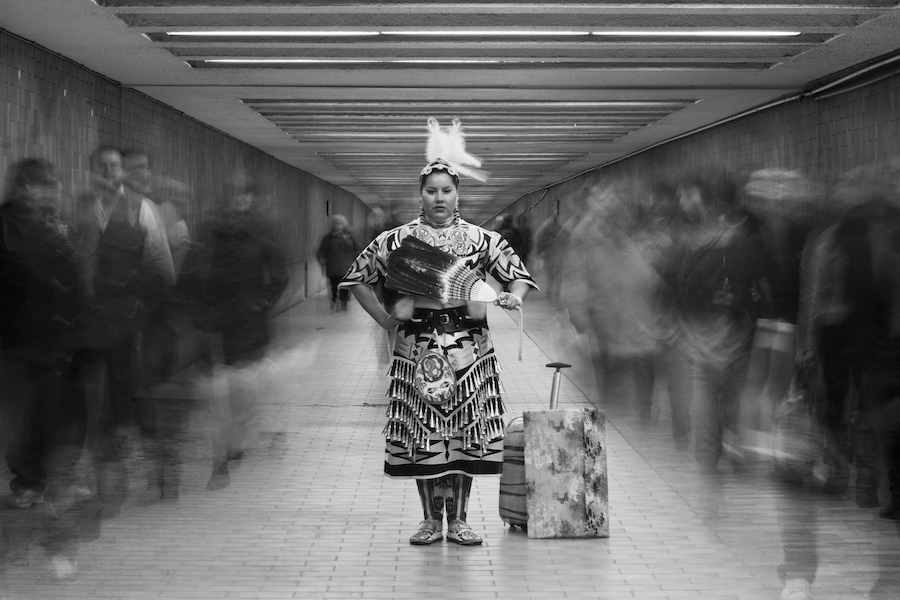 Nadya Kwandibens's 2010 photo of Tee Lyn Duke at Spadina Station is on display at Ryerson University over the library's west entrance.

Students returning to Ryerson University’s campus will be greeted by a photograph of Tee Lyn Duke towering above the library’s west entrance.

Shot by artist Nadya Kwandibens in 2010, the black-and-white portrait shows Duke, a member of an Anishinaabe dance troupe, standing firm in traditional regalia as ghostly rush-hour commuters whiz by in the long pedestrian tunnel connecting subway lines at Spadina station.

The image is from Kwandibens’ portrait series Concrete Indians, which explores the ways urban spaces affect Indigenous identity. School officials chose the photo to commemorate Ryerson’s participation in the Native American Indigenous Studies Association conference, which was supposed to take place at the University of Toronto this past May. Like everything else, it was cancelled due to COVID-19.

Ryerson proceeded with the photo installation and unveiled the work last week. The many students learning remotely this fall will have plenty of time to see the photo in real life: the 10 x 15.7-foot portrait is on display for five years.

It’s a fitting photograph for a school with a reputation as a commuter campus, but also given recent attention on a statue of the school’s founder, Egerton Ryerson.

Ryerson was an integral figure in the implementation of the residential school system that sought to systematically wipe out Indigenous culture in Canada. In mid-July, police arrested three people after activists covered the statue in pink paint during a Black Lives Matter-led protest calling for the statue to be removed.

Kwandibens’ photo of Duke now stands as a counterpoint to that statue. Her work is part of a long process of Indigenous reclamation that is gaining higher profile in the country’s mainstream art institutions and pop culture.

Through her company Red Works Photography, Kwandibens creates images that combat colonial representations while evoking the emotional lives of Indigenous people living in cities today. It’s a theme that springs from the artist’s own desires and longing after leaving home in the Animakee Wa Zhing First Nation in northwestern Ontario and moving to cities to to build her career as a photographer.

I like the vibe of it and how it was shot. It was photographed at that long corridor at Spadina station. We went there at rush hour in 2010. I wanted it to be a long exposure and specifically during rush hour because people are rushing home after a long day of work. They’re tired. I wanted to get a sense of movement at this location. You see this woman in full traditional regalia and she’s the only one that’s still. It forces you to pause and really take in elements of the portrait. And to realize that those are people walking on each side of her. They almost look like ghosts.

Every time I think about the portrait new concepts come to mind. There she is, just standing perfectly still and it’s as if she hasn’t moved. As an Anishinaabe woman, she’s fully present within this moment and at that location and on this land. And this is all Indigenous land. It’s as if she’s in two worlds. Especially for myself, there’s a pull towards living in the city and going for the job, going for school, for these opportunities. There’s always that pull. But then there’s another pull that pulls you back home. We belong in both worlds.

Has the way you look at the photo changed in the past 10 years?

The impact that it’s had on me has always been empowering as an Anishinaabekwe woman myself. It’s hard to be away from home, let’s just say that. For Indigenous folks – and I think this happens in any city you go to – if you see another Indigenous person walking down the street, there’s always that acknowledgment. You do the head nod. That sense of community and unity is always present if you’re Indigenous in the city. You want to see your kin. You want to see yourself.

How did you meet Tee Lyn Duke, the subject of the photo?

We’re both from Treaty 3, in and around the Kenora area. But Treaty 3 is much bigger than that area itself. I think we met through mutual friends once I moved to Toronto. The idea for the series came suddenly: What more can my photography and work do to empower the Indigenous community? If I’m feeling disconnected, there’s others feeling the same way. That’s how the idea for the series came about: To photograph our sense of belonging, even within the city.

Why was it important for you to use black-and-white photography for this series?

I wanted to use black and white as a specific aesthetic for this series as a way to combat the historical uses of that medium. It’s in direct opposition to the work of [American photographer] Edward S. Curtis; to bring that black and white medium into a contemporary context. Representation is so important and key in all of the work that I do. To use that black-and-white format in a way so it’s not detrimental to how society sees Indigenous people today.

There’s so much beauty and power within our people and our culture and our connection to our culture and where we come from. And to see things in black and white, sometimes there are no grey areas when it comes to understanding who we are as Indigenous peoples. Essentially, I’m using the medium to combat those stereotypical views of Indians on a horse, buckskin and headdresses.

This work is going up amid calls to remove the Egerton Ryerson statue and wider conversations around who we choose to memorialize in public space. What’s your view of the movement to tear down statues?

I fuckin’ love it. It would’ve been so awesome to be there [in Montreal] when the John A. Macdonald statue came down. I would’ve been fist pumping the air and photographing the event. One of my friends [Riley Kucheran, associate director of the Saagajiwe Centre for Indigenous Communication & Design] at Ryerson tagged me in one his stories with one of our press photos and said, “As colonial statues are being knocked down, here we have at Ryerson this portrait of an Anishinaabe woman going up.”

The gist of his Instagram story was more of this needs to happen to amplify not just women’s voices, but Indigenous women. More matriarchy. More of what Indigenous women have to say. More of that presence. I hadn’t even really thought of it that way. All of these statues are coming down and to see a portrait like that go up at Ryerson was really powerful.

Reclamation is such a widespread theme in art. Why this moment right now do feel like this theme has become so prevalent?

It’s not just now. We’ve been doing this work, not just as artists, as people across the board in so many different professions. It’s been going on for years, this reclamation, this resurgence, this focus on decolonization. Going back home. Reclaiming and revitalizing our languages. Raising our kids with the culture. Going back to the land. Being back on the land. There’s so many ways in which this work of reclamation is being exemplified and practiced on a daily basis.

When I look at my news feeds, the native news feeds are all about language, culture and who we are. It’s this constant beautiful stream of different projects that people are working on. It’s really exciting and meaningful to see that. I’m at an age now where a lot of my friends have kids, they’re married, they’ve bene working in their chosen profession for years. To see their kids getting older is so beautiful. I get really emotional when I see all my friends baby pictures. This work has been going on within the community for so long. It’s always been there.