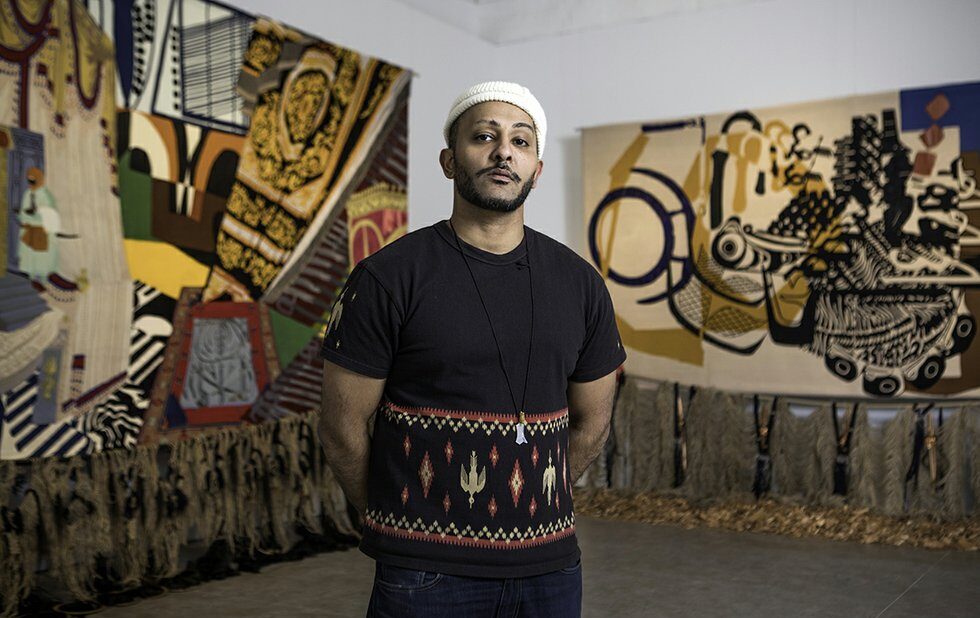 MEDICINE FOR A NIGHTMARE (THEY CALLED, WE RESPONDED) by NEP SIDHU at Mercer Union (1286 Bloor West). To March 23. nepsidhu.com.

That’s when he and curator Cheyanne Turions began working together on Medicine For A Nightmare (they called, we responded) at Mercer Union, Sidhu’s first solo exhibition in Toronto.

The Scarborough artist spent an entire year making one of his intricate tapestries in his Malvern studio and his “mobile studio” in New Delhi. For other pieces, he spent hundreds of hours engraving metal amulets and pendants that adorn what he refers to as “medicine hats” and carefully embroidering motifs of swords and sound waves onto muslin.

The resulting show spans Sidhu’s multidisciplinary practice, from large-scale textiles and metalwork to sculpture and painting, and features nearly all new work.

The rising art star has already gained high-profile super-fans like Erykah Badu – she has worn his non-commercial clothing line, Paradise Sportif, and came to his Mercer Union opening on February 8 – and Ishmael Butler of Shabazz Palaces, his collaborator in creative collective Black Constellation. His interconnected pinball machines were a highlight of MOCA’s inaugural Believe show, and he’s exhibited at Aga Khan Museum, the Art Gallery of York University and the Heard Museum in Phoenix.

Medicine For A Nightmare focuses on Sikh culture, tradition, preservation and how memories are inherited and passed along. These themes are explored in the context of the 1984 massacre of thousands of Sikh people in India, known as the military-led Operation Blue Star.

For example, the exhibition’s showstopper, a 220-inch-by-108-inch tapestry from the series When My Drums Come Knocking They Watch, references the 1984 attack of the Sikh holy site the Golden Temple in Amritsar, Punjab, and the resilience of Sikh communities.

Surrounded by a patchwork of embroidery and paint, the tapestry depicts two men about to enter Hazūr Sāhib, another holy site in Sikhism, curtains drawn back as if inviting the viewer into the space. Swaths of jagged waves and embroidered swords – a reference to the strength of Sikh steel – fill the tapestry, while black hair weaved into jute macramé hangs from the bottom.

“When My Drums Come Knocking They Watch looks toward Sikhs as people who were saved by our sense of percussions, whether it’s the sound of swords or the cleaning of plates in the temple’s free kitchens,” says Sidhu.

His sculpture Formed In The Divine, Divine Of Form also references langar, the community kitchens in Sikh temples that serve free meals to all visitors no matter their gender, race, class or religion.

Weighing nearly 3,000 pounds, the sculpture is a rectangular concrete monolith with brass geometric ribbons and an imprint of the founder of Sikhism Guru Nanak’s hand. It symbolizes transferring knowledge from one generation to another. Dirt from Toronto and the Golden Temple surrounds its base. On a nearby wall, a large photograph taken by Sidhu on a recent trip to India shows piles of kitchen plates from the Hazūr Sāhib.

“I wanted to create an object that would not allow those who have been affected to be forgotten,” he says of the sculpture. “I wanted it to be a tool that charges memory again.”

A sense of remembrance and resilience flows through the two rooms at Mercer Union, with each work referencing ancestry, whether it’s Sikh traditions or Sidhu’s own family’s experience of running a metalwork shop in Scarborough.

The amulet titled The Books And The Scripts Were Stolen, Our Steel Is Forever references the looting of the central library during Operation Blue Star, where vital books and manuscripts telling the stories of religions and communities encircling Sikhism were stolen.

To preserve that history, he’s engraved it into an impermeable material: steel. He explains how Sikh metallurgy has its roots in Rwanda, whose people then gifted that knowledge to Sri Lanka, which then transferred to Punjab. “The arrows on the amulet represent the Chera dynasty of Sri Lanka, the blade for Rwanda and the symbol Ik Onkar, which means one supreme reality,” says Sidhu.

This is the first time Sidhu’s work has explored the aftermath of the 1984 massacre in such a focused way, and he hopes the exhibition will bring Toronto’s Sikh community together.

“The intention is to hopefully create a sustainable conversation. I’m not interested in the show presenting itself as any one answer, because exhibitions come up and come down,” says Sidhu.

“We as a community have felt the weight of such an event, so if we’re going to talk about it, we have to ensure that we not just sit inside our trauma, but also deal with the healing.”