As the all-night art event expands to Scarborough, exhibitions will tackle amalgamation, immigration and tensions between downtown and the suburbs 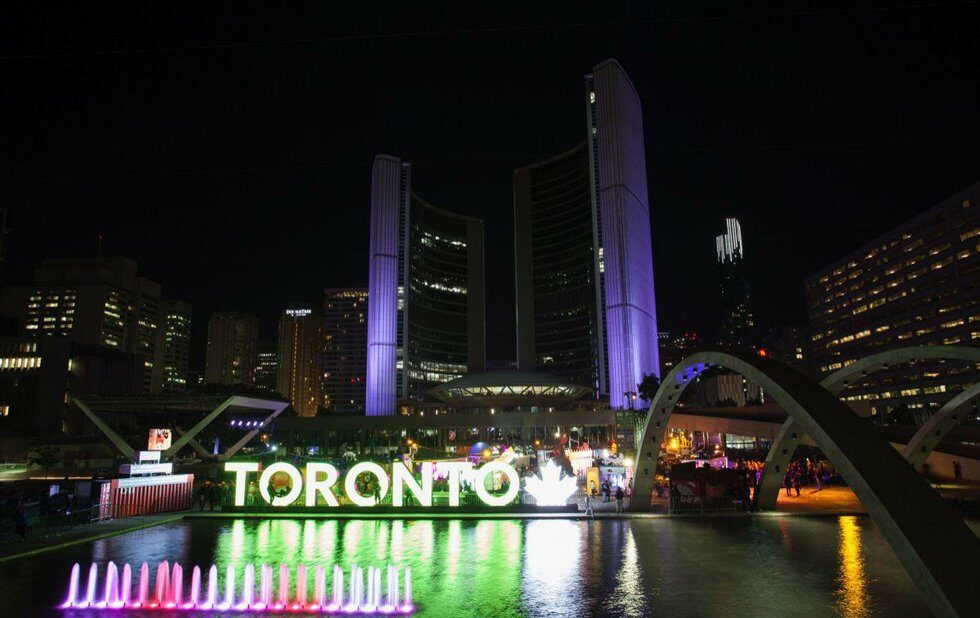 A rendering of Hiba Abdallah’s installation Everything I Wanted to Tell You at the Scarborough Civic Centre.

The lingering effects of amalgamation, borders and the downtown core versus the suburbs will play out across the city at this year’s Nuit Blanche exhibitions.

It’s appropriate artists are grappling with these themes given Premier Doug Ford’s contentious decision to redraw the boundaries of the city’s election districts by cutting the number of council seats from 47 to 25 ahead of this fall’s municipal election.

The 13th annual, all-night art event takes place on September 29 and features 81 projects spread across three main exhibition zones encompassing six neighbourhood hubs that includes – for the first time – Scarborough, where a significant amount of work will be on display in and around the Civic Centre. In all, around 450 artists are participating.

This year’s curatorial theme is You Are Here, which is meant to place artists and audiences at the centre of ongoing debates around the city’s evolving social fabric as well as the influence of historic and contemporary immigrant communities. It also marks the second consecutive year Nuit Blanche has had a curatorial theme.

“There’s the conversation about the core versus the margins, and about shifting of borders and who determines the centre versus the core,” explains Jeanne Holmes, programming supervisor for the city’s cultural events. “What kind of power shifts are happening in terms of authorities and decision makers? Those questions play a big part in how the city is changing and reflect in a lot of the content and themes in the projects this year.”

To encourage people to visit the projects centred around the Civic Centre, Scaborough Town Cetnre and in the five SRT stations, the TTC is extending all-night subway service on lines one and two and on the Scarbrough SRT (line three). Entrance will be free at Kennedy, Lawrence East, Ellesmere, Midland, Scarbrough Centre and McCowan stations.

Several galleries and museums will be open and exhibiting work in tandem with the city-run events, including the Art Gallery of Ontario, the Royal Ontario Museum, Bata Shoe Museum, Aga Khan Museum, OCAD University, 401 Richmond, Artscape Younge Place, the Ontario Science Centre, Drake 150 and the Drake Commissary and the Museum of Contemporary Canadian Art (MOCA), which is reopening in its new Sterling Road location that same weekend.

Here are some highlights from Nuit Blanche’s three zones, including a dumpling festival, a queer tribute to nightclub the Twilight Zone and a giant Lego sculpture.

Curated by Karen Alexander, the area around Nathan Phillips Square, City Hall, Church of the Holy Trinity and Toronto Coach Terminal will feature work touching on themes of citizenship, nationhood, memory and immigration under the banner We All Have Stories.

British artist Harold Offeh will transform City Hall’s loading dock into a tribute to shuttered nightclub The Twilight Zone as part of the interactive installation Down at the Twilight Zone. The 12-hour participatory event will revisit queer nightlife history with Offreh acting as host. Group Du-morphology is creating a 12-hour live soundscape with visual projections at Church of the Holy Trinity called Transmutations, which draws upon the history of one of Toronto’s earliest neighbourhoods, The Ward, which was home to newly arrived immigrants. In the underground parkade beneath City Hall Nathan Phillips Square, Gayle Chong Kwan will reference early immigrant neighbourhoods in the installation Preserved, which will feature collages of photos of buildings in early immigrant neighbourhoods preserved in salt and blown up to set-design proportions.

In Nathan Phillips Square, Ghana-born Ibrahim Mahama – who recently exhibited as part of Kassel/Athens art event Documenta – will hang a massive patchwork of jute sacks called Radical Histories that references the movement of international goods in Africa and at the Toronto Coach Terminal Meghan Ross is creating Make Your Mark, a sculptural installation that will feature thousands of fingerprints made from glue suspended from the ceiling and attached to walls. On City Hall’s podium roof, Nichola Feldman-Kiss’s photo installation an initial aversion to the plight of the sufferer (Pietà) will feature a series of life-size portraits exploring representations of masculinity among Black and Brown men. And in the Rotunda, video artist Tal Rosner and composer Christopher Mayo will stage the sound and video installation Lament inspired by a 1969 poem by Toronto artist bpNichol. 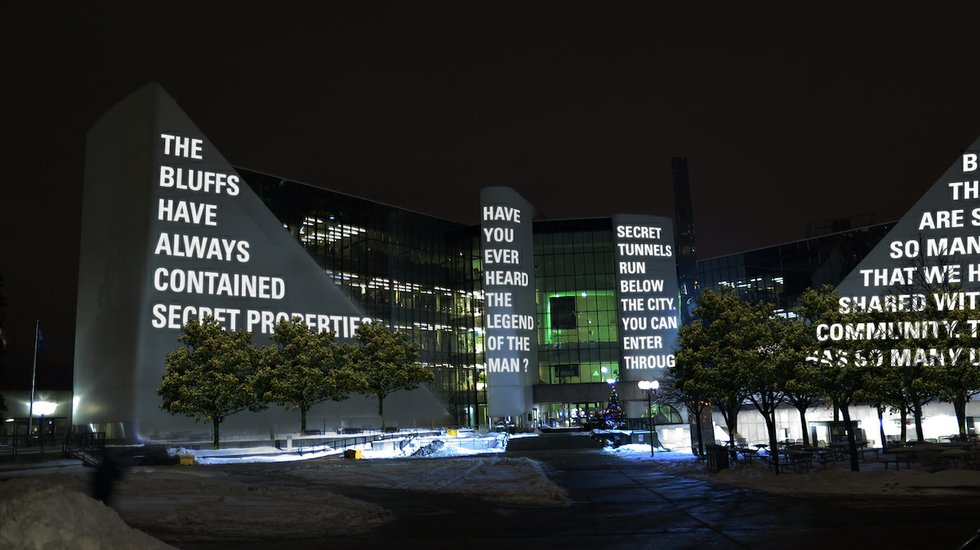 The curatorial theme in Scarbrough is STYLL and work chosen by curator Alyssa Fearon will “disrupt and subvert boundaries and borders between downtown and the suburbs, the centre and the margins, ourselves and each other.” At the Civic Centre, artists who identify as Black, Indigenous and people of colour will participate in The Filibuster, a politically inspired two-hour event featuring Indigenous drumming, painting, spoken word and dance. Director X – who made a splash at Nuit Blanche two years ago with the installation Death Of The Sun – is teaming with Lego sculptor Ekow Nimako to create Cavalier Noir, a seven-foot tall Lego sculpture of a Black child warrior riding a black unicorn.

Hiba Abdallah’s installation Everything I Wanted to Tell You is a large-scale text installation projected directly onto the 90-foot facade of Scarborough Civic Centre that explore stories and messages gathered in a workshop with 11 local residents. (Abdallah is also exhibiting at MOCA as part of the gallery’s reopening group show.) Inside the Civic Centre, youth-led arts group RISE will host an all-night poetry slam called Within. In the Civic Centre Public Library, authors Carrianne Leung and David Chariandy, broadcaster Amanda Parris, TIFF artistic director Cameron Bailey, Director X and others will participate in Sincerely, Scarborough, a series of talks, workshops and demonstrations.

The Civic Centre will also house the video installation Portals by Alyssa Bistonath, while Andrew Finlay Stewart’s video installation Wards will be on display in the council chambers. Scarborough-based artists Y+ contemporary and artist Jessica Patricia Kichoncho Karuhanga are taking over the Frank Faubert Woodlot East Trail at Ellesmere and McCowan with a two-channel video installation and a series of cast hands contributed by area residents as part of our roots are here, amongst the grasses/being who you are there is no other/collective gestures.

Tairone Bastien is curating the exhibitions at Yonge-Dundas Square, Bay between Queen West and Wellington West, as well as projects in the Scarborough stations and Scarborough Civic Centre, that are inspired by immigrant enclaves.

A big draw is sure to be Vancouver artist Ken Lum’s International Dumpling Festival on at Queen West and James in the old Ward neighbourhood. The installation will feature six dumpling vendors selling Jamaican, Finnish, Tibetan, Colombian and Polish versions of dumplings in kiosks adorned with banners created by Lum.

Another social mixer-type event is Brendan Fernandes’s On Flashing Lights, highlighting how dancing can be an act of resistance in queer communities. The installation feature a barricade of cop cars around a central stage where DJs from queer, immigrant and racialized communities will perform and DJ from 7 to 11 pm as the emergency lights flash.

One of the most expansive exhibitions at Nuit Blanche is French-Tunisian artist eL Seed’s Mirrors of Babel, a multi-part installation featuring structures inspired by Mohawk poet E. Pauline Johnson (Tekahionwake) at Yonge-Dundas Square and Scarborough Civic Centre. In between, five Toronto graffiti artists created site-specific murals inside stations along the SRT as part of a connecting narrative.