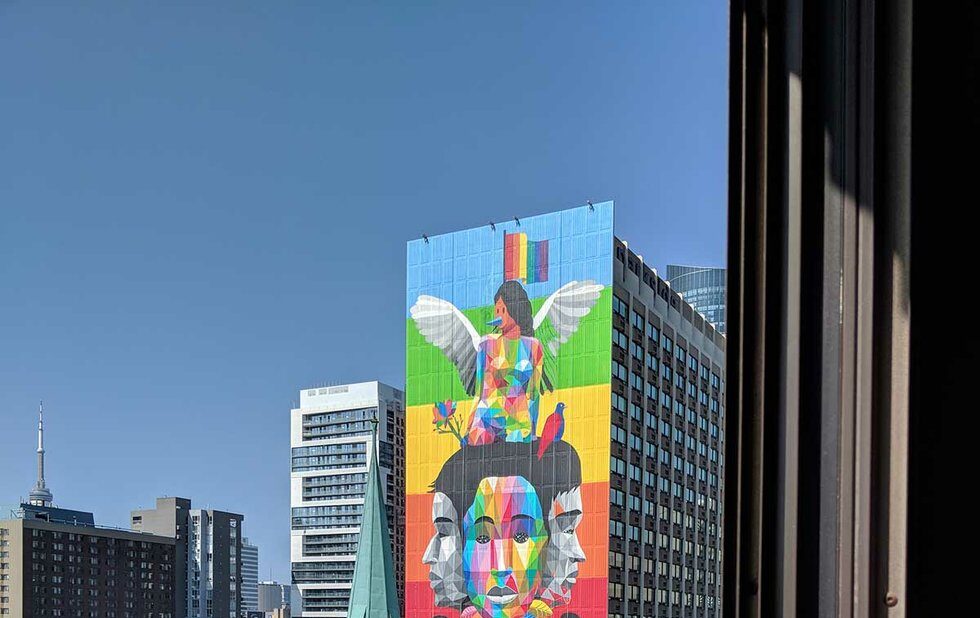 World-renowned Spanish street artist Okuda San Miguel has just completed the tallest mural of his career thus far: a vibrant 23-storey piece entitled Equilibrium on the Parkside Student Residence building located at Carlton and Jarvis. San Miguel worked in collaboration with Toronto charity, The STEPS Initiative on the mural, which began on June 20 and was completed on July 13.

“The most important thing about my work is how a place can change with just a painting,” says San Miguel.

This is his first piece in Toronto and his second in Canada following a mural in Vancouver that was completed in late 2017.

The psychedelic rainbow colours and geometric shapes make San Miguel’s work instantly recognizable. “The gay flag is like my palette because all the colours together symbolize, for me, the multicultures, multigender, everything,” he explains. An angel triumphantly bearing a vertical rainbow flag juxtaposes the horizontal rainbow stripes in the background.

The focal point of the mural is a geometric face with Indigenous features, according to San Miguel, as well as two other profiles of faces on either side. “I love to reference ancestral art,” he says. “I think you have to meet and to love your roots in order to go forward.”

An exploding Kaos star, bird-humans cradling the Earth and an animalistic twist on a winged Venus also make appearances on the busy mural. “It’s a spiritual composition,” San Miguel notes. “A lot of my works talk about the equilibrium between animals and humans and the universal equality and balance.”

The prolific artist’s works can be found all over the world from the Kaos Temple in Llanera Oviedo, Spain, to music festivals such as Bonnaroo and Life Is Beautiful in the U.S., to Kaohsiung, Taiwan, where you can find his 3rd Eye Dog mural, just to mention a few.

The project has also involved the local community in more ways than one. Local artists worked alongside San Miguel on the mural and it has received a very positive response from the community since its inception in June.

“People are saying that we are helping to shift positively, the energy that is here,’” says Stephanie Bellefleur, Toronto-based contemporary mural artist and art administrator for The STEPS Initiative. “We’ve had quite a few people who live in the buildings around here just be really happy with a great amount of gratitude.”

The STEPS Initiative has engaged various local artists, including illustrator Kayla Buium (known for her character the Nuknuk) and street artist Adrian Hayles, who also worked on the music murals on Yonge. The charity has also brought on local youth through Canada Summer Jobs to help with other aspects of the project, such as promotion and logistics.

Anjuli Solanki, director of community programs at STEPS, says that San Miguel’s design was selected from a short list of artists because it “really captured the diverse neighbourhoods that are intersected in this area.”

“Colour is something that is very healing for people,” Bellefleur says. “The way Okuda paints in more of a three-dimensional way makes it feel like you’re within the space and I think that makes people feel like they’re a part of the area and what is happening.”

San Miguel’s next stop will be Edmonton where he and his team will work on a six-storey mural.