Toronto’s Baby Larry is helping us get through the pandemic 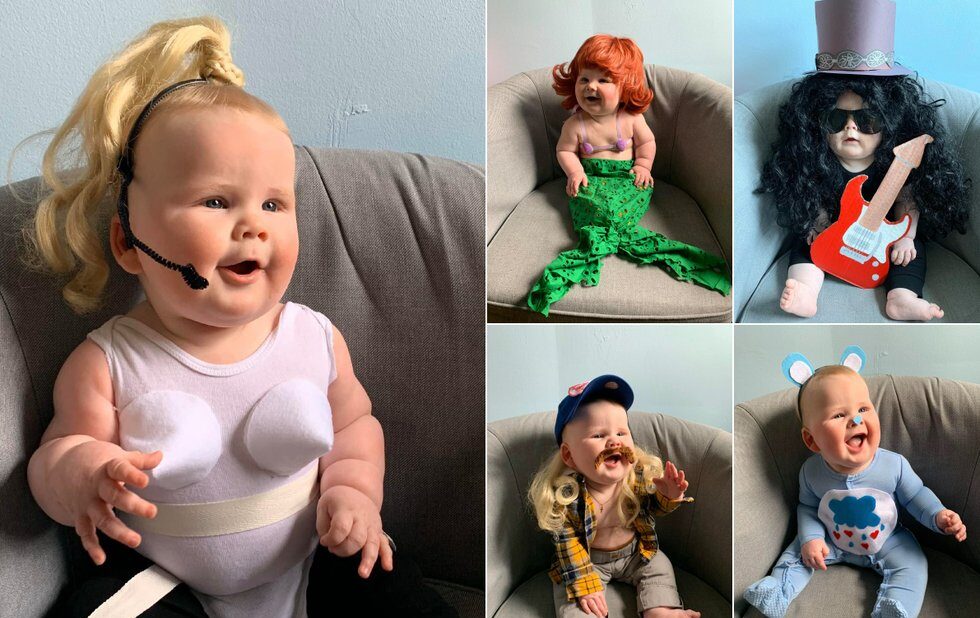 For Pat Thornton and Maggie Maloney, dressing their baby Larry up in different costumes is getting them through the pandemic – and providing joy to tens of thousands of grateful fans on the internet.

“I thought this could be something we did together that would be fun for the whole family,” says Maloney, an elementary school teacher, who came up with the idea.

The couple debuted the first look – Canadian astronaut Roberta Bondar – on Twitter (@patthornton) on March 14, soon after schools closed and they, like everyone, started staying indoors.

Using the hashtag #LarryLooks, comic and writer Thornton introduced their soon-to-be-famous baby with these words: “To help us all get through these troubling, isolating times we’re going to be dressing up Larry like different famous people using just things we find in our house (Maggie’s a craft wiz).”

Since then, Larry has morphed into real-life figures (Elton John, Ruth Bader Ginsburg, Gord Downie, Larry David) as well as fictional ones (the Paper Bag Princess – wearing an LCBO bag – Charlie Brown, suggested by yours truly, and a whole Harry Potter gallery).

“I’m surprised it’s so popular,” says Maloney. “I’m happy people like it, but I’m embarrassed when people say we’re helping them get through the pandemic. I’m making Halloween costumes. I said to Pat the other day it feels like Halloween all the time. I dress the baby up in a costume. We’re eating junk food. And we’re always scared.”

As a teacher with an interest in crafts, Maloney has all the materials she needs in a closet. And Thornton has lots of wigs from his sketch comedy work.

The couple admit that Larry, who turned eight months on April 18, is the perfect age for being a dress-up model.

“If he were a year older or a few months younger, this would not be possible,” says Maloney.

Larry is in costume for approximately five minutes per look, with Thornton distracting him at the side to make sure his face is in the light. The photos themselves take about two minutes.

They’ve had requests for Donald Trump and Doug Ford, but the pair want to keep things positive. Before every look, Maloney asks herself if a photo would embarrass Larry later on.

“It’s not the dressing him up as a girl [that would be embarrassing],” she says. “I want to raise a queer-positive, non-transphobic kid. I’m not raising a kid who’s going to be embarrassed that I put a wig on him. But I don’t want a picture to be rude.”

Some online trolls have suggested Larry might grow up with gender issues later on.

“We don’t care,” says Thornton. “I think the future of the world is those gender [divisions] are going to get so blurred and forgotten. So many people say, ‘Oh, he’s going to need therapy.’ Hey man, everyone needs therapy.”

Some fans hope they compile the photos into a book or calendar.

“There are already too many pictures for a calendar,” laughs Thornton. As of our talk, they had finished Look 41. “Also, it would be for next year, and would people be as interested then? We’ve always said we’re open to it being a book if it could raise money for arts workers and other people who need it now.

“We’re not trying to make [Larry] famous or anything. But if this can help some people that would be great, because we know a lot of people who want that book.”