In Lake Ontario near Harbour Square Park, a cluster of 25 orange figures grasp onto floating inner tubes. From afar, the figures looks like real humans remaining perfectly still as the tubes bob in the waves. As people gather along the waterfront dock to take photos, you can hear whispers of “Are they real people?” and “What is this?”

It’s SOS (Safety Orange Swimmers), an installation from Boston artists Ann Hirsch and Jeremy Angier that was created to bring attention to the global refugee crisis. Each figure, which was cast from polyurethane foam, represents one million of the total number of refugees in the world. According to the United Nations High Commissioner for Refugees, there are currently 25.9 million refugees globally.

Since SOS was first shown in Boston’s Fort Port Channel Basin in 2016, the artists have added three more figures to represent the increase in refugees. 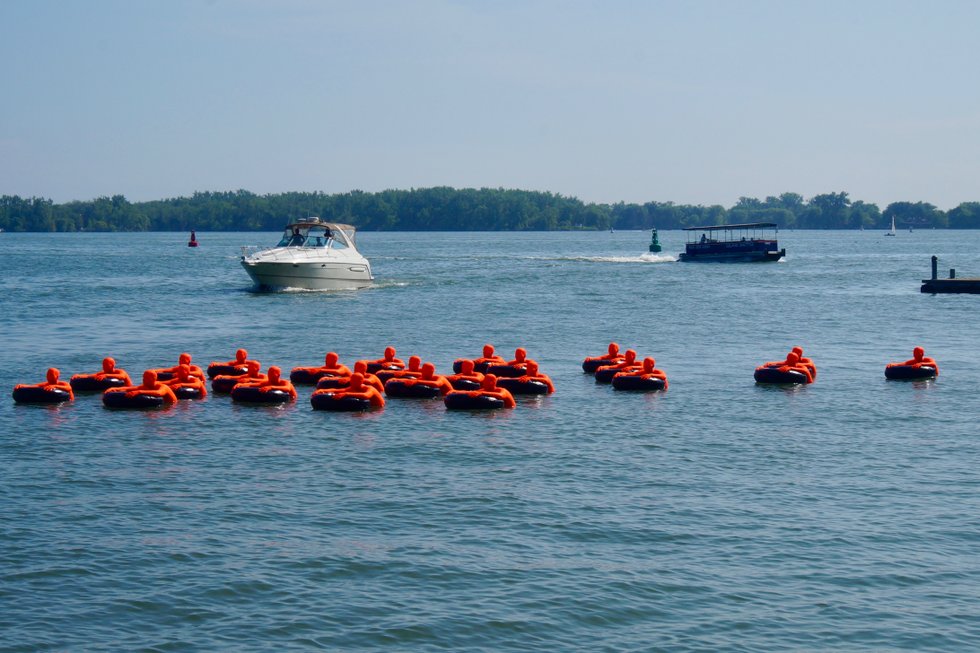 The 25 floating figures represent the more than 25 million refugees currently in the world.

“The Safety Orange Swimmers connect Lake Ontario to the seas crossed by all those in search of shelter, freedom and safety, evoking Toronto’s immigrant history,” say the artists in a statement.

The painted figures evoke the orange life jackets worn by many of the refugees arriving in Europe from Syria, Afghanistan and Somalia by boat. Harrowing photos have emerged of hundreds of thousands of discarded life jackets along the shores of Greece emphasize the crisis.

In 2016, Ai Weiwei covered the six pillars of the Berlin concert hall Konzerthaus with 14,000 life jackets from the Greek island Lesbos, to honour the the refugees that died at sea.

Presented by Waterfront Toronto, SOS will be in the Toronto harbour until September.