Hosted by the Black Wimmin Artist collective, the dining performance added a monumental moment to a long timeline of reclamation 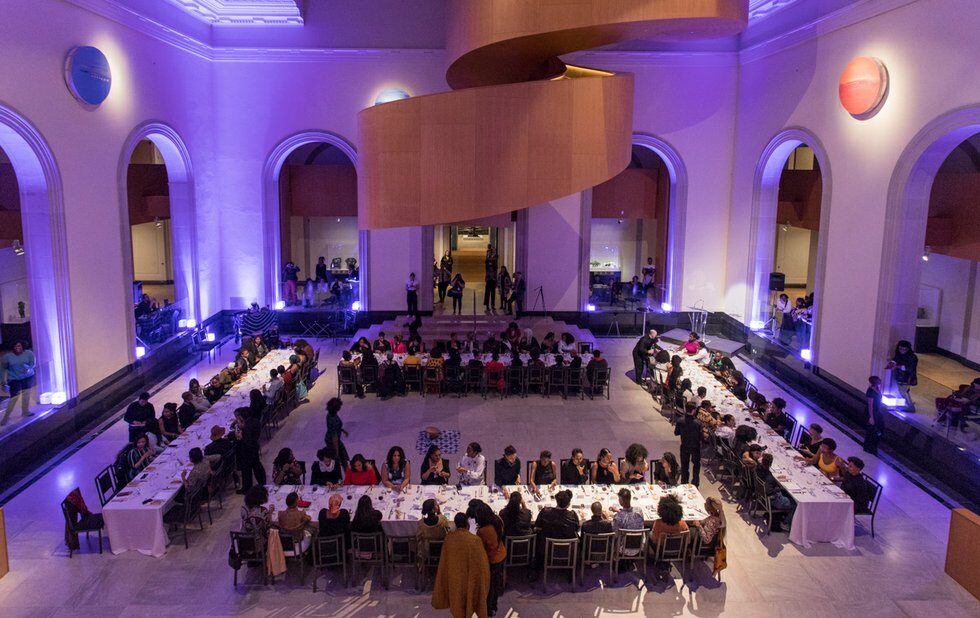 The Feast took over the Art Gallery of Ontario's Walker Court and commemorated the 30th anniversary of the first art show in Canada to feature exclusively Black women artists.

Roaring chants reverberated throughout the first floor of the Art Gallery of Ontario one Friday night as artist Anique Jordan demanded, “When are we going to have a major contemporary solo show by a Canadian Black artist in this institution?”

She stood in front of four long dining tables arranged in a square in the gallery’s Walker Court that seated 100 Black women and gender-non-conforming artists. They had come together on January 25 for The Feast, a dining performance that was about reclaiming space, honouring trailblazers and feasting on foods from the African diaspora: corn soup, Berbere-spiced chicken, rice and peas and more.

In Canada, Black women and gender non-conforming artists have always had to assert and defend their space in the art world. The issue is twofold: a lack of value placed on the artistic contributions of marginalized groups and a prevailing Eurocentric perspective that continues to inform whose art is exhibited in galleries and museums.

Hosted by art collective Black Wimmin Artist, The Feast was designed to combat those problems. By centering (literally in the middle of the museum) a group whose output is often relegated to the margins, Black women and gender non-conforming artists spoke out loud and clear. “We deserve to take up this space and be recognized in this space,” said Ojo Agi, an artist and AGO intern who participates in BWA.

Started in 2016 on Whatsapp by artist and curator Jordan, the group has become a virtual collective that connects, nurtures and champions over 150 Black wimmin artists, curators, critics, academics and social workers from Toronto, Montreal, Ottawa, Winnipeg and the U.S. It’s an ever-growing network including Najla Nubyanluv, Setti Kidane, Jorian Charlton, Amanda Parris and Huda Hassan.

While planning their first real-life meet-up, they conceptualized The Feast. Along with bringing together 100 artists spanning generations, they also commemorated the 30th anniversary of Black Wimmin: When And Where We Enter, the first art show in Canada to feature exclusively Black women artists, which was a country-wide exhibition organized by Diasporic African Womyn’s Art.

“In trying to ground the work we’re doing now in history, we learned about DAWA,” says Agi. “We’re making it clear that we’re not the first to do something like this.” 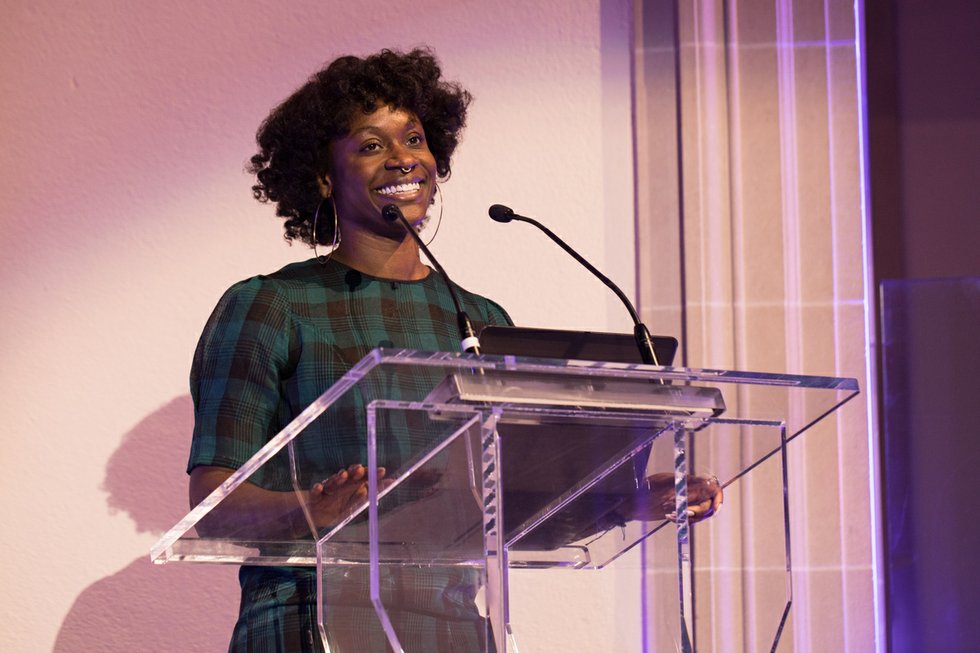 Anique Jordan, part of the collective Black Wimmin Artist, addresses the crowd at The Feast.

By hosting The Feast, the group added a monumental moment to a long timeline of reclamation.

One reason Canada’s art history has an erasure problem when it comes to the contributions of Black women and non-binary artists is an absence of documentation. As a result, those contributions are easily lost or forgotten.

“What does the Canadian populace see as important? Is it Black history? Is it Asian history? Is it Indigenous history?” artist and DAWA member Grace Channer says, adding that it’s an endemic problem.

DAWA’s seminal exhibition should be a part of Canada’s collective cultural memory. A collaboration between 11 different artists, it was a definitive moment of Black women doing it for themselves. They wanted to document it as well, but never received the funding needed to pay a writer – meaning if you didn’t see it in 1989, you might never know about it.

“We know there’s a glass ceiling but we haven’t even gotten to the floor level,” adds artist and DAWA member Buseje Bailey.

DAWA arose out of a need to address questions of access and inclusion and to challenge conventional museum practices. Those involved were already part of radical political groups and knew how to organize. Yet the obstacles they grappled with continue to impede subsequent generations.

After finishing a bachelor of fine art at York University in 1981, Bailey was encouraged to go to gallery openings to get her foot in the door. “I could walk in, walk around and walk back out, and no one would even notice I was there,” she recalls.

That invisibility is less likely now thanks to groups like BWA connecting more Black artists and arts workers. Artist Mosa McNeilly, part of both DAWA and BWA, says she feels “a momentum of Black womxn artists rising in the city right now.” 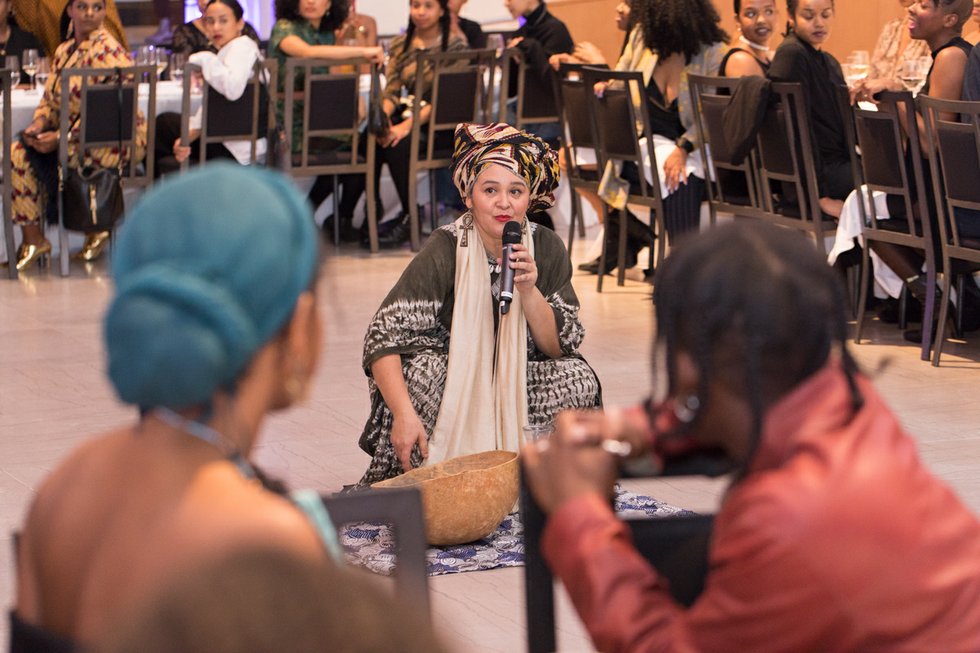 During The Feast, artist Mosa McNeilly honoured ancestors with a libation.

Progress has been glacial in terms of institutional representation and recognition, but there is power in numbers. The Feast was a testament to that. The night began on the fifth floor in Brooklyn artist Mickalene Thomas’s Femmes Noires solo show. After a group photo, the diners made their way to Walker Court as musicians playing djembe, conga and a balafon encouraged spectators to come watch.

Before the dining began, McNeilly poured a libation inspiring everyone to honour their ancestors as she gave thanks in many languages, including Yoruba, Xhosa, Zulu and Shona.

We live in the age of Instagram. Everything we do is documented in real-time, but Jordan emphasized the responsibility of the dozens of witnesses – some invited by BWA, others just visiting the AGO on a Friday night – who were watching The Feast.

“Your role is more important than those sitting,” she said. “You have the responsibility of remembering [and] keeping institutions like this accountable, so no one can say this didn’t happen.”