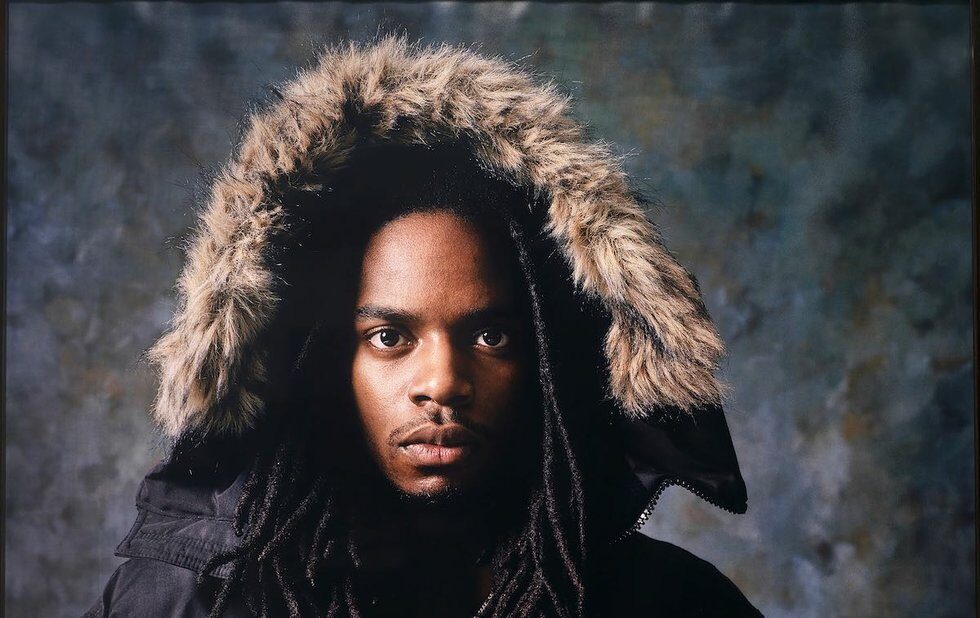 Courtesy of the Royal Ontario Museum

Blackness is not a monolith. It’s a phrase oft repeated by the community (and a likely contender for Paste Magazine’s next listicle: 6 More Things Black People Need to Stop Saying to White People in 2018).

The idea pushes back against the single dimension Black people are often boxed into. In popular depictions, that can mean an association with slavery and colonialism (see: films traditionally favoured at the Oscars). In the news media, it normally means an association with violence.

The Royal Ontario Museum’s Here We Are Here: Black Canadian Contemporary Art, which runs until April 22, pushes back against that narrow view. Taken together, the work of the nine artists “resists a definitive reading” (a phrase that’s a contender for 6 Things Critics Need to Stop Saying About Art Exhibitions in 2018, an imagined list if I can get around to writing it).

But in this case, the work actually does resist a clear-cut reading, and not for reasons of artsy obfuscation.

Housed on the museum’s third floor, the first piece to confront viewers is Dawit L. Petros’s Sign. Taken from the series Transliteration, the digital portrait captures a young Black man in a hoodie flashing a hand gesture. Is it a gang sign? The work nods to Albrecht Dürer’s Self-Portrait At 28. Google it. You could also read Dürer’s pose as a gang sign. But you won’t. The white artist’s Christ-like appearance isn’t automatically associated with gangs the way Petros’s subject is. Dürer’s gesture is often read as a blessing. Imagine the challenge to anti-Black racism if a young Black man in this society, regardless of what he’s wearing, was read as a blessing too.

In his positive review of the exhibit, Toronto Star art critic Murray Whyte described the oral gesture as “a sharp, unnerving hiss… a culturally shared gesture of disdain among Africans and their broad-ranging diaspora alike.”

It’s a florid description of sucking teeth that elicits my sucking of my own teeth. The gesture loses something of its subversiveness when it has to be explained to a non-Black audience.

Particularly as it is, according to Clarke, a coping strategy the community adopts in the face of daily experiences of micro-aggression.

“We don’t tend to show our frustration or irritation openly to white people, because we have learned through experience that it’s dangerous to us,” she says. “So we often police our response to anti-Black racism to make white people comfortable, because if they’re uncomfortable we pay the price.”

By exploring gestures not easily read, or all-too easily misread, by non-Black communities, much of the work in Here We Are Here resists the idea that viewers will walk away with a grasp on Black Canadianness. It’s an ironic stance for an exhibition housed in a museum, a traditional incubator of cultural knowledge. It’s also wonderfully subversive: when an identity is too encoded to read, it’s impossible to confine it to a limiting narrative.

Other pieces in the exhibit work in a similar vein: the carefully-constructed pose struck by Gordon Shadrach’s inscrutable and self-fashioned subject in the acrylic painting In Conversation the coded poses of Charmaine Lurch’s female figure in the charcoal series Being, Belonging And Grace and Esmaa Mohamoud’s wearable sculpture, Untitled (No Fields). A commentary on football athletes taking a knee as a form of protest, the piece features shoulder pads affixed with a contradictory symbol: a cape of chains.

In 2016, the ROM apologized for Into The Heart Of Africa. The 1989 exhibition told the story of Black Africa through the lens of white Canadian missionaries and soldiers. It was meant to be a critique of 19th-century colonial attitudes. Instead, it was experienced as a glorification of racism. The Black community took to the street in demonstrations that ended in violent encounters with police, arrests and criminal charges.

Initially, the museum defended the show. In the face of the Black community’s concerns, the curatorial stance was one of a “top-down ‘we-know-how-to-do-it-and-you-don’t’ attitude,” as writer John Armstrong put it in a 2016 NOW article detailing the controversy.

Thirty years on, Here We Are Here presents the diverse experiences and disparate histories of Black Canada through the work of artists from the Black diaspora and helmed by two Black curators, Julie Crooks and Dominique Fontaine, who worked with Silvia Forni, the ROM’s curator of African arts and cultures.

In other words, by stepping aside and letting the community tell its own stories, the ROM has finally got it right.