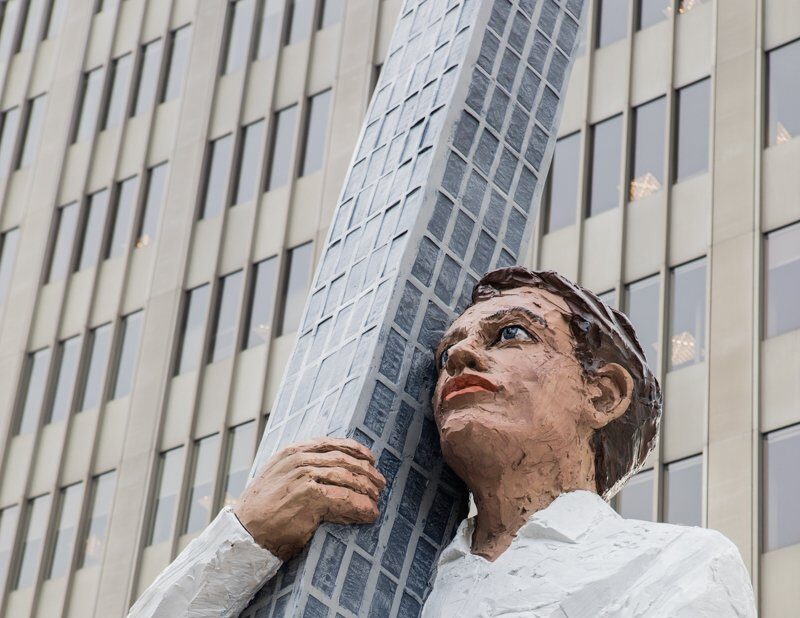 It was always going to be controversial. A 25-foot-tall sculpture of a man cradling a condo, standing on multi-coloured cubes. Commissioned by the developer Camrost Felcorp and made by celebrated German artist Stephan Balkenhol, Toronto Man (2019) is one of the city’s newest public artworks. It got a mixed reception when it was unveiled in August.

Balkenhol spends his time living between Meisenthal, France and Karlsruhe, Germany, where he teaches at the Academy of Fine Arts. He’s been a commanding presence on the European art stage for decades, and the work is the sculptor’s first commission in North America.

NOW spoke with Balkenhol by email over a number of weeks this fall. His comments made clear why he thinks his work has sparked dialogue: The sculpture is just a pretext for a conversation Toronto needs to have with itself about rapid development in the city.

Located at 101 St. Clair West and facing the street, the work is part of a three-condo development complex on the site of the former Imperial Oil building. It has provoked consternation ever since it went on display: here is the invasion of the city by developers made literal. Is the artist mocking us? Toronto Man inspired a social media debate, with one Twitter user noting that it represents “a certain class dominance over the society that is supposed to be diverse and multicultural.” It’s a fair summation of the ambivalence the work has prompted.

Toronto Man is big. At 25 feet in height, it’s not at human scale. When asked how he decided on the size of the work, Balkenhol called the sculpture “big, but not too big.

“The location on the street in front of the high buildings demands a certain height of the sculpture,” he said. “It was meant to be a kind of landmark and should be perceived [by] the people driving on the road as well for those who walk by.”

The rough-hewn surface of Toronto Man is characteristic of Balkenhol’s practice. Using a carving style that dates back to the Middle Ages, he hacks and chisels his figures out of single blocks of wood. Casting the figure in bronze and adding a coat of paint is the artist’s contemporary update on this tradition. At the same time, the rustic look conveys a message about the technique’s medieval origins.

The figure of a standing man wearing slacks and an open collared shirt often recurs in Balkenhol’s work. A Twitter comment noted that Toronto Man has “a Soviet messianic look in his eye.” Is the figure some kind of new New Soviet Man? Or, more likely, John Galt, the libertarian architect hero of Ayn Rand’s 1957 novel Atlas Shrugged? In the book, Rand conflates architecture with a maverick world-building that cares not for the destruction it leaves in its wake. Torontonians could be forgiven for feeling that developers are equally disruptive, given the impact of condo development on city life.

But this reading falls short of seeing the sculpture as a whole. The cubes at the Man’s feet are as important as the building he is holding.

Who exactly is Toronto Man? “This guy in Toronto is a nobody in an everybody – he could be you,” says Balkenhol. “This sculpture invites you to take his place and hold the tower [while] standing on the coloured cubes.”

The cubes are a decisive detail. On a traditional sculpture, the pedestal separates the viewer from the figure it represents. The base of Balkenhol’s work suggests a more playful invitation.

That said, Balkenhol makes clear that seeing the man as a developer is not a misreading.

“I don’t want to illustrate stories but invite people to invent some by looking at my sculptures,” he says. “I do make proposals but don’t tell a story myself up to the end.”

Vice writer Mack Lamoureux couldn’t decide if the work was intended as a celebration of developers’ hold on the city or as an indictment of it. Is the “sculptor shitting on the developers for gentrifying cities by putting up some ‘luxury condos,’” he asks, while conceding “there’s also the real possibility that the developers are in on the joke.”

Balkenhol said in a 2014 interview: “It is the viewer who fills it with meaning. Astonishingly enough, many beholders can hardly bear this ‘openness.’” 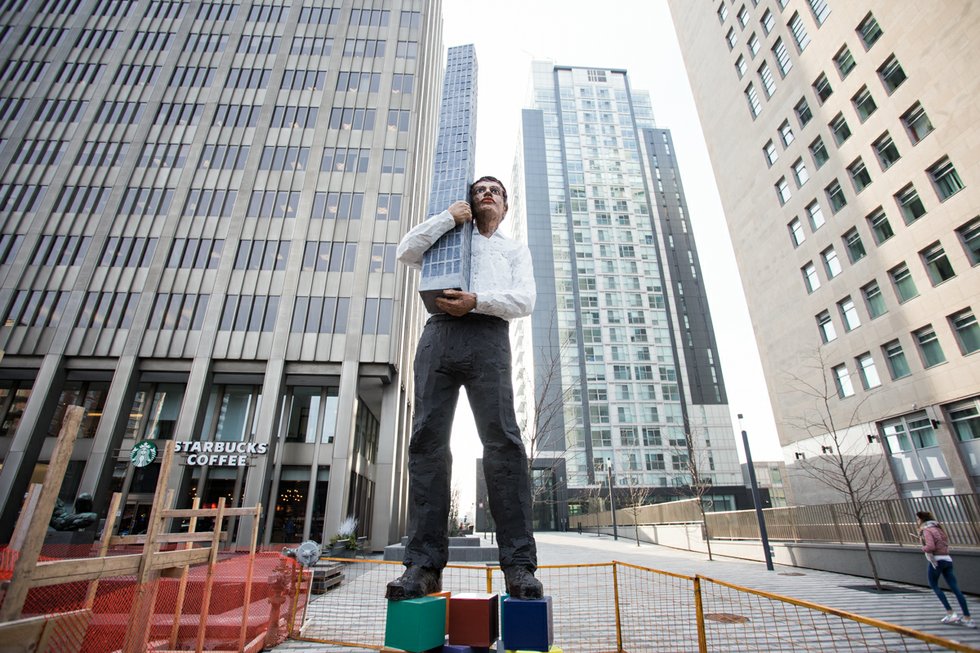 In the last decade, Toronto has been utterly changed by condo development. The skyline is more glossy, the population is bigger and rental prices keep going up. All of this is rolled up into one big, 21st-century package of globalization.

The Yonge + St. Clair BIA is also pushing to raise the profile of the neighbourhood and make it more of a destination. Public art is a big part of the strategy. Other recent projects include an eight-storey mural by Sheffield, UK street artist Phlegm and the pop-up Tunnel of Glam, an 80-foot long tunnel of sequins running to January 6.

More broadly, the city has a policy that requires a percentage of large-scale development projects go toward public art. Until Toronto Man, no public work has been funded through that program while overtly commenting on the city-building phenomenon that made it possible. Toronto Man bears the heavy weight of Toronto’s new lived reality on its sturdy, capable shoulders.