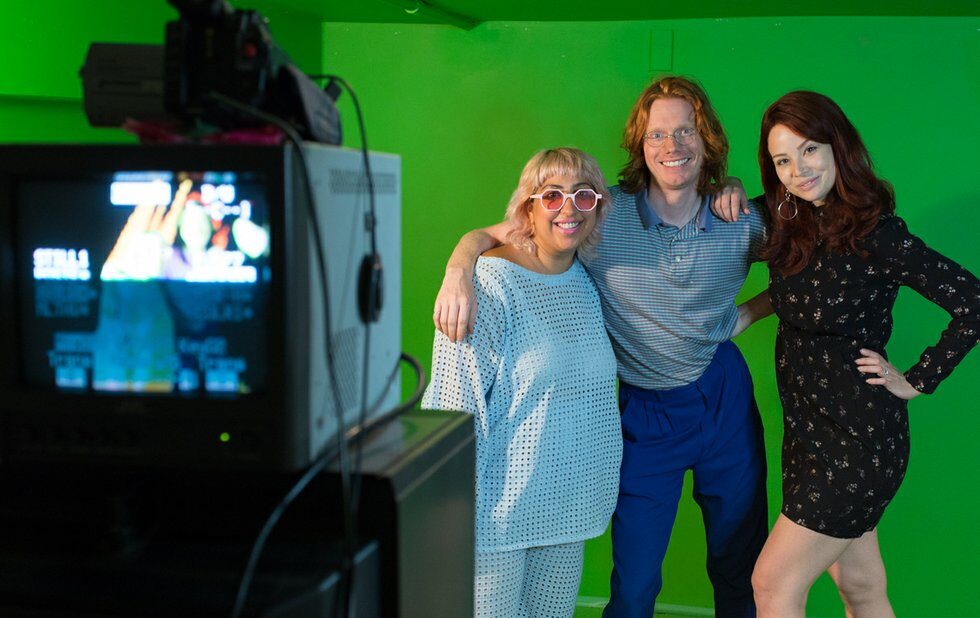 Crammed inside the jam-packed rooms, low ceilings and brightly painted walls of a basement apartment, the BUMP TV studio is buzzing with activity.

Like Wayne’s World or Weird Al Yankovic’s UHF, this public-access online station offers anyone the chance to create the shows of their wildest dreams. Tuning in any time of day during the network’s 24/7 broadcasting at bumptelevision.com, you might see music videos, dating profiles, birdwatchers or artist Maddy Matthews slicing food with a broadsword.

With the camcorder aimed at a green screen to project performers onto VHS-grade backdrops, BUMP’s aesthetic is far from slick. Yet this lo-fi simplicity only heightens the station’s charm, smashing the screen between viewers and stars. Focusing on non-established artists, they proudly operate with a 100-per-cent volunteer staff.

As the BUMP website explains, “Anyone can submit original content or make a show in our Toronto studio.” No credentials, skills or experience are necessary, and all submissions will be aired (as long as they aren’t offensive or hateful).

In recent weeks, the station’s crew has been busy making papier-mâché props for the upcoming BUMP TV Fund Run Spectacular telethon, which also serves as the launch of their Patreon.

Broadcasting from the Toronto Media Arts Centre, this live game show will find three teams of local artists pretending to run a marathon in a psychedelic cartoon world. Viewers can phone in to donate money to BUMP, which will provide advantages (or disadvantages) to their chosen competitor. These range from catching a ride in an Uber to being chased (or carried) by a cheetah. There’s even a cauldron of slime ready to be dumped onto the head of the telethon’s host in the classic tradition of You Can’t Do That On Television.

BUMP began as the brainchild of artist and comedian Tom Hobson. Attempting to break into the world of TV writing, he penned spec scripts for shows like Brooklyn Nine-Nine and Schitt’s Creek, yet found the process “discouraging, lonely and boring.”

A visit to New York City’s 8-Ball Community, which runs a public-access TV station among its various projects, gave Hobson the inspiration he needed to take things into his own hands.

“No shade on people who do the screenwriting grind, but to me it felt formulaic and not fun, like homework,” he laughs. “Even if you get really good at writing jokes for Eugene Levy, you’re probably not going to get a show, statistically speaking. And if you do get a job, you might get three words in a Schitt’s Creek script after years of work. I want to make things now. I don’t care if there’s a big production crew helping out or if the sound is good.”

It turns out other people share those opinions. Alongside Hobson’s partner Halloway Jones, who leads the band Baby Cages, the BUMP board of directors has grown to include nine members. These include Life of a Craphead’s Jon McCurley, video artist Peter Rahul and stylist Anum Peerzada. While they all wear multiple hats, from filming to editing to sweeping up the studio, they also share a common desire for DIY independence.

“I had just moved to Toronto and wanted to be part of BUMP because it felt fun and creative,” explains Peerzada.

“I liked their energy. Both of my parents are actors, so I’ve been doing this since I was a kid. When I got to Canada I didn’t know where to put my energy. I applied for so many film jobs and never got any space to do anything. After I discovered BUMP, I borrowed some costumes and props and just got started.”

Beyond offering lessons in how to edit video with a donated desktop computer and Adobe Creative Suite, BUMP provides an invaluable service to musicians. Artists including Ice Cream, Scarlett Rose, and Dorothea Paas (who will also participate as a runner in the telethon) have all used the station’s green-screen facilities to create eye-catching videos.

The station has hosted an annual Oscars-style award show called The Bumpies, broadcast live from events such as Long Winter, Bit Bazaar and Blackout Eid, and plans to do more with the support of viewers like you.

“Our aim is to lift people up and help them showcase their work somewhere fun,” says Hobson. “BUMP TV serves as an ongoing document of what’s going on in Toronto, including music, videos, performance, art and comedy. We want to grow and expand our community, but the thing I care most about is longevity. Our dream is to have a news van to report live, if anyone wants to buy it for us. We’ll show up on the TIFF red carpet with a papier-mâché microphone.”