In a first, Inuit art takes over the AGO’s largest gallery space 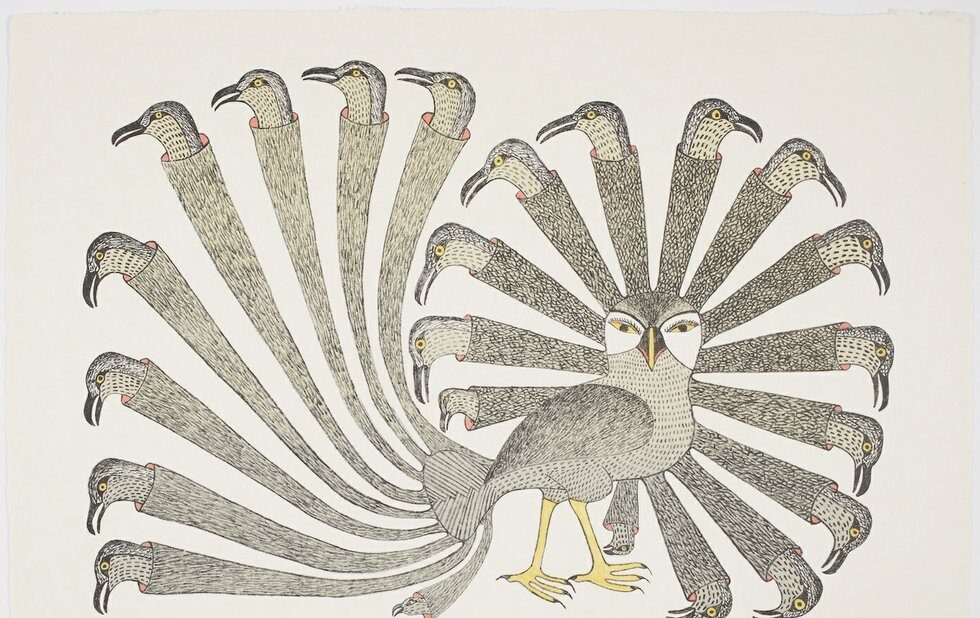 Bountiful Bird, a colour lithograph on paper from 1986 by Kenojuak Ashevak.

This summer, for the first time ever, the Art Gallery of Ontario’s largest gallery space will exhibit Inuit art.

Titled Tunirrusiangit, which in Inuktitut means “their gifts” or “the gifts they gave,” the show features the work of Kenojuak Ashevak, considered the grandmother of Inuit art, and her nephew Tim Pitsiulak.

And in another AGO first, the majority of the curatorial team is Inuit. Along with the AGO’s Georgiana Uhlyarik and York University professor Anna Hudson, the exhibition is curated by four contemporary Inuit artists: performer Laakkuluk Williamson Bathory, curator Jocelyn Piirainen, sculptor Koomuatuk Curley and writer Taqralik Partridge. The four curators selected the 111 career-spanning works by Ashevak and Pitsiulak on display.

Born in 1927 in Ikirisaq on the south coast of Baffin Island, Ashevak is known for her surreal renderings of birds and northern wildlife, like The Enchanted Owl (1960), a stonecut print of a red and black owl with speckled wings, and Bountiful Bird (1986), a pencil drawing of a bird with plumage made of seagull heads.

Ashevak was made an officer of the Order of Canada in 1967, won the Governor General’s Award in Visual and Media Arts in 2008 and, following her death in 2013, was memorialized in a Heritage Minute in 2016. She influenced her nephew Pitsiulak (who died in 2016) to become an artist.

Tunirrusiangit is the first major retrospective of Pitsiulak’s work. His vivid, colourful drawings using pencil crayons, pastel and ink depict modern life in Nunavut: polar bears splayed across black ice a GoPro taking a photo of two walruses and heavy machinery, a nod to the rigorous process of building houses in the Arctic. In one titled Computer Generation (2012), he depicts an Inuit boy with his head hooked up to a laptop. 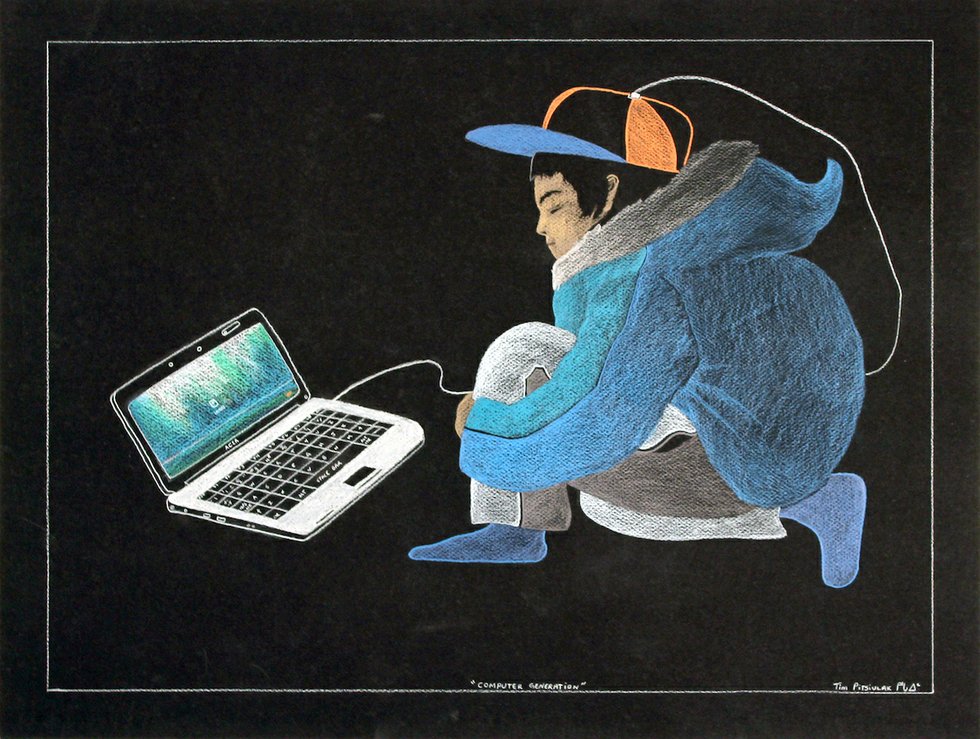 Computer Generation, a coloured pencil drawing from 2012 by Tim Pitsiulak

One of Pitsiulak’s most stunning pieces is a massive eight-by-12-foot penciled drawing titled Swimming With Giants (2014), which offers an overhead view of a pod of whales swimming with belugas in shimmering turquoise waters.

The AGO also commissioned three of the Inuit curators to create original pieces to accompany the show. “We wanted to shake up some people’s somewhat cliché ideas of what Inuit art is,” says Gillian McIntyre, the exhibition’s interpretative planner. “We want to give Kenojuak Ashevak her due honour, but how can we show it in a contemporary, fresh way?”

Upon entering the exhibition, you’re enveloped in a stirring soundscape and an ever-changing video projection. Iqaluit-based artist/performer Williamson Bathory created the piece, titled Silaup Putunga, in collaboration with cinematographer Jamie Griffiths and vocalist Celina Kalluk. In the video, Williamson Bathory performs uaajeerneq, a type of Greenlandic mask dancing, in an Arctic landscape filmed outside of her cabin.

“[Uaajeerneq] is an ancient art form that both predates Christian times and is a direct response to and reprieve from colonialization,” explains Williamson Bathory. “It’s an improvised performances that focuses on the celebration of sexuality and on the need for a sense of humour as social glue.”

Partridge built a qarmaq (a traditional sod house) plastered in archival newspaper articles, mostly from the New York Times, about the north. She wanted to show how the media has historically reported on Inuit people using racist language. (One headline reads: “Eskimo flappers like cigarettes”.)

Throughout the exhibition, you’ll also hear interviews conducted by Curley (who is Pitsiulak’s nephew) with Ashevak’s daughter discussing her mother’s legacy and love of fishing, and with Pitsiulak’s sisters, who speak about his childhood in Nunavut and their family’s history with hunting.

Tunirrusiangit beautifully showcases the legacy of these trailblazing Inuit artists while opening a door for the next generation pushing modern Inuit art forward.

“In many cultures, including in Inuit cultures, you don’t really ever leave. You don’t die in the forever sense,” says co-curator Anna Hudson. “Through the exhibition, the spirit of Kenojuak and Tim is with us. You can feel it. The idea of intergenerational connectedness is why we need to recognize the young people coming up.” 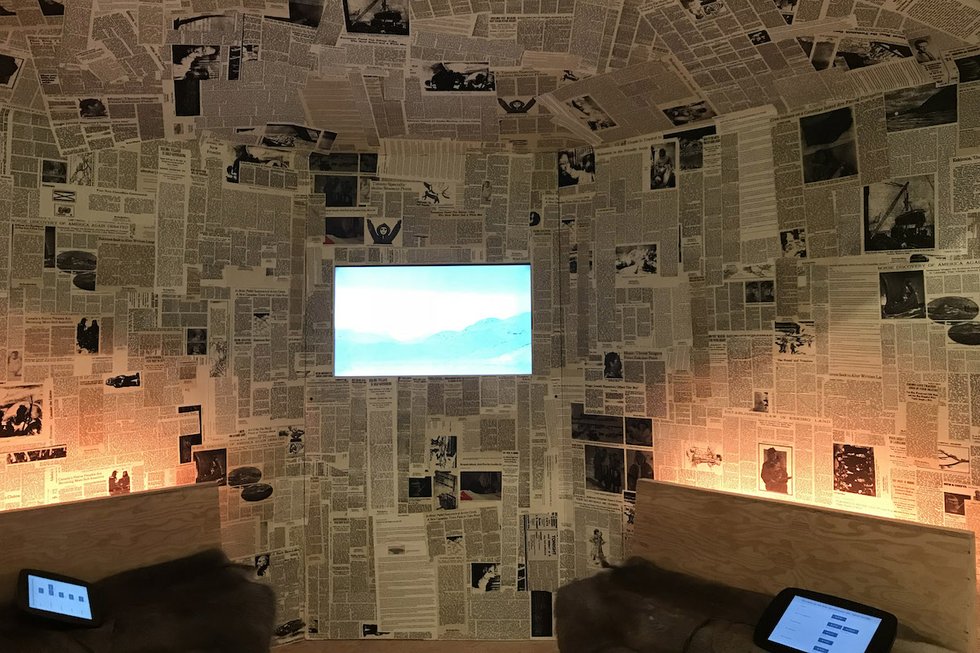 Taqralik Partridge built a qarmaq (a traditional sod house) plastered in newspaper articles about the north in order to call attention to the language of the past.