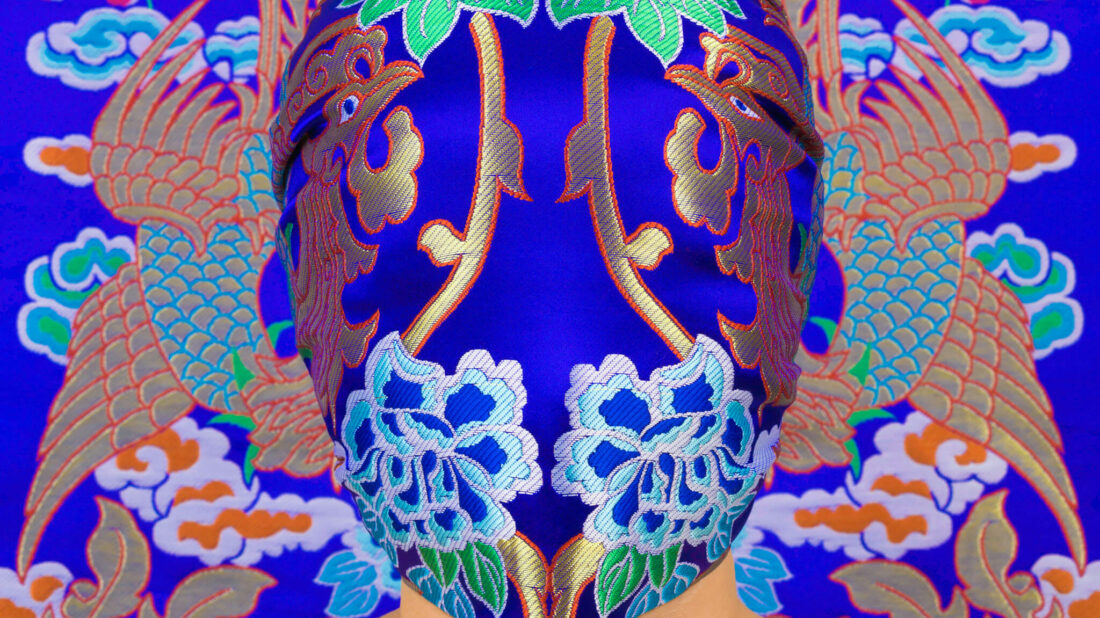 Nuit Blanche is a bit different this year.

In light of ongoing COVID-19 health and safety restrictions, the city has moved the all-night art event online. Instead of crowds descending upon Yonge-Dundas Square, clamouring for massive art installations, everything will be accessible through a computer, smartphone or tablet.

Artistic director Julie Nagam‘s curatorial theme, The Space Between Us, is two years in the making, but could not be more fitting for the current moment.

It considers how people build bridges between communities, cultures and the environment. The works examine the different ways we connect, gather and learn from each other. Connections between disparate locals as far as the polar regions of the Inuit, the pacific coasts of the Maori and the urban landscapes of Toronto are explored.

A new series called Nuit In Your Neighbourhood lets viewers use their smartphone or tablet to see artworks rendered in three-dimensions via augmented reality and virtual reality – wherever their camera is pointed.

That means people can still get outside to experience the art without being clustered together in the downtown core.

Imagine the colourful traditional silk designs of Chun Hua Catherine Dong’s Skin Deep displayed in the middle of an alleyway or on the facade of a neighbourhood corner store.

For the video works, a 12-hour livestream will cycle through the different experimental films, screen-based artworks and archival images.

Nuit Podcasts and Nuit History help to round out the programming. The podcast delves deeper into the curatorial theme with discussions about cultural belonging, international relationships, the impact of colonialism on the land and more.

Nuit History is a look into the previous 14 years of the event. The archives will open up to highlight 1,600 past works like Ai Wei Wei’s 2013 massive bicycle sculpture in Nathan Phillips Square.

Here are the can’t-miss virtual exhibitions for Nuit Blanche 2020:

In 2012, Monnet sailed across the Atlantic from Amsterdam and documented her 22-day voyage on a mini DV camcorder. The trip became an opportunity for her to critique the colonial, industrial and economic interchange between Canada and Europe as an Indigenous woman. Growing up on both sides of the ocean (Outaouais, Quebec, and part in Brittany, France), Monnet is particularly positioned to scrutinize the historical connections between both lands. The journey she makes was made by the countless ships that landed on the shores of so-called Canada and started the European colonial project.

Yung Yemi’s When The Fam Lose Faith, Hold Them Up

Yung Yemi – When The Fam Lose Faith, Hold Them Up

Toronto-based multidisciplinary artist Yung Yemi, aka Adeyemi Adegbesan, is known for his Afro-futurist portraits, photography and wearable adornments that call back to his ancestral cultures. His work was most recently part of the 25th Kuumba festival at Harbourfront Centre in February. For Nuit Blanche, he created a series of works about the Black family unit and the necessary interconnectedness between Black families to create new modes of support and mutual aid.

Arcand’s most recognizable works are her neon signs of declarative statements in Plains Cree syllabics. The photo-based artist and industrial sculptor translates signage into her mother tongue, a language she was robbed of and disconnected from through forced assimilation. Never Surrender is her latest work in this vein, translating lyrics from Corey Hart’s 1980s pop song. She undeniably asserts the presence of Indigenous language on urban landscapes with hot pink syllabics. Through this process, Hart’s lyrics become an anthem of Indigenous sovereignty.

Dong’s unconventional self-portraits are draped in renderings of traditional Chinese silk fabrics. She is challenging notions of shame, social control and cultural harmony. In China, saving face is of the utmost importance to avoid humiliation and disgrace. She masks herself with silk as a performance of submission to the culture of shame. In bowing to the status quo, she strips herself of her individuality and comments on her lack of autonomy growing up as young girl in China.

The Iranian-Canadian performer and artist has created an immersive tableau that shines a light on self-immolation in the Middle East and Persian-speaking countries. The rampant practice involves young women looking to escape threats, domestic violence and forced marriage. These are the stories of the survivors, women who lit themselves on fire as a protest against the injustice of their lives. The interactive piece imagines a new future of their own making.

Eight works by 20 Maori and Pacifica artists from across Aotearoa (New Zealand) come together in this collaborative multimedia exhibition. Curated by Rachael Rakena and Mike Bridgman, the video art is all streamed within an immersive 3D waterscape. Digital sculptures, 360-degree films and short videos contemplating themes of well-being, balance and healing speak to the relationship humans have with water and the need to conserve the world’s oceans.

Turner likes to play around with mediums. She works in all different kinds of media and performance art. Her latest venture is a narrative short about Gloria Smith, a time traveller going back to stop the Transatlantic slave trade. Smith encounters two African travellers on her journey who have the weighty decision of whether to help her or rupture the space-time continuum in their hands. Turner is exploring Canadian and diasporic identity and contextualizing the Canadian involvement in the slave trade.

A still from Hannah Brontë’s STILL I RISE

Australian artist Brontë creates her own new world order with this hip-hop performance piece. Still I RISE imagines a future Australia with an Indigenous woman as prime minister, backed up by an all-female parliament. Multiple performers play characters that are resisting dominant and colonial restrictions on what the future can be.

The first examines different kinds of migration with artists Niro, Duke Redbird, Cheryl L’Hirondelle and Michael Belmore. The second explores the role of colonialism and slavery in the establishment of cities. The third is a discussion between Monnet, Yemi, Director X, Amrita Hepi and Eleh on memory and belonging and connecting to new ideas of home.

The other seven episodes will air monthly throughout 2021.