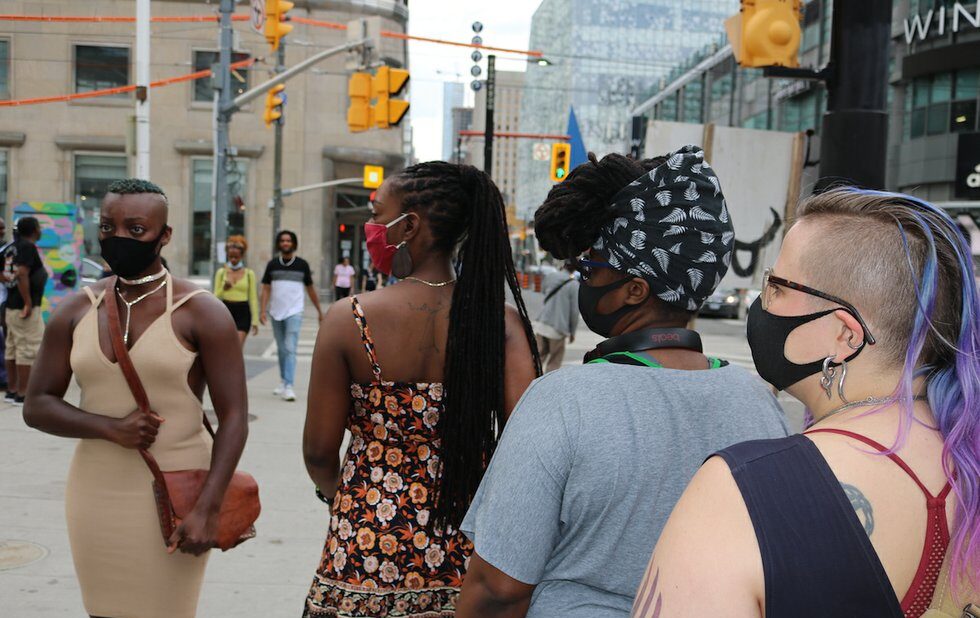 Two of the most talented, fearless queer artists – Monica Garrido and Augusto Bitter – host this Queer Youth Cabaret, a virtual event featuring eight exciting 2SLGBTQIA+ artists aged 14 to 30. This collaboration between Buddies and Soulpepper will be one of your first opportunities (and probably not your last) to watch people like Kemi King, Isi-Bhakomen, Shaharah Gaznabbi and Sofía Rodríguez burn up the stage and challenge our ideas of queer spaces.

After the last three months, we all need a good laugh. And thanks to host/producer Maggie Cassella, some of the continent’s funniest people are going to make that happen. Cassella’s assembled a who’s who of the queer -comedy world, including Lea DeLaria, Gavin Crawford, Martha Chaves, Carolyn Taylor, Karen Williams, Kate Rigg and Brandon Ash-Mohammed, with appearances by Colin Mochrie, Deb McGrath and Andrea Martin to boot.

The stage devoted to Indigenous and Two-Spirit talent returns as part of the official Virtual Pride program. The lineup has yet to be announced, but Catalyst tends to showcase an eclectic mix of musical styles for those looking for a music event that isn’t solely focused on club sounds.

In this outdoor performance (masks and physical distancing are suggested for audiences), Nickeshia Garrick and Jillia Cato play two women who are all set to meet after months of online dating… except now there’s COVID-19 to deal with. Directed by Rhoma Spencer, who created the piece with the two performers, this lockdown love story by the Canadian-Caribbean Arts Network should resonate with anyone who’s questioned the logistics of swiping right over the past few months.

June 27 at 8 and 9 pm, at the corner of Shuter and Sackville, buddiesinbadtimes.com

If you’re looking for a contemporary queer midsummer night’s dream, this multimedia offering involving fairies, fireflies and disco ball unicorns should do the trick. Directed by Raymond Helkio and featuring Dayon Mboya Monson, with contributions by Keith Cole, David Bateman and Stewart Borden, this outdoor show – performed in a garden – should enchant everyone.

June 27 at 9 pm, at the corner of Pape and Bain (will also be live-streamed), buddiesinbadtimes.com

The organizers behind Alternative Pride are taking their after-hours vibes coast-to-coast with party/fundraiser for Black Lives Matter-Toronto and the NGO Water First. The night kicks off in St. John’s with DJ Axel Sundelin, before heading west. B’UGO will hold down the decks in Montreal, Fawn Big Canoe will rep Toronto and the party finishes in Vancouver with regularfantasy.

Pride Weekend will not be without protest. The No Pride in Policing Coalition is hosting a rally in solidarity with the group Afro-Indigenous Rising, which has been occupying Nathan Phillips Square since June 19. U of T prof Beverly Bain and activist/journalist Desmond Cole will speak about defunding the police and participants are asked to bring masks and practise physical distancing – or watch the event online if feeling sick.

The annual block party spotlighting Black queer and trans talent was supposed to happen over two days this year. This scaled-down online version is going big on DJs, with a lineup heavy on Blocko mainstays, including DJ Blackcat, Nik Red, Tamika and Craig Dominic. There will also be a handful of performances between sets.

Good Grief: Queer And Trans Reflections On The Edge Of Survival

Some of the most exciting recent works have come out of Buddies’ Emerging Creators Unit, a development series highlighting fresh and bold queer -voices. This year’s event, simulcast on social media and produced with b current and led by its artistic director Catherine Hernandez, features Gabe Maharjan and Merlin Simard’s solo works about the intersection of love and money – something that’s especially relevant since we all went on lockdown.