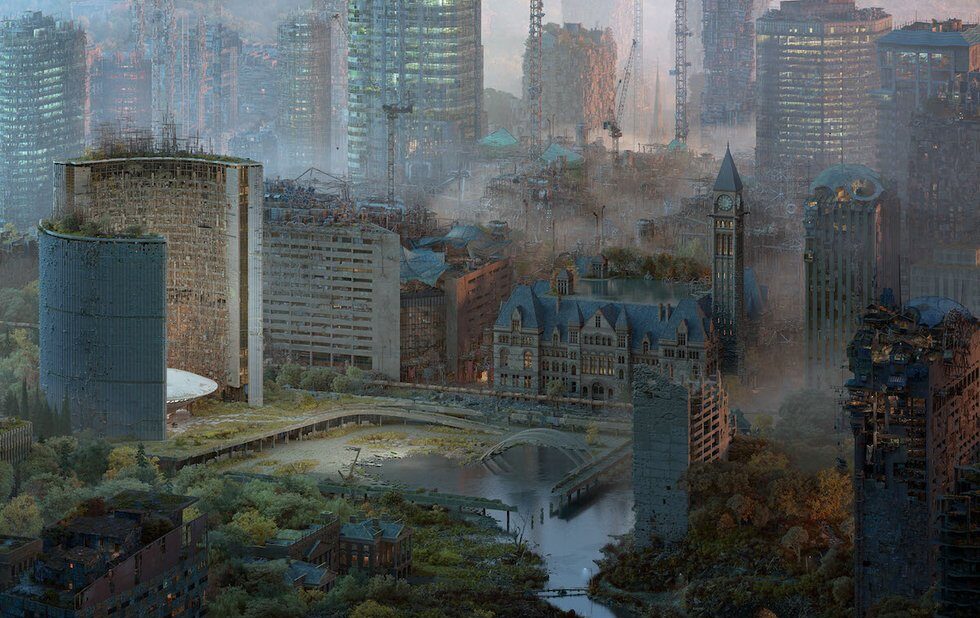 Imagine walking through Nathan Phillips Square and it’s barren of city life. The traffic along Queen Street is silenced and very few people, if any, are to be encountered. The emptiness amplifies the sound of crickets, and the absence of electricity makes a canopy of stars visible in the sky. Vegetation breaks through decaying concrete and, all around you, nature has taken over.

This is director Lisa Jackson’s vision for a future Toronto, and it’s one that viewers will be immersed in when the interactive VR experience Biidaaban: First Light makes its Canadian premiere at Nathan Phillips Square from September 18 to 24.

The experience delivers quite the contrast as viewers are invited to step from the bustle surrounding City Hall into one of five stations outfitted with VR headsets, which transport you into the virtual space. From there, you navigate the environment via gaze-based interactions.

Biidaaban is an Anishinaabemowin word that means “the first light before dawn.” It also points to a non-linear view of time where the past and future collapse into the present. Within this framework, Jackson calls forth the original languages of the place first known as Tkaronto – Wendat, Anishinaabemowin and Kanien’keha – and restores their central place in this imagined future.

“Biidaaban is a projection of Indigenous values as alive, relevant and important for a future Toronto,” says Jackson, who envisioned the story and served as creative director. “In the media, there’s often this sense of Indigenous culture being in remnants, kind of limping along. But there’s much more depth available, and when you talk to the elders it starts with the language.”

Biidaaban was created by Jackson in collaboration with 3D artist Mathew Borrett, digital design and production agency Jam3 and the NFB’s Digital Studio. It’s a sister project to a larger multi-media installation Jackson is working on called Transmissions. In both, she explores the power of Indigenous languages and honours their ability to shape more relationship-oriented ways of thinking and being in the world.

Language underscores a deep connection to place in Biidaaban, and Jackson finds an analogy between it and the natural elements that are depicted as re-emerging into the city. She speaks of Indigenous languages as emerging from the land itself. They were spoken in Tkaronto for thousands of years, she says, and are as native to the place as the plants and trees.

Later when Jackson mentions a friend’s father, who is a key figure in the revitalization of Kanien’keha, and her excitement at hearing speakers talking in their native languages when she did a special screening of Biidaaban at Six Nations, the analogy gains a deeper resonance.

That same friend, fellow filmmaker Zoe Hopkins suggested that Jackson use the Thanksgiving Address, a sacred Haudenosaunee prayer, which comprises the primary spoken text in Biidaaban.

“From a traditional perspective, every time more than three people gather they have an obligation to give thanks for all the elements of creation,” explains Jackson, who received approval from members of Six Nations to use the prayer, including depicting parts of it as written when some believe it should only be recited orally.

When the Thanksgiving Address is recited, speakers are aligning themselves with the natural world. While Biidaaban’s abandoned Toronto might call to mind a post-apocalypse, it’s this element that sets it apart from other work that falls more squarely into the genre. In post-apocalyptic stories, protagonists are usually depicted as struggling against their environments rather than co-existing peacefully within them.

During Biidaaban’s debut at the Tribeca Film Festival in April, viewers were so used to the post-apocalypse paradigm they thought they were experiencing it incorrectly.

“There was this interesting cognitive dissonance happening because their cultural training taught them that this is supposed to be a bad future they were expecting a zombie to jump out,” says Jackson. “But most people find the experience of Biidaaban to be beautiful, moving and meditative.”

Indigenous culture and symbolism is woven throughout the environment, from allusions to Sky Woman and Grandmother Moon to nods to traditional modes of transportation. In one environment, an upturned canoe on the Osgoode station platform suggests its use in place of trains in the flooded subway systems.

While these elements are subtle and powerful, Jackson would rather viewers trust their own personal experience of Biidaaban rather than look for one interpretation.

“With VR, we have the ability to put someone in a space that is so rich and full of meaning but without being directional about what they should take away from it,” she says. “I would rather people leave with questions and self-reflection.”