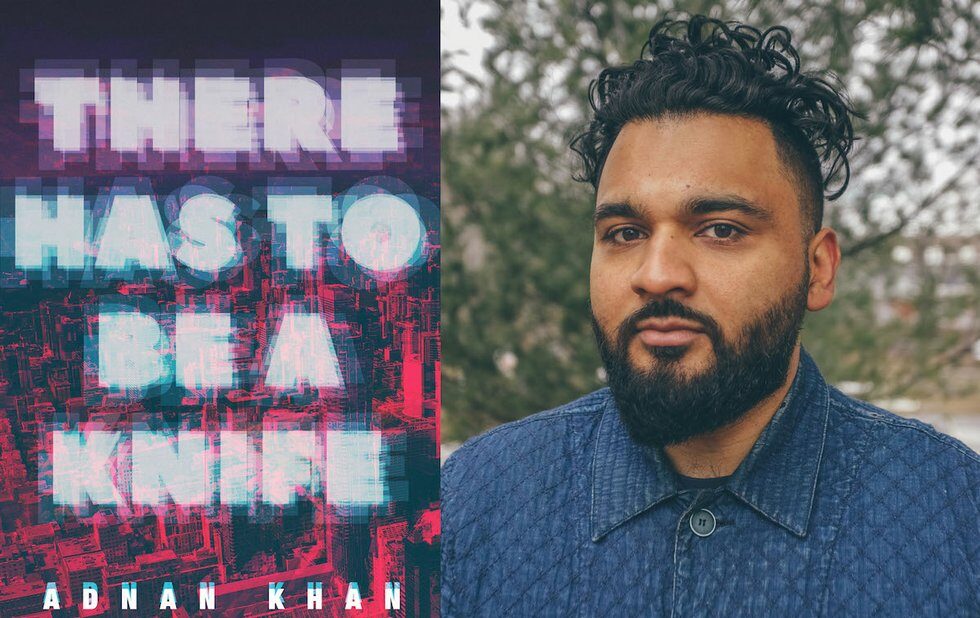 ADNAN KHAN launch for THERE HAS TO BE A KNIFE on Wednesday (October 2) at Unlovable Bar (1415 B Dundas West). 8 pm. Free. festivalofauthors.ca.

Adnan Khan’s debut novel, There Has To Be a Knife (Arsenal Pulp Press, $18.95, 224 pages), is a nuanced look at how trauma and masculinity converge in relationships. Omar Ali receives a call notifying him of his ex-girlfriend Anna’s suicide. He spends the following weeks unravelling as he searches urgently for the note she must have left him (but that her father insists does not exist), breaking into homes and posting extremist messages on Reddit.

Through short and succinct sentences, the novel explores suicide and depression, intense longing for intimacy, racism and the relationship between violence and vulnerability. Khan’s quippy style moves the story at a fast pace without feeling too intense.

Ahead of the Toronto launch, I spoke with Khan about avoiding diaspora novel clichés, who he is influenced by and capturing masculinity as it intersects with Brownness.

What inspired you to write this novel?

I wanted to write something that pushed against traditional techniques and tropes in diaspora novels – something that didn’t rely on meaning and emotion through nostalgic association, something more than “I miss the food back home.” I thought it was interesting to centre the immigrant experience in the immediate, and by writing it in the first-person present tense, to hopefully play with memory and knowledge.

We write/read so much about the binary/hyphen of “There” and “Here” and I think that distinction can make things opaque. There’s a nuance to the experience that I wanted to acknowledge and engage with, and also to write something that approached it from a broader angle. I wonder if using nostalgia is the best way to pay our debt to the past.

How does your own relationship to masculinity as a person of colour, inform the way you write male characters? Did you develop your protagonist from real-life inspiration or pure imagination?

I think real life and imagination are the same. My imagination fuels my “real life” interests and pursuits, and vice versa. The political idea around being a “dark-skinned male” was generative – I first heard it, in this context, used to describe the Boston bomber suspects in 2013. Who was the “dark-skinned male”? What was their life like? How did they scare people, and what is it like to embody that position within our wider moral and cultural context? I wanted to prod that idea and see what happened by peeling away at it and finding the human in the character. Of course, that emotive and intellectual idea was connected to me – in this context, referring to a young Muslim man, the “dark-skinned male” is me.

Omar, your protagonist, swings from anger to fear to sadness effortlessly. This is clear in the way you have written this character and describe his actions: in one scene he’s having sex or remembering an intimate exchange with Anna, the next he’s breaking into a house or posting tirades, equated to “terrorism,” both of which are extreme acts. And it’s all believable. Did you ever think, “How will a mainstream audience interpret this pendulum?” Did you feel you had to hold anything back or censor his feelings to make him more believable?

I do think we can expect more from mainstream readers and they will rise up to that. These extreme acts and their depiction, the vulgarity of it, is an interesting thing: because it’s so strange that it’s powerful it’s self-imposed. Wider culture dictates it, sure, but there is our own ability to analyze things and work through them, which is such a wonderful power. I’ve always found that asking myself why I can’t tolerate something – aesthetically, or morally – to be an enriching conversation. I didn’t want to have to hold anything back, and this formal application made sense since the book is about someone who has lost that sense of equilibrium. We make compromises for the sake of decorum in our daily lives because there’s a tangible sense that we might lose something – but Omar has had that anchor taken away from him.

Luckily, I never thought about this stuff while writing – it came after, when it was out for submission. Now, as I receive responses, there’s a kind of shyness in what people will talk about in the book but also in me: I’m kinda embarrassed when people talk about some of the scenes and how vulnerable they feel.

A book has to be a sort of playground, a place where you can experiment and engage with anything and still maintain a sense of safety – the book can be closed at any time – and there’s a deep privilege and intimacy in exploring these things in the novel. A book is a one-on-one connection and it’s the reader’s imagination that makes the final finishing touches, which I always want to come back to.

This sentence, “I crush them in the plastic box and lick the juice off my fingers” [on page 55] is so beautiful to me it captures the novel’s hardness and softness which sit together perfectly, resembling a straddling of worlds that is common to the immigrant experience. Without referencing the “here” and “there” narrative you wanted to avoid, there’s an inner and outer self I can relate to – it’s a more nuanced take on this narrative.

Mood was one of my big concerns, and I knew that being able to manage mood and tone would be key to making the book work. One of the earliest inspirations was Kanye West’s fourth album 808s & Heartbreak, which has this cool, mechanic sound juxtaposed against these extremely direct, agonizing and really warm lyrics. That juxtaposition creates a unique feeling, one that’s accurate to grief, which can often be a numbness caused by “too much” feeling. The two models in this sense that I used were Sam Selvon’s The Lonely Londoners and Hanif Kureishi’s Intimacy, both of which manage to inhabit this melancholy really well. And those paintings of George Dyer by Francis Bacon? They contain such contrasting, extreme emotions that seem like they may be on opposite ends, but are really close together.

Who are some authors you’re reading or looking forward to reading?