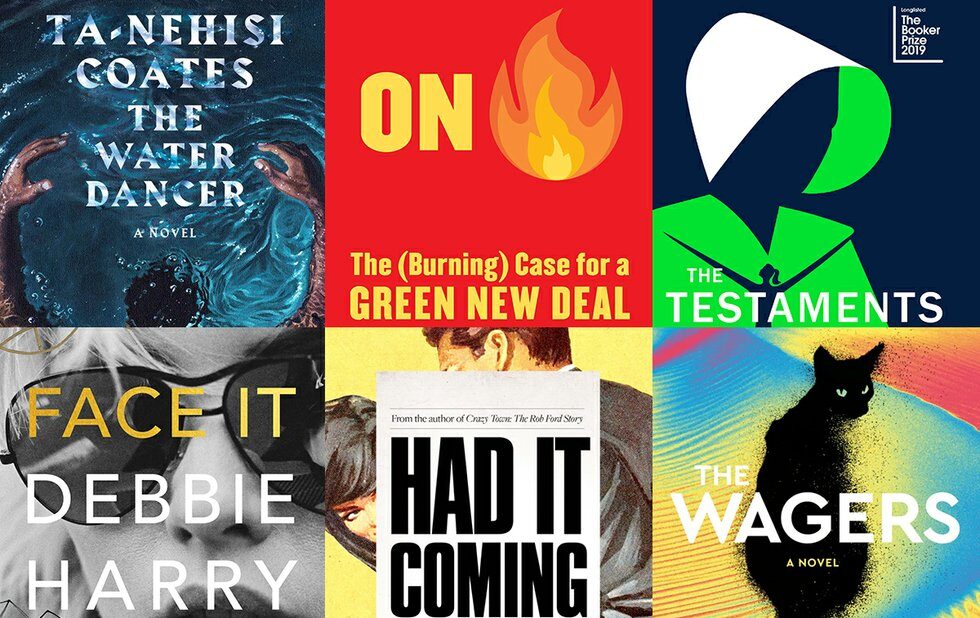 The heavy hitters – writing both fiction and non-fiction – are coming out this season with works that take on climate change, sexual assault, slavery and an array of other themes that cannot be ignored. Here’s a look at what to read in the coming months.

All right, the novel probably doesn’t need the plug, but The Testaments is far and away the most highly anticipated book of the year. Readers deeply unsatisfied with Atwood’s vague epilogue in The Handmaid’s Tale – and the TV series’ version of events – are hungry to hear what the Toronto author says happens to Offred after she rejects a path to freedom and remains in Gilead. Three narrators give their version of events in what’s guaranteed to roar to the top of bestseller lists. September 10 and Atwood appears at Bluma Appel Theatre on September 16.

HAD IT COMING: WHAT’S FAIR IN THE AGE OF #METOO? by Robyn Doolittle (Allen Lane)

Since playing a major role in exposing Rob Ford’s epic failings, Doolittle has deployed her journalistic expertise to the issue of sexual assault, already uncovering the distressingly low conviction rate of perpetrators in her Unfounded series. Her new book follows that up with deep research into why, despite governments stepping up and in with money and education, our justice system continues to fail survivors. Her major discovery is that judges and police know almost nothing about how trauma affects victims’ memories and, worse, they don’t understand the meaning of consent. September 24 and Doolittle appears at Hot Docs Cinema on September 26.

Frequent NOW contributor Taylor’s uncanny ability to combine poignancy and humour has made his stories of Indigenous people an important contribution to the First Nations canon. Here, three teenagers try to figure out how and why their odd schoolmate has created an unusual painting of a horse. The image draws them into her fantasy world until they realize something seriously wrong may be behind the painting and try to help the girl. September 21 and Taylor appears at the Toronto International Festival of Authors on October 22.

FEMINIST CITY: A FIELD GUIDE by Leslie Kern (Between the Lines)

Slowly, we’re becoming more aware of how many products are created without women in mind. Scientists do medical research using male subjects only, cars are designed without taking into account the female body. Now, in a series of trenchant essays, geographer Leslie Kern looks at the way cities are designed, examining everything from rape culture to snow removal and imagining a future where urban planning isn’t so hopelessly gendered. October 14

Retired professor Noah’s life is upended when he adopts his grand-nephew and takes him on a trip to France. Though the two have trouble connecting at first, the boy’s ease with technology leads Noah to uncover surprising details about his mother’s war-time past. In this, the first contemporary novel she’s written since the spectacularly successful Room, Emma Donoghue again demonstrates her facility for tension-ridden storytelling and unusual empathy. September 3 and Donoghue appears at the Toronto Reference Library on September 9.

A synopsis of Winterston’s latest bold and ambitious novel sounds like she’s all over the place. One thread follows Mary Shelley as she first imagines Frankenstein. Another features a transgender doctor in Brexit Britain who falls in love with a famous expert in artificial intelligence. A third looks at a designer of sex dolls and a fourth explores a cryogenics facility where the dead are waiting to come alive. But Winterston, enraged, outraged and sometimes very funny, has the skill to bring it all together in this strange love story. October 1

FACE IT by Debbie Harry (HarperCollins)

A memoir from Debbie Harry has many things going for it. For starters, the Blondie singer is super smart. For another, while she hung out with musicians from the Ramones to David Bowie, she was also deeply into New York’s art scene and its prime creators, including Jean-Michel Basquiat and Marina Abramovic. Plus, she made over 30 films with the likes of John Waters (Hairspray) and David Cronenberg (Videodrome). All of that experience makes for one of the must-read memoirs of the year. October 1

Two books by two exceptional authors cover similar brutal experiences of women who have been imprisoned, sexually assaulted and then released only to be re-victimized by their original communities. Both books probe the essential ethical issues faced by hopelessly disempowered people. In Girl, O’Brien’s hotly anticipated new novel, a kidnap victim of Boko Haram escapes and returns home with her child, the product of her rapist, and is mercilessly shamed. Morris follows up The Tattooist Of Auschwitz with another Holocaust story, this one about a girl who sleeps with her concentration camp commandant in order to survive, only to be charged as a collaborator and assaulted again in a Soviet prison when the camp is freed. October 15 and October 1.

Rushdie’s Booker Prize-shortlisted follow-up to his superb The Golden House takes another swipe at Trump’s America, this time reimagining the story of Don Quixote. Quichotte and his imagined sidekick Sancho travel an infinitely corrupt U.S. in search of the gorgeous Salma R (get it?) in what turns out to be a novel within a novel, punctuated with splashes of magic realism. Chaotic, funny and driven by Rushdie’s passion for pop culture, Quichotte is literary pandemonium at its wildest. September 3 and Rushdie appears at the Art Gallery of Ontario on September 30.

ON FIRE: THE BURNING CASE FOR A GREEN NEW DEAL by Naomi Klein (Knopf)

Klein, now the inaugural Gloria Steinem Endowed Chair in Media, Culture, and Feminist Studies at Rutgers University, is using her influence to back the Green New Deal just as Canada goes to the polls and the U.S. follows suit a year later. Pairing older essays with new works detailing what’s at stake as humans continue to trash the earth, Klein makes the case for a global commitment to a sustainable – both politically and economically – path to planetary rescue. September 17 and Klein appears at the Art Gallery of Ontario on September 20.

THE MAN WHO SAW EVERYTHING by Deborah Levy (Hamish Hamilton)

Levy, twice Booker-shortlisted, delivers a delicately poetic puzzle piece of a book about a man who pays a trip to East Berlin before the wall crumbles and just after he has a strange accident on the famous crosswalk at Abbey Road. This is a meditation on art, beauty, love and sexuality like nothing else. October 15 and Levy appears at Type Books on November 7

THE WATER DANCER by Ta-Nehisi Coates (One World)

The debut novel from one of America’s most influential Black writers (Between The World And Me) is a major event. Coates’s slave narrative follows Hiram as he escapes his masters and near death by harnessing his magical powers, then joins a guerrilla cell in the South and later the Underground Railroad movement in the North. What’s new in this narrative is its focus on the all-out war between the slavers and the enslaved. September 24

Joan Thomas eviscerates the myth of the benevolent missionary in this fictionalized account of how evangelicals descended on the Waorani, an Ecuadorean Indigenous community, devastating their culture and lives. Thomas, who won the Amazon First Novel Award and the Commonwealth Writers’ Prize for Reading By Lightning, delves into the ways the Waorani, who had no previous contact with the outside world, were sacrificed to religious imperialism and capitalist greed by intruders who saw themselves as saviours. September 3

Michaels has become famous for packing his stories with huge themes. His Giller-winning Us Conductors (my top book of 2015) covers jazz, espionage, science, Soviet prison camps and the unusual beauty of the theremin. In this long-awaited follow-up, he boldly explores the impact of luck and questions its essential worth in a tale about love, life, magic and gambling. September 24

DEATH AND THE SEASIDE by Alison Moore (Biblioasis)

An aspiring writer with self-esteem issues – abandoning a PhD thesis will do that to you – takes a first apartment with a manipulative landlady in this psychological thriller that has all the qualities of a powerful page-turner: an insecure protagonist, a predator who knows how to press her buttons and a holiday location with its own very creepy connotations. October 8

WATCHING YOU WITHOUT ME by Lynn Coady (Anansi)

After her mother dies, Karen returns to her Nova Scotia hometown laden with guilt. Living the high life in Toronto, she hasn’t paid much attention to her mother or her developmentally disabled older sister Kelli and now she has to make all the family decisions. At first she appreciates the advice and concern of caregiver Trevor, who’s been assisting the family. But he seems not to understand the meaning of boundaries. This is a taut, intense story about love and manipulation from one of Canada’s best writers. September 24

ALSO ON THE HORIZON