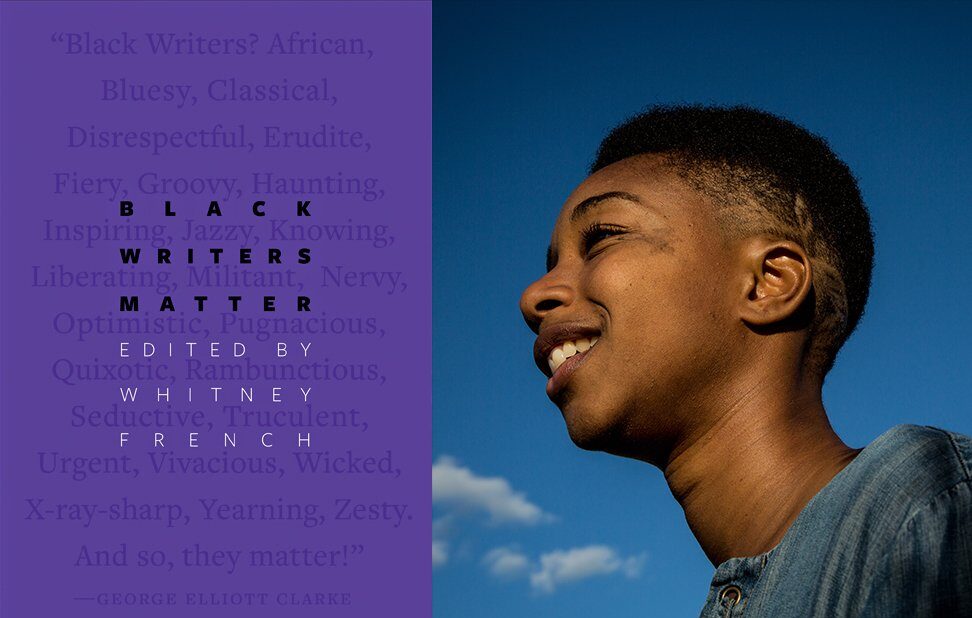 Whitney French has limited internet access right now. That’s because the writer/educator and editor of new anthology Black Writers Matter is in Northern British Columbia, teaching writing and performance to kids at the Tl’etinqox School as part of an artist residency with non-profit N’we Jinan. French is one of those driven creatives, intent on using literature to propel this country forward and reach every corner of every province and territory to connect with as many voices as possible.

Her latest project is also her biggest to date: Black Writers Matter (University of Regina Press, $27.95), an anthology of creative non-fiction by Black writers in Canada. The book chronicles the multiplicity of the Black experience while affirming not only that Black lives matter, but also that Black writing matters. The beauty of this collection lies in the way that Black lives are shown, rather than written about and here we have a collection of voices we don’t often hear from.

Rowan McCandless uses a quiz format to engage readers in a dialogue about how Black girls navigate eating disorders. Kyla Farmer traces her ancestry back to 1700s Nova Scotia, connecting traumas of colonization with healing that comes from the land. Eternity Martis’s story about growing up as a Black, South Asian woman hit home for me, a reminder that it is within my own family that I must address anti-Black racism.

How did this anthology come about and what was your primary goal in getting it published?

The idea was pitched to me by Bruce Walsh, publisher of University of Regina Press. My vision was to challenge the monolith of what it means to be Black in Canada. It was beyond important to include a multitude of voices. I spent time asking myself about the function, impact and legacy of Black Canadian anthologies.

The mantra became “Everyday every day.” How do we tell our stories by magnifying our dignity in the everyday? This was the focus.

I’ve noticed that stories by writers of colour have spun away from mainstream audiences. We’re writing more for ourselves, which means stories can be more nuanced, more accurate. Who did you have in mind as your primary readers?

Black people. Always. Black folks who live in small towns and rural communities in Canada, Black folks who don’t know what an anthology is, Black folks who have contributed to the legacy of Canadian literature and Black folks who are everyday people and see themselves reflected in these stories. Other readers from other communities have already expressed the impact that the writing has had on them, and that is excellent, a beautiful bonus. But truthfully, this anthology is a love letter to Black community.

The collection includes stories from all over Canada, with a range of ancestral and migratory experiences and diversity in narratives. How did you find these authors?

Thank you for recognizing the scope. That was intentional. I did a general call and I sought out specific writers I relied on trusted friends and colleagues with bright ideas and a pulse on good stories and my online community was very supportive in connecting me with writers in their circles. I do not take that labour lightly.

But another unique part of the process was seeking out voices through the art of the interview. In order to collect certain voices, I was honoured to interview a number of folks [for the two stories in Q&A format], many of whom do not share the same lived experience as me. That was a gift.

Solidarity between Black and Indigenous people is a theme throughout, and this reflects activism in the streets. Why is that connection important for Canada/Turtle Island today?

Because Black liberation outside the conversation of Indigenous sovereignty is not liberation. The conversation of solidarity was very intentional but also refreshing as it surfaced organically. Black and Indigenous communities – the two most historically systemically oppressed groups on Turtle Island – have time and time again survived and resisted and shone brightly in this settler-colonial nation state. And don’t get me wrong, the narrative is nuanced and complicated and layered but also speaks to a direction toward collective and collaborative freedoms. People living and creating on this land called Canada should be assessing these narratives, and their own narratives, all the time. It begs the question, what is our responsibility being here?