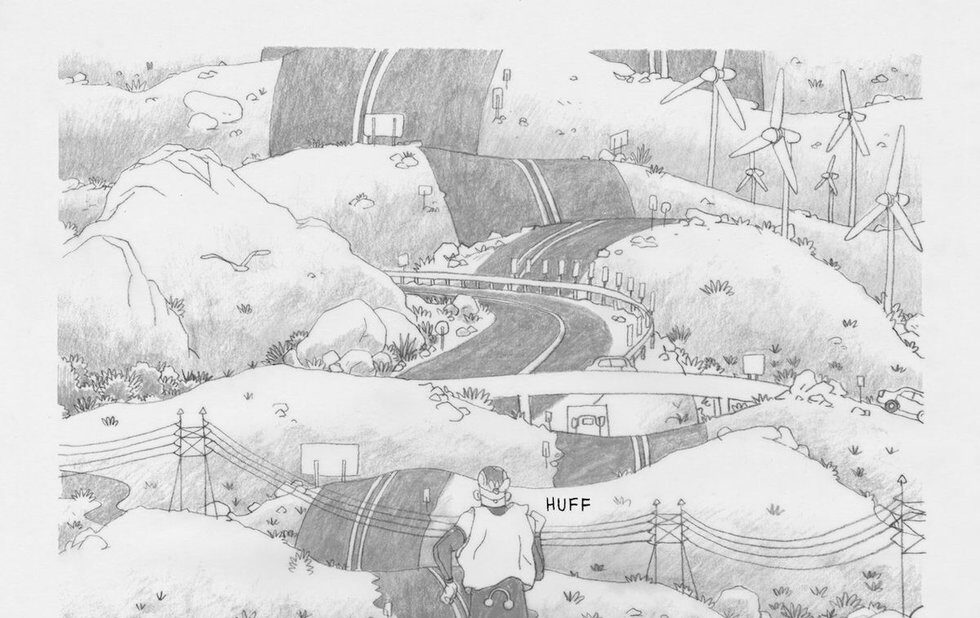 In Bradley Of Him, the Calgary-born, Montreal-based comic writer and artist turns his focus to a character that may or may not be actor Bradley Cooper. Running through the Las Vegas desert with a dangerous determination to train for a Lance Armstrong biopic, this unnamed and unreliable protagonist may be slowly losing his mind. During encounters with rival actors, patient-but-pissed-off hotel staff, and family members searching for a missing man, Willumsen sucks readers into a vividly illustrated fever dream.

“There’s something about the type of characters [Cooper] plays that represents this really specific type of Hollywood male lead,” Willumsen explains. “He’s the perfect nucleus of a high-brow/low-brow, neutral version of a strapping man in the early 21st century, neither here nor there. He’s supposed to be a guy you want to be or be with, but he also plays really awful people that are meant to be charming. He’s making his way up this ladder like all actors do, but there’s a gravity pulling toward the centre so he’s never too high or too low.”

Bradley Of Him plugs right into a moment when the popularity of the middle-brow superhero is pushing into more challenging territory. And in the wake of Cooper’s celebrated directorial turn with A Star Is Born, the comic’s manic, Academy Award-obsessed actor feels ripped from reality.

Willumsen started working on the book years before that film was announced. His interest in the actor began with Limitless, the 2011 sci-fi thriller about a struggling writer introduced to a wonder drug that gives him superhuman powers. From his cocky comedic roles in The Hangover films to the Oscar-bait drama Silver Linings Playbook, Cooper became an ideal blank canvas for Willumsen to paint on for his existential character study.

It’s easy to imagine Cooper going method to play an athlete like the protagonist in Bradley Of Him, but the character’s true intentions are harder to parse as Willumsen eschews narration to allow dialogue to drive the action.

“I’m honestly surprised that I turned out to be a cartoonist who makes books with a confusing aura that requires a lot of personal interpretation,” he says. “I didn’t want to get too obtuse but also not be so clear that everything just plods along. I was trying to create a particular mood while also maintaining my own interest in making it.

“It’s like you’re sitting on someone’s shoulders watching them do things but don’t have access to their inner thoughts,” he adds. “In a comic, when someone states their plans very clearly, it doesn’t feel true to the way people think. They’re usually guided by unknown, unseen forces that they can’t itemize easily. I’m not currently interested in writing characters with that level of confidence about their actions.”

Bradley Of Him’s hallucinatory illustrations bend perceptions of time, space and the comic book format. As the mysterious hero interacts with the befuddled people in his path, the predictable borders of panels and word bubbles are replaced with layered, mirage-like landscapes images.

Yet as hard as Willumsen tried to shy away from any similarities to real-life Hollywood, reality seeped in. The lead character’s antagonistic competition with Robert De Niro partially drives his quest for Oscar glory. When the press cycle for Todd Phillips’s controversial Joker reboot began in late summer, Willumsen’s story seemed like an even timelier funhouse mirror.

“Robert De Niro is in Joker, which people are saying is heavily influenced by Taxi Driver,” he says. “When I was writing the book, I was going to make one of the fake movies nominated for the Oscar a film about the Joker. It would be an adaptation of Alan Moore’s book The Killing Joke, so I realized I couldn’t do that because of the similarities to real life. Now one of the fake movies that ended up in the book is Robert De Niro in Uber Driver, which is a sequel to Taxi Driver. There are things in this story that hit eerily close to home.”