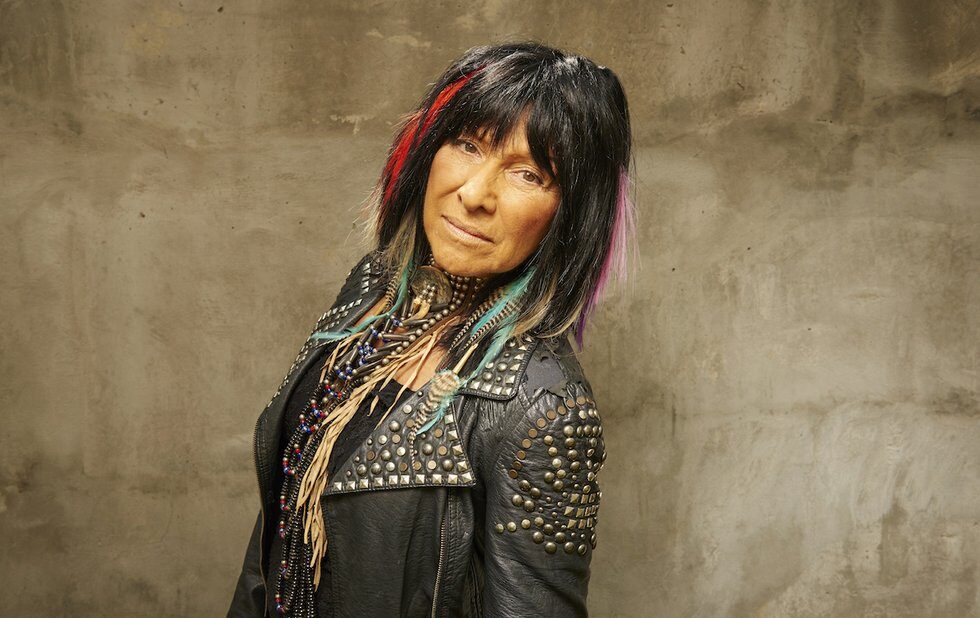 We’ve been hearing about the evils of the music industry – exploitative recording and publishing deals, theft of artists’ rights, sleazy record executives, gruelling lifestyle expectations – for as long as it has existed, but a new authorized biography about Buffy Sainte-Marie (Buffy Sainte-Marie: The Authorized Biography by Andrea Warner, Greystone Books, September 25) frames all of that through the lens of colonialism – and it’s nothing short of illuminating.

The legendary folk hero has, of course, understood the literally annihilating impacts of colonization for a very long time. It’s shaped her life from day one: if you’ve never been sure whether Sainte-Marie is American or Canadian, or quite how old she is, for example, that’s because birth records for babies born on Canadian reserves in the 1940s were often lost or destroyed, and babies adopted from reserves often had their birth stories erased.

To this day, she doesn’t know the basics of her origin story. As Vancouver writer Andrea Warner outlines early into the information-packed biography, which is shaped around 70-plus hours of lively interviews with the activist musician and some of her peers (Joni Mitchell provides the foreword), Sainte-Marie was born in Saskatchewan, probably on a reserve in the Qu’Appelle Valley, around 1941. She is Cree and was raised by her adoptive American parents largely in Massachusetts. Her adopted mother, Winifred Sainte-Marie, was part Mik’maq.

Despite being named best new artist of 1964 by Billboard Magazine, Sainte-Marie faced erasure throughout her career and had little access to the support systems – bigwig publicists and managers, for example – that could’ve helped her flourish. Some of her most famous songs are widely considered to have been written by those who popularized them (namely Donovan) it took her 25 years and $25,000 to buy back the rights for Universal Soldier from musical supervisor Elmer Jared Gordon she was allegedly blacklisted by American radio throughout the 70s due to her association with the American Indian Movement she wrote the first-ever quadraphonic electronic vocal album in 1969, which I’ve never seen mentioned anywhere.

And while she has the distinct honour of being the first Indigenous person to ever win an Oscar, she had to share it with Jack Nitzsche, her then-producer-husband who only sometimes credited her for her work and abused her so badly that she retreated from music for most of the 80s.

The timing couldn’t be better for a biography that encourages us to consider how white supremacy and patriarchy have left pioneering musicians of colour – the Jackie Shanes, the Rodriguezes, the Sainte-Maries, to name a handful – ignored and marginalized. Decolonization discourse has been top of mind in recent years, with universities overhauling curriculum, Indigenous hires being made at important cultural institutions and dying languages being revitalized through the work of contemporary musicians like Jeremy Dutcher and Tanya Tagaq.

Sainte-Marie has been asking us to engage in exactly this kind of dialogue, discourse and self-examination for over 50 years. She released the seven-minute song My Country ’Tis Of Thy People You’re Dying in 1966, about the colonization of North America from an Indigenous perspective, which also calls out Canada’s residential school system, systemic greed and Hollywood stereotyping. She considers the song “Indian 101.”

Two years later, in 1968, she fought back against the lack of Indigenous representation in pop culture by agreeing to take a part in the popular Western TV series The Virginian only if actual Indigenous people were hired to play Indigenous roles, and if the writers would give her character more complexity. She helped the producers find actors, and made it happen. The Virginian became the first “Indian show with an all-Indian cast.”

“It was much more important to me to pull off that kind of coup than to get my stupid face on a TV show,” says Sainte-Marie in the book.

There’s her education scholarships for Indigenous youth, which she funded out of her own pocket, and the Cradleboard Teaching Project she founded in 1996 to bring Indigenous curriculum into schools, which resulted in the multimedia curriculum CD Science: Through Native American Eyes. (As a former schoolteacher, education is near and dear to her heart.)

But, as Warner outlines, such activism often earned her the reputation of an “angry Indian” rather than leading to pop chart success.

The world is finally – finally – catching up to her. Finally giving her visibility through Junos and Polaris Prizes and conference invites and awards show presentations and through books like Warner’s that help write her back into history and pop culture.

She is now (approximately) 77, living peacefully on a farm in Hawaii and still spreading her message of unity and resistance through new recordings.

Has she, in 2018, become an embittered shell of the sparky, optimistic folk singer of the 60s Yorkville and Greenwich Village coffee house scenes? She has not.

“Fame and fortune are great,” she says midway through the book, “but have you ever delivered a baby goat?”