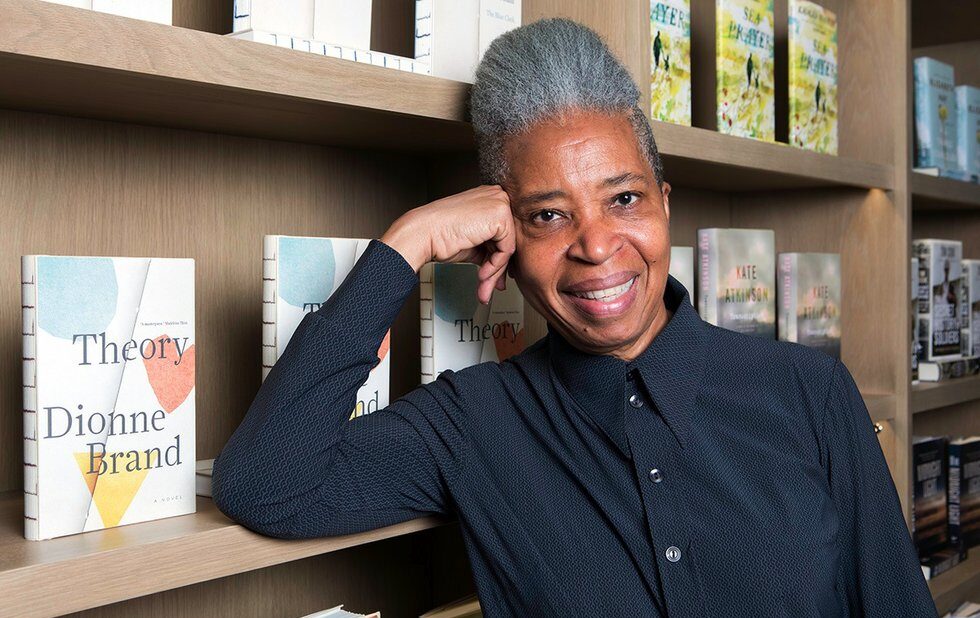 It’s beautifully ironic that Dionne Brand’s main literary theme lately is how hard it is to write. Because plainly she has no problem with that herself.

She’s releasing two books this fall, the prose poem The Blue Clerk (McClelland & Stewart) and the novel Theory (Knopf), both launched at the AGO on September 12. The Unpublished City (Book*hug), a collection of short works by emerging writers that she curated, has been shortlisted for the Toronto Book Awards, which is being presented October 10.

Brand’s other central theme is the question of how to write with integrity. The city’s former Poet Laureate, Toronto Book Award winner for What We All Long For and Griffin Prize winner for Ossuaries has no problem with that either.

In Brand’s new prose poem The Blue Clerk, a poet engages with the clerk who has taken serious inventory her work, probing it, challenging it.

“I’m always questioning what it means to bring an idea into the world and what its impacts can be,” she says at the Penguin Random House offices, snappily dressed in a black striped shirt and sporting a highly structured new coif. “If I’m not thinking all the time, if I’m not putting my thinking through a set of rigours, political or aesthetic, then I’m not doing anything.”

Her clerk is blue because, she says, it’s the best colour in the world.

“Blue has so many levels of meaning. Blue because of the materials of writing – the ink and the pen – blue because of a certain melancholy about the world, particularly now.

“We live in dire times. We’re burning up the planet – for absolutely no reason except profit and a horrible kind of avarice. We’re living in a sci-fi time when we’re governed by corporations. That’s what I have to tackle. We’re at this tipping point where it’s difficult to turn back. And no one wants to say, ‘Stop.’ But I will.”

That’s what her ungendered protagonist in Theory, referred to as Theoria, wants to deal with, too. But they’re trying to do the impossible: finish a thesis on the history, present and future of gender, race and class. Not only are the ideas impossible to harness, they have to write about them within the constraints of academic formats of footnotes and references and academe’s values in general.

“Capital intervenes, consumerism intervenes, everything is monetized or capitalized in some way. So these deep theories about how you might live a life and how we might be human become commodified in that setting. Those ivory towers are not simply ivory towers. At one point, they were colonial ivory towers – now they are corporate.”

And it doesn’t help that serial relationships with three different women derail Theoria’s thinking. The first, Selah, is overwhelmingly beautiful, making it almost impossible for Theoria to think. When I suggest to Brand that Selah doesn’t appear to be very deep, she says, “Actually, that’s Theoria’s problem because they can’t describe her beyond that.”

Yara is the second lover, an activist who scoffs at the idea that a thesis can change anything. And the third, Odalys, has her own theories based on a spiritual practice, gods and goddesses, ideas Theoria disdains.

Theory is an intellectually dense book of ideas but it’s also funny,  a quality I don’t necessarily associate with her work.

However you describe its tone, it’s close to being a full-on satire of academia, especially in the last few pages, which reproduce the beginning of Theoria’s footnote-laden thesis.

“A lot of academics feel tethered to those forms and it is the practice. It’s how you get through those systems, to make 1,600 references and re-rehearse the ideas of someone else.”

The collection The Unpublished City does the exact opposite. Short, vivid pieces by 18 new writers communicate directly, taking us into hidden corners of the city and experiences seldom evoked in T.O. books. Brand, who has always been a major supporter of new writers, went out of her way to find them – at readings, meetings, online. She sees the book as a kind of intervention, a way to disrupt the process of what gets published.

“The book not only features unpublished writers, but things that are not yet known about Toronto,” she says, “and what moves the city.”

She worked on all of these projects, plus Luminous Ink (Cormorant), another anthology of Canadian authors writing about Canada’s literary scene, at the same time.

How does she do it?

“I have no friggin’ idea,” she laughs.