After a series of abrupt life changes and illness, the Haitian-born Toronto poet and performer has published her first book at 21 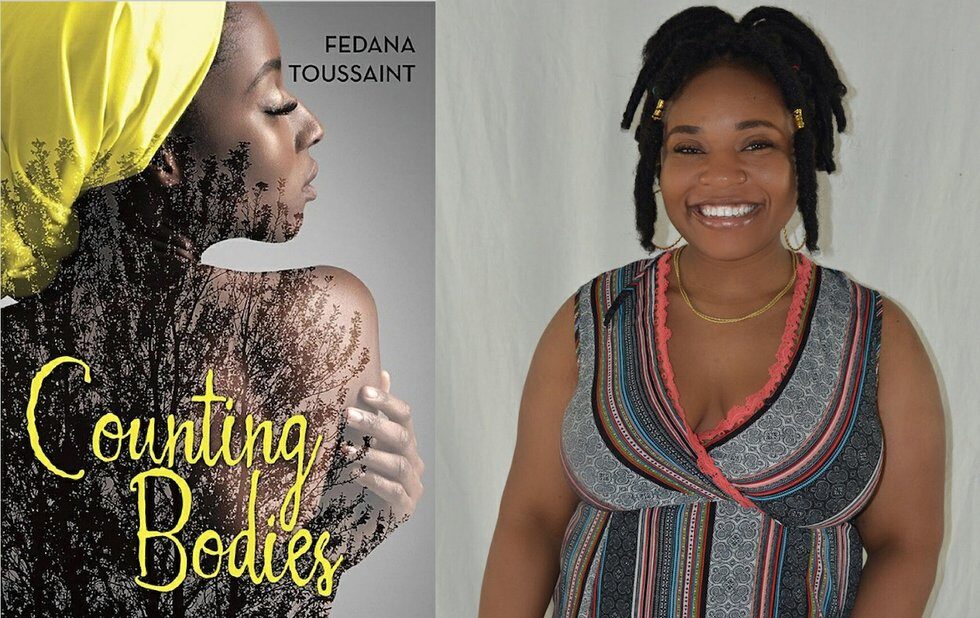 Fedana Toussaint has been filling notebooks with words since she started high school eight years ago. What started as a hobby and a way to cope with tumultuous life changes has evolved into a multi-faceted artistic practice.

At 21, the Haitian Canadian poet and performer has earned a rep as a rising star in Toronto’s spoken-word scene and signed a publishing deal for her debut book, Counting Bodies (Archway, $12.99), which came out on April 21.

The compilation captures the vulnerabilities of love, drawing on countless stories of heartbreak and challenges faced in relationships. Having experienced pain in her own relationships, her words become a powerful remedy to toxicity.

“I’m nervous. But it’s well overdue. I wanted to be published before 21, but it’s happening now. I know my poetry is good and I know people will love it,” Toussaint says with a smile.

She had already gained a reputation for her live presence following a spoken-word performance at Scarborough open-mic event RISE Edutainment in August 2018.

“My jaw just dropped,” says Akeem Raphael, a coordinator at RISE. “I remember saying, ‘Who is this person?’ and I’ve been a fan ever since. She knows how to tell stories and paint pictures and bring you into her world and be able to feel her world in your own setting.”

Raphael isn’t the only one who became star-struck by Toussaint’s poetry. He describes her as a local celebrity – or “underworld icon” at RISE. “The world needs to see more of her,” he says.

Born in Haiti and raised in the Bahamas, Toussaint moved to Florida in search for a better life in 2007. Unfortunately, her health declined and doctors found a benign tumour beneath her skull. The tumour grew so large that she became deaf in her left ear.

“Just to have the procedure to take the tumour out and all of the equipment I needed was about $20,000 – and we didn’t have health insurance,” she recalls.

Her family decided that moving to Canada was the most affordable option they had to ensure Toussaint would get the life-saving treatment she needed.

“One day I was sitting in my house, and my parents came in and told me to pack my things and get my transcripts from school because we were moving to Canada the next day,” says Toussaint.

Just like that, in 2010, Toussaint found herself moving to Toronto to start her life.

The surgery to remove her tumour was successful. However, doctors were unable to recover her hearing.

Facing so many abrupt life changes, Toussaint turned to poetry.

“At school, I would sit in the lunchroom by myself and just write. I wanted to look busy, but it was also the only way I could express the emotions going on in my head,” says Toussaint.

When it came time to apply to university, Toussaint knew she wanted to pursue a writing career.

She applied to journalism programs at the University of Toronto, Ryerson, Brock in St. Catharines and Wilfrid Laurier in Brantford. She wanted to be the furthest away from her family so she could have her independence, so she accepted Laurier’s offer.

But she quickly discovered journalism was not her path. Toussaint wanted to write freely and the structure of journalistic writing was too technical for her. She switched programs from journalism to law and now has high hopes of becoming a lawyer once she finishes school in 2022.

When she isn’t studying, Toussaint travels to Scarborough to perform her poems every Monday at RISE.

Jamar Barclay, a poet and the host of the annual RISE event Love Languages, recalls how Toussaint’s poetry captures his attention.

Toussaint becomes overwhelmed with nerves before performing her poetry, but the feeling quickly shifts to something more like an urgent necessity.

“It’s freeing – like a weight lifted off my shoulders,” says Toussaint.

Through countless heartbreaks, and being treated unfairly by past partners, Toussaint is finally taking a stand against those who have hurt her. Counting Bodies is a memoir that exposes her vulnerability, toxic partners and the beginning of taking her life back.

Toussaint reads an excerpt: “You’re not delicate until you finally start talking about it. Everyone treats you like a flower, watering you with their ‘I’m sorry’. Or are you alright then planting you in some even deeper?”