NOW MagazineCultureBooksIris Apfel: “I work more than any three young people I know”

Iris Apfel: “I work more than any three young people I know”

The nonagenarian style icon on her new book, feminism and the need for sleeves 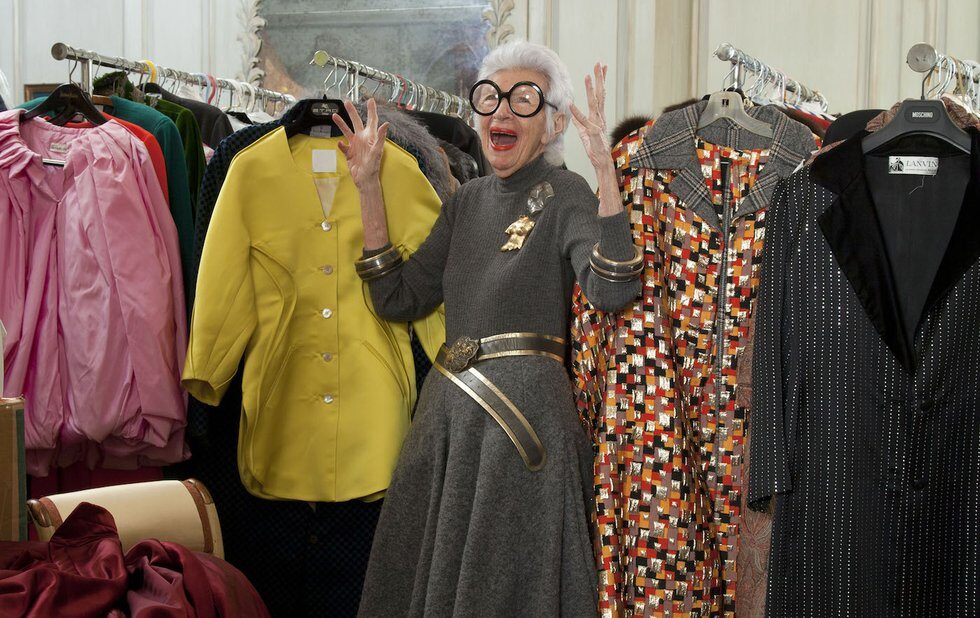 Iris Apfel is likely the busiest 96-year-old you’ll ever meet. Over the past few years, the fashion icon has designed two furniture collections and a ready-to-wear line, modelled for Kate Spade and started her own fashion course at the University of Texas at Austin. This month, Apfel also released her second book, Iris Apfel: Accidental Icon (HarperCollins).

Naturally, when I reach Apfel by phone in her Manhattan home, she’s working.

“I’m so sorry, I just need to find a place to sit down. I’ve got so much stuff all over the place,” Apfel says. She’s designing five window displays and curating a pop-up shop of her favourite clothing, jewellery and accessories for her book launch at Bergdorf Goodman. “I’m very, very busy. I work more than any three young people I know,” Apfel says later.

She is candid and charmingly cranky, quick to call out the self-entitlement of millennials or the homogeneous state of fashion in a way only a nonagenarian with a career spanning more than six decades can get away with.

In Accidental Icon, Apfel writes about starting off as a journalist at the seminal fashion trade journal Women’s Wear Daily and later founding the influential textile company Old World Weavers with her husband, Carl, in 1950. Apfel worked on design restoration projects for the White House during nine presidential administrations from Harry S. Truman to Bill Clinton, earning herself the nickname the “First Lady of Fabric.” And yet, as she writes, she only became a style starlet in her 80s when in 2005, the Metropolitan Museum of Art presented an exhibit of her personal clothing and accessories, which caught the attention of fashion photographer Bill Cunningham.

Along with glossy photos showcasing Apfel decked out in her signature colourful ensembles and anecdotes from her youth (she describes buying her first pair of jeans in the 1940s despite the shopkeeper telling her “ladies don’t wear jeans”), the book is filled with Apfel’s musings on modern society, touching on everything from smartphones to the cult of celebrity.

Here, Apfel and I chat about why she would never write a memoir, being a role model for other stylish older women and the golden age of flying.

Why did you decide to to write Accidental Icon?

In the book, you write about how you didn’t have any intention on becoming a role model for aging. Do you get letters from older women saying you’ve inspired them?

Oh my goodness, yes. I get letters from older women and from young women and men, and they all more or less tell me the same thing: that I’ve inspired them, given them courage and given them a sense of freedom and permission to do a lot of things they didn’t think they could do. That makes me happy.

They’ve thrown in more sleeves, but I don’t see much of anything being done for older women. For a while, it was just horrendous. You couldn’t find anything with sleeves. A few years ago I decided that if I had extra time, I would open up a very chic shop on Madison Avenue and call it The Sleeve, and people would come from miles around.

In the book, you write about how we’re too obsessed with smartphones and use technology as a crutch. What kind of impact do you think that has?

I think young people depend on devices and they don’t develop anything in their heads. They don’t remember anything. They think if they press a button they can learn anything, find out anything and that makes them curious. Young people don’t relate to each other anymore, they don’t know how to converse. All they know how to do is press buttons. You don’t agree?

Well, I’m a young person who spends a lot of time reading on the internet and I feel like I’m still curious.

I’m not condemning anybody. I would assume you’re not one of those nincompoops.

I think it’s terrible. I have nothing to do with [any of the Iris Apfel social media accounts] and I’m all over the place. I don’t do any of the pages myself. I don’t even look at it because I don’t care what you had for breakfast or who you’re sleeping with or where you’re going. I don’t know why everyone is so interested. They waste a lot of precious time and they live vicariously through other people, rather than doing all these things themselves.

Do you have any advice for people who are caught up in dressing like other people or wearing what other people have deemed trendy?

They should first develop themselves and get an image of who the hell they are. Once they know who they are, maybe they can decide how to dress themselves. Why do you want to look like everyone else? I don’t like trends. If there’s a trend that comes along that’s suitable for you, good. But trends don’t suit half of the people. Everyone wants instant everything, so they don’t develop their own personalities. What do you think?

I think for some young people, it’s not necessarily that they’re lazy, it’s that they’re just caught up in their work life and they don’t have time to think about what they wear and they just buy whatever.

Well, are you still a millennial?

I think the younger ones are much worse.

I was reading an interview you did a few years ago with Style.com and when the interviewer mentioned that they noticed some underlying feminist themes in the Albert Maysles documentary about you, you said you’re not a feminist.

I don’t know what a feminist is supposed to be. What is a feminist?

Someone who believes that men and women should be treated equally.

Well I believe they should be treated equally. That’s not being a feminist, is it?

That’s a definition of feminism some people use.

What do you think being a feminist is?

I never really bothered my head about it. I’m not interested.

In your book, you write a lot about the places you’ve travelled. Where do you hope to travel to next?

The less travelling I can do from now on the happier I’ll be. Travelling today is an agony. You’re treated like a barnyard animal when you travel today, no matter what you pay or what category they put you in. I know what travelling used to be like, you travelled like ladies and gentlemen. Years ago, they sent for you in a limo, they took you to the airport, you were escorted to a private lounge, you were given newspapers and magazines in any foreign language, you were served champagne or Scotch or whatever you wanted. There was caviar. Everyone dressed beautifully. It was a whole different ball game. Now everybody looks like a rag heap.

I hope you don’t think I’m too negative. I’m really not. I just call a spade a spade.

Let’s end on a positive note then. What’s something about today’s fashion that you’re really excited about?

You didn’t pick a very good subject because there’s nothing much in today’s fashion that’s exciting. There’s nothing new. I don’t see anything exciting.