NOW MagazineCultureBooksJonathan Safran Foer convinced me to give up eating beef

Jonathan Safran Foer convinced me to give up eating beef

In We Are The Weather, the author makes a powerful moral case for eating no animal products before dinner as a personal climate-change mitigation strategy 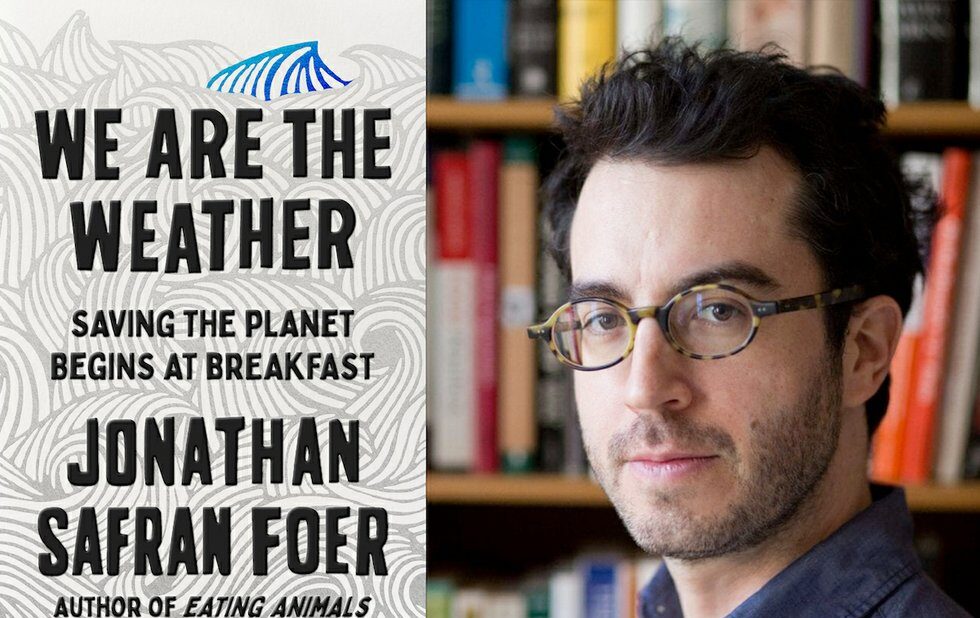 Every once in a long while a book can change one’s life in a significant way. For me, Jonathan Safran Foer’s essay collection We Are The Weather: Saving The Planet Begins At Breakfast (Hamish Hamilton, 288 pages, $29.95) is one of those books.

If you recognize the author’s name it may well be as a result of his novels, such as Extremely Loud & Incredibly Close, which was turned into the Oscar-nominated film starring Tom Hanks and Sandra Bullock. But Foer also made a splash in the non-fiction realm with his 2009 bestseller Eating Animals. We Are The Weather finds Foer returning to similar subject matter in a timely way.

Over the past seven years, while working on TVO’s current affairs series The Agenda With Steve Paikin, I’ve had the opportunity to read lots of books dealing with issues that affect our physical and mental health, the ins and outs of governments and our understanding of the universe. In most cases I’ve come away with a clearer picture of how things function and how they might function better.

Climate change, however, is an issue where the challenges to effective, meaningful, individual action can seem insurmountable. The more one learns, the more discouraging and intractable the issue can appear. Which may be why We Are The Weather was the lever that tipped me into action.

It’s a purposefully structured book, so it’s not until page 64 when we learn: “This is a book about the impacts of animal agriculture on the environment.” That same page introduces the notion of eating no animal products (meat, cheese, dairy, eggs, etc.) before dinner as a powerful, personal climate-change mitigation strategy.

But all those earlier pages serve a critical purpose. They lay the groundwork for recognizing that this approach to eating is worthy of serious consideration, despite the fact that meat-eaters may find it daunting. Those pages weave a story of the power and importance of individuals. They introduce the reader to the African American woman who, in March 1955, boarded a bus in Montgomery, Alabama, and refused to give up her seat: Claudette Colvin, who predated Rosa Parks. They chronicle Jan Karski’s frustrating meeting with U.S. Supreme Court Justice Felix Frankfurter after journeying from Nazi-occupied Poland to Washington, D.C., to reveal the horrors of the Warsaw Ghetto and the concentration camp killings. But they also report on the many sacrifices ordinary people across the United States made in support of their country’s involvement in the fight against Hitler.

People blacked out their lights. They adhered to a 35-mile-per-hour national speed limit. They rationed sugar. They grew “victory gardens.” All in an effort to win a war “over there.”

We Are The Weather posits that the equivalent struggle today is the climate crisis. And the problem, according to Foer, is that like how the Second World War was for American (and Canadian) civilians, climate change is a crisis “over there.” It’s the big polluters, the federal government, the Chinese that must act if we’re to have a chance of containing catastrophe.

We Are The Weather aims to convince us that individual actions can also stave off disaster. Chief among them is changing our food choices.

There is considerable debate over the percentage of greenhouse-gas emissions that can be attributed to animal farming, with the United Nations’ Food and Agricultural Organization (FAO) advising that livestock are responsible for 14.5 per cent. Meanwhile, by taking into account emissions not counted by the FAO, including those from the burning of forests to create more animal-feed cropland, the Worldwatch Institute clocks that figure at 51 per cent – or “more than all cars, planes, buildings, power plants, and industry combined.”

That’s a huge discrepancy. But, even at the low end of the calculations, it’s apparent that Foer’s recommendation to eat no animal products before dinner is an action that would have significant ecological impact. According to research by Brent F. Kim, et al., the vegan-until-dinner diet has a smaller carbon footprint than “the average full-time vegetarian diet,” saving 1.3 tons of CO2e per year.

And yet… no milk in my morning coffee, no cheese on a lunch of leftover pasta? Yikes.

The almond milk I tried created the sort of flavoured-coffee swill I’ve always avoided. And, in a family where dinner is invariably large enough to provide the next day’s lunches, if animal products are included in dinner, they’re lunch as well. That’s a problem.

Foer writes about his decision to become a vegetarian at age nine, and of the terrible guilt he feels each time he stumbles and indulges in a meaty meal. So, perhaps I shouldn’t bite off more than I can chew.

My wife and I decided we would cut out beef entirely, eliminating its 6.61 pounds of CO2e per serving (in contrast to poultry’s 1.26 and cheese’s 2.45). Then we told the family, including my daughter and her husband who, it turns out, had been contemplating something similar. We were just the springboard they needed.

My daughter actually went through a period of vegetarianism years ago, primarily due to animal welfare issues. But she found it difficult in a household of committed omnivores and it didn’t last. This time she expects it’ll be easier sticking to the plan, which includes further reductions in animal consumption, as she investigates interesting meals that don’t depend on meat, cheese, or dairy. “I have a fear of smelling bacon,” she told me. “That will be difficult.”

We’re only a couple of weeks into our beef-free diet and so far, moment of panic at a pho restaurant aside, so good.

“Climate change is the greatest crisis humankind has ever faced,” Foer writes. “We must either let some eating habits go or let the planet go. It is that straightforward, that fraught.

“Where were you when you made your decision?”