NOW MagazineCultureBooksJully Black is the true winner of Canada Reads 2018

Jully Black is the true winner of Canada Reads 2018

The R&B artist's exchange with Jeanne Beker on the CBC literary competition was pure drama, and perhaps the kind that can bring about a reckoning 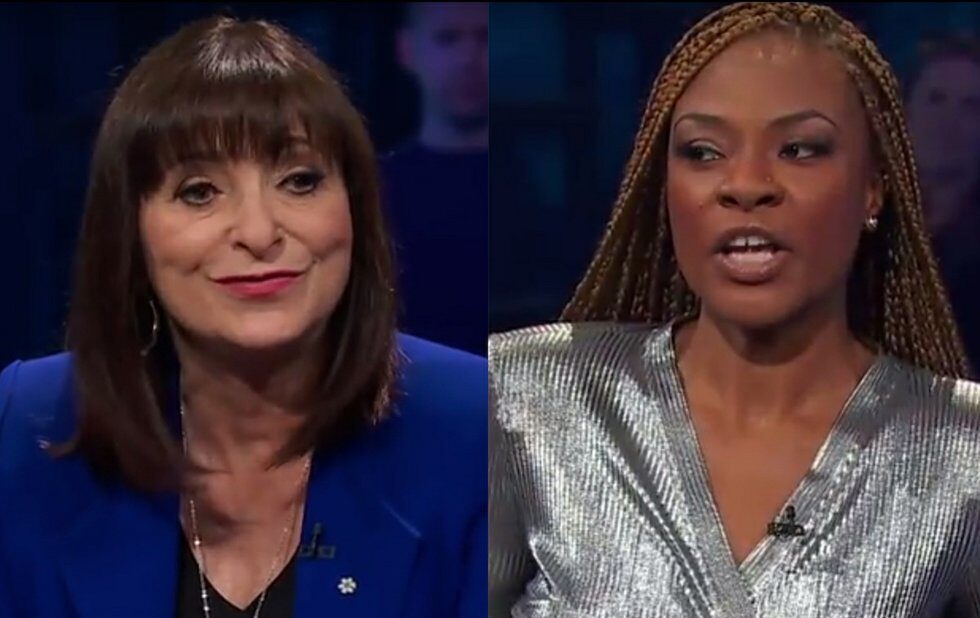 Jeanne Beker (left) and Jully Black's discussion about privilege turned into a teachable moment on the Canada Reads finale.

Late on Sunday night I was scrolling through the pop culture blog Oh No They Didn’t when I came across a post about the finale of Canada Reads 2018.

Titled Jully Black Checks Jeanne Beker’s Privilege On Canada Reads, it included a video link to the episode and the suggestion that viewers start at 31:30 for the tense interaction. The finale had taken place on Thursday, but the news had taken a few days to reach me because Easter weekend was a busy one at work.

Ordinarily CBC’s Canada Reads –  an annual competition where six famous Canadians present novels and debate their value as the Canadian story of a year – is a bore, more like the Olympics of Canadian nice-ness than an actual debate about storytelling and nationhood.

But this clip was pure drama, and perhaps the kind that can bring about a reckoning.

I haven’t read any of this year’s contenders, but ultimately Canada Reads is not a competition about which book tells the most definitive Canadian story. It is a debate won by the orator most capable of pitching their book as the year’s definitive Canadian story. And it doesn’t matter how well that story is written or whether it needs to be told and recognized. If we are not yet able to hear the story or receive it, we will reject that story.

And reject is exactly what TV personality Jeanne Beker did when musician Jully Black called out her  privileged position. In her defence of Mark Sakamoto’s Forgiveness, Beker was talking about the importance of healing when Black cut in.

“There’s healing and then there’s action,” she said, going on to describe cottages and Visa card donations to emphasize the distance colonial privilege creates from the reality Indigenous, Black and other people of colour live everyday, because we have not atoned for our past as a racist, colonial state.

But instead of facing the picture Black was painting, Beker deflected and asked, “Why are you attacking me, Jully?”

With more elegance than I could imagine given the amount of rage I felt while watching, Black replied, “Let me tell you what you just said: ‘I feel like.’ So whatever you are feeling, take it to the altar because I’m not the one responsible for your feelings.”

I should not have to assert my opinion that Black handled the situation elegantly, but I do. Because women of colour who speak up are perceived as being combative for the pure audacity of asserting ourselves. Because we are not entitled to have a voice.

By the finale, the book Black had defended, Cherie Dimaline’s The Marrow Thieves, had already been eliminated from the competition. The point she was making was not about winning, but about storytelling.

This kind of conversation is all too familiar for women of colour, and this is how it usually unfolds:

2. Smart, confident, assertive woman of colour expresses an opinion that should result in the white person pausing, reflecting and  maybe stop talking.

3. White person gets defensive and starts to play the victim and claim they are being attacked.

I see these types of interactions all the time – online and off. They’ve been written about in The Guardian and Buzzfeed.

In the past two months, the special place that we outspoken women of colour inhabit, the constant negotiation within ourselves about whether to speak up or bite our tongues for fear of being perceived as aggressive, has taken up far too much of my energy.

As infuriating as it was to watch, that exchange on Canada Reads was also validating. The conversation confirmed that this is not a narrative I have constructed for myself. Rather, it is one that whiteness projects onto me.

Black had valid and important points that shouldn’t be misunderstood: as Canadians we need to fully come to terms with the fact that we live on stolen land. This is a colonized nation, so we need to make amends and fix problems, and people who live with privilege are far removed from the realities experienced by Indigenous people, Black people, immigrants and people of colour.

People respond defensively because conversations about oppression require them to reflect on their own comfort and consider how it comes at the cost of other people’s.

Jeanne Beker won Canada Reads 2018 for her defense of Mark Sakamoto’s Forgiveness, possibly because as a white woman with much media savvy she was able to defend the novel and present it as a winner.

But in my mind Jully Black is the winner because she exposed one of whiteness’s oldest tricks: silence the oppressed. By identifying this interaction between Black and Beker as dismissive, we should be better able to ask, “Whose reality am I unable to see? Whose stories am I silencing?”

And if more of Canada’s painful stories are told, if we can come to terms with our past as a nation, we will be better able to write the future.