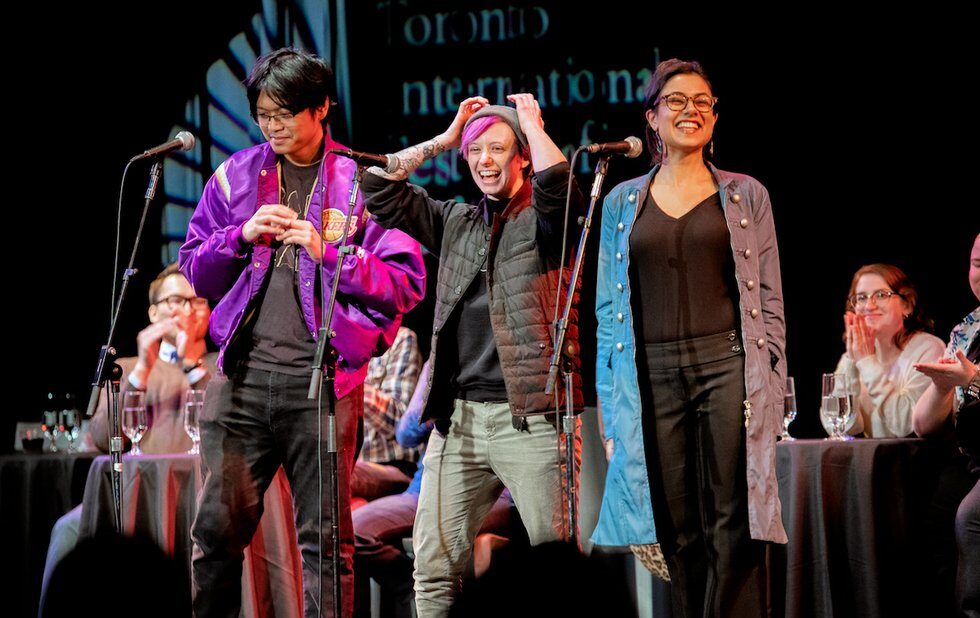 Each year, creative writing students from post-secondary schools gather at Harbourfront Centre for an evening of improvised storytelling. This year’s competing teams hailed from York University, the University of Guelph, the University of Toronto Scarborough and last year’s winner Humber College.

The audience prompts the storytellers with story starters and scenarios and the winners receive a cash prize and publication on NOW’s site. This year’s judges were writers Joseph Kertes and Richard Scrimger and Toronto Star book editor Deborah Dundas. Novelist and critic Antanas Sileika was the emcee.

The winners were Kai Taddei, Preeti Dhaliwal and Miguel Leandro Gamboa of Guelph U. Read their story below.

Story told in a child’s voice.

P: So I have been saving my allowance for three weeks to get this really cool watch. I scrubbed the toilet, and I got 50 cents for scrubbing the toilet. And then I scrubbed all that – you know that black mildew that lives in the window sill? I scrub it with a toothbrush and my mom gives me a dollar fifty. AND I even vacuumed the couch – but the couch is really special cuz I get a dollar for vacuuming it, and sometimes when my dad lies down, change falls out of his pocket so I get EXTRA toonies and loonies – I made nine dollars one week! So I did these chores for three weeks and saved enough money to get this really cool new watch.

K: I wanted this watch because my older brother Larry has one, and Larry is 16 and he’s really cool – he’s taller than me, and he has five o’clock shadow, and he has a lot of friends – but whatever that’s no problem, I have friends too, like Marty who’s the coolest. And so I thought that if I bought this watch, then Larry and I could match and we could be like the cool matching brothers together.

M: There’s this forest we like to hide out in behind our house, and I decided that would be the perfect place to show off my cool watch to Marty. I said hey Marty, look, I saved up for three weeks and got this cool watch, it doesn’t just tell time it tells history.

P: And so we went into the forest. First we had to walk through this chain link fence but instead of opening it, we jumped over, and it was SO great. I got a little scratch on my shin but I kept on walking, and then we entered 1992.

K: Marty and I have been best friends for like EVER, and we’ve always played imaginary games together, so I said to Marty: “This is sort of like our own Bridge To Terabithia!” And then Marty sorta looked at me with that expression he gets with his blue-green eyes and his hair, with his bangs that fall to one side and always get in his eye and he said: “You know that book ends real sad, right?”

M: And then he said, “Anyway, the important thing about being in 1992 is that we get to see Michael Jordan in his prime! I’ve always wanted that! I love Michael Jordan.”

P: Yeah, so then this Chicago Bulls jacket and Chicago Bulls hat just fell from the trees and landed on my head, and the forest cleared, and there was a giant basketball court and I grew six feet so I was [counts on fingers]… my math’s not very good.

K: I was taller than Larry for sure. We were in the forest still though of course, but Marty and I, these imaginary games, they’re kind of like… what’s a word? The glue of our friendship. We had the coiling slick arbutus near us, and the withered old gary oak trees and… this was like, second home for him and I.

M: And over the course of the night we went from 1992, to 2050, to the year TWO, and then we realized when it was getting dark… that we couldn’t get back!

K: We’d realized we were stuck because my watch, the little hands weren’t moving anymore, and I don’t know when that happened – it might’ve been when I decided to wade through the stream with all my clothes off, or it might’ve been when I fell out of the branches of a tree earlier in the day… but I wasn’t sure how we were gonna get home. I mean, dinner was really soon!

M: But there was this really cool music that doesn’t really play anymore, and it had all these violins that were playing really fast, and people were pointing diagonally and stuff, and it was really fun and so… I wanted to keep doing that for a while… it was cool!

P: My mom always said that the 70s were so great, that everybody loved everybody – and I really loved Marty, so I thought maybe I’ll tell Marty how much I love him and then we’ll get back because “Love always fixes everything” – that’s what my mom says.

K: Now, 10 years later, and Marty and I are together. And you know, we still look back on those childhood days, when we were boys in the forest, before we’d come out… and you know, we really were stuck in history. And now, we’re creating a whole new history, between the two of us. And honestly? I couldn’t ask to be in a better place in time.