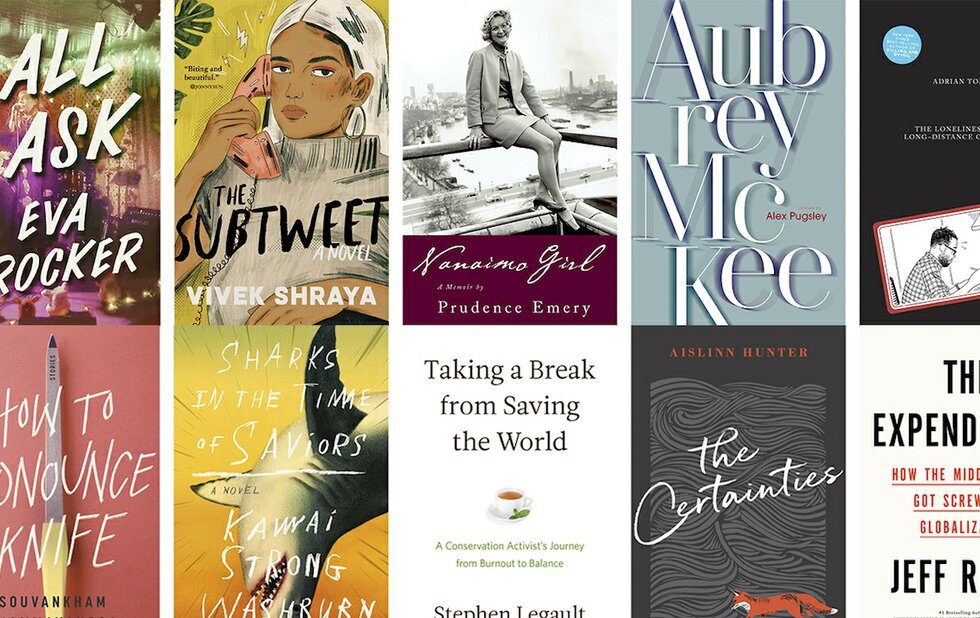 If ever there was a time when books could bring some calm and comfort, this is it. You may not be able to buy books in a store, so order online and hunker down. Spring’s most anticipated titles span non-fiction, memoir and fiction. It’s not necessarily the lightest reading some might hope for, but it’s what we think is the some of the best on the horizon. (Given the circumstances, pub dates are subject to change.)

Eva Crocker’s pedigree is impressive (she is the daughter of author Lisa Moore) and the buzz is huge for this story probing a new generation that’s paradoxically anxious and fearless at the same time. When Stacey is busted and her computer is seized by cops looking for illegal digital material, her world changes dramatically. She’s been living with a false sense of freedom, with few boundaries when it comes to ideas and sex (LGBTQ+ content is strong here) and with meaningful friendships. Suddenly she feels a new vulnerability. This could be the breakout novel of the year. June 2

2. The Loneliness Of A Long-Distance Cartoonist by Adrian Tomine (Drawn & Quarterly)

The brilliant graphic novelist Adrian Tomine (Killing And Dying, Sleepwalk) emerges with a graphic memoir both heartbreaking and hilarious, sparked by a scary medical event that prompts him to examine his life and career. At once looking at his marriage, parenthood and the perils and pleasures of fame, Tomine keeps the images simple but the emotions deep and complex. May 26

3. How To Pronounce Knife by Souvankham Thammavongsa (McClelland & Stewart)

Each word packs a punch in these stories, not surprising since Souvankham Thammavongsa is a celebrated poet. Her debut fiction collection features pieces, some published in Granta, Harper’s and Paris Review, all of them with fascinating premises centring on the day-to-day lives of immigrants and refugees: A young man, a former boxer, paints nails in a salon, for example. A woman learns English from watching soap operas. A school-bus driver tries to cope as his wife has an affair with her boss. Thammavongsa creates characters who are wounded, restless and watchful as they look for a place to belong. Definitely a writer to watch. April 7

4. The Expendables: How the Middle Class Got Screwed By Globalization by Jeff Rubin (Random House)

The latest from the author of Why Your World Is About To Get A Whole Lot Smaller continues his disruptive ways in this analysis of how the collapse of union membership and the near obsolescence of full-time employment is squeezing out the middle class. What’s intriguing about Rubin is that he is a fiercely independent thinker, able to appreciate the ideas of everybody from Naomi Klein to Donald Trump(!). Don’t fret about this last reference – Rubin knows perfectly well that the people who benefit from globalization and the changing market are the 1 percent. April 28

This new novel is everything you’d expect from a book by Emily St. John Mandel: thrilling, complex and absolutely of the moment. A huge Ponzi scheme goes south, taking down numerous fortunes, and a woman seeking asylum vanishes off the coast of Mauritania. Mandel’s last book, Station 11, traced the impact over decades of a deadly flu. She does have a way of seeing the future. March 24

6. They Said This Would be Fun: Race, Campus Life, And Growing Up by Eternity Martis (McClelland & Stewart)

Think university is about cool parties, fast friendships and the exhilarating pursuit of new ideas? So did Eternity Martis, until she left Toronto to pursue her undergraduate degree at Western University. There, she encountered the kind of soul-crushing racism – Blackface at parties, racial slurs on the street, all the anxiety that accrues in being the only Black student in her classroom – that could sabotage a woman’s spirit and all her aspirations. Martis writes boldly about her experience in this unique memoir that testifies to how a support group of women of colour can change someone’s personal narrative. March 31

Better known as a filmmaker and television writer than author, Alex Pugsley makes a fiction debut sure to get attention. His connected short stories (including a Journey Prize winner) are autographically based, but its central character is the city of Halifax where Pugsley grew up. This coming-of-age novel, set in the 70s and 80s, the first in a five-part series, tracks his stoner teens and his drug dealers (rich kids, mostly), small-time thugs and all kinds of children, from private school girls to runaways as he tries to make sense of his city. As his TV resumé attests (Life With Derek, The Gavin Crawford Show), he can be charming and very funny. April 28

8. Sharks In The Time Of Saviors by Kawai Strong Washburn (McClelland & Stewart)

We’re in inundated with images of Hawaii as an island paradise, but Kawai Strong Washburn’s debut novel gives us a wholly different perspective. The story begins in Kailua-Kona in 1995 when seven-year-old Nainoa is saved by sharks(!) after he falls overboard from a cruise ship. His magical powers look like they might save his community, but they become the source of trouble after Hawaii’s sugar cane industry collapses and his family disperses to America’s western parts. Washburn’s reverence for magic and his respect for his island’s legends dovetails with an urgent take on contemporary anxieties. You may not have heard of this author yet, but you will. March 3

9. Daughters Of Smoke And Fire by Ava Homa (HarperCollins)

This novel is the first ever published in English by a female Kurdish writer. It dives into the everyday lives of Kurds in Iran, tracking the extraordinary story of a young woman filmmaker forced to shift her focus and search for her activist brother Chia who has run afoul of Iranian authorities and vanished. When she publishes Chia’s writings and faces her own trouble with the state, she could be rescued by a Canadian friend, but they have a difficult history which makes her distrustful. Homa, now based in Windsor, offers a searing story reflecting her own passionate pursuit of justice for 40 million stateless Kurds. May 12

10. The Certainties by Aislinn Hunter (Knopf)

Aislinn Hunter beat the sophomore slump when her second novel The World Before Us copped one of BC’s top fiction prizes. Her powerful follow-up is written in two threads about refugees, one fleeing war-torn Europe in the 70s, another heading on a ship to the shores of British Columbia in the 80s. This is a meditation on surviving fascism and the ravages of war, but underneath it all – and here’s what makes it timely – is a plea to pay close attention to the experience of refugees. May 23

11. The Subtweet by Vivek Shraya (ECW)

When a struggling songwriter’s song is covered by a famous artist, the women form a friendship that promises to be long-lasting – until it’s sabotaged by jealousies and personal insecurities. Then a single tweet ends a career. Vivek Shraya sings, dances and recently mounted an excellent solo stage show. But her literary output is always astute and her perspectives are unique. April 7

12. Taking A Break from Saving The World: A Conservation Activist’s Journey From Burnout To Balance, by Stephen Legault  (Rocky Mountain)

The climate crisis is an overwhelming phenomenon and eco-activist Stephen Legault knows all about that. He’s been a burnout casualty a number of times and seeks solutions for the malaise, knowing people can’t be effective politically unless they take care of themselves. He has recommendations on everything from diet to organizational restricting – leaves of absence, anyone? Think about it. May 5

Scarborough, now turning into one of Canada’s hottest settings for fiction, figures prominently in this YA novel about a Trinidadian-Canadian teen who specializes in Muay Thai boxing as a means of releasing her tension. She’s all wound up because her father regularly beats her mom. When she accidentally kills him, there’s peace in the house, but not for long – her mother’s found another abusive partner. You can tell by the taut narrative that Kamal is an award-winning thriller writer. Available now

These are bleak times, for sure, so a memoir from someone who merrily defied expectations is welcome. Nanaimo-born Prudence Emery thumbed her nose at her parents’ stodgy demands, decamped to art school in London and later worked in the press office at the Savoy Hotel. There she developed the art of partying with the rich and famous, until she realized her excesses may prove too dangerous and moved back to Canada. Although she settled in Victoria, she, happily, never really settled down. All of this she recalls in amusing detail, while insisting we all live life fearlessly and pursue true happiness. April 25

Shame On Me, a probe into race and identity by Tessa McWatt Michael DeForge’s Familiar Face, his take on life inside the bureaucracy What Can I Do: My Path From Climate Despair To Action by Jane Fonda, whose superb memoir, My Life So Far, proved she’s writer to reckon with The Unseen, Roy Jacobsen’s Booker International shortlisted novel, just translated into English My Mother’s Daughter, the memoir from Canadian hurdler Perdita Felicien.